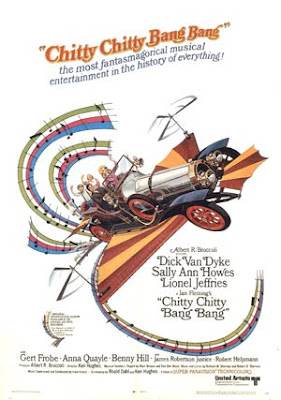 I have a strong attachment to the films and television shows of my youth.

Recently, I had the opportunity to re-watch CHITTY CHITTY BANG BANG. To my recollection, I’d only seen the film once, with vague memories about it since. But I knew it had neat-o steampunk elements. It had romance. It had Dick Van Dyke. So, I pop the disc in the player and hit ye olde play button.

That’s when youthful nostalgia collided head on with grownup reality.

I wanted to really enjoy seeing this film again. Really. But it has so many flaws. It was a chore to finish it. I can’t imagine how it captured the attention of any child, no matter how vast her attention span, back in the day.

And now, with apologies to fans everywhere, I must be the bearer of sad news: CHITTY CHITTY BANG BANG is just a really bad movie.

For one thing, Chitty Chitty herself has nothing to do. She’s the star of the show, but keeps getting shunted aside by yawn-inducing musical numbers. They were clearly just padding. Even the titular theme song sucks. If I had been that car, I’d have had my agent pull me out of the deal on the first day of shooting.

What’s with the whole storytelling sequence? Structurally, it was a very strange tangent. It dulled any sense of danger or tension because within the context of the film, it was all make believe.

Villains? Weak. And far too many of them. (The fact that this story is geared toward children is no excuse for such a scatter-brained approach). The only standout villain was the Child Catcher played by Robert Helpmann. Even the presence of Benny Hill as the Toymaker wasn’t enough to save this film’s sorry ass.

So how could this film be salvaged?

CHITTY CHITTY BANG BANG (1968) was based on the children’s book CHITTY CHITTY BANG BANG: THE MAGICAL CAR (1964) by Ian Fleming (as in Bond. James Bond. Goldfinger’s in the movie, too). It starred Dick Van Dyke as smokin’ hot inventor Caractacus Potts and Sally Ann Howes as the deliciously named love interest, Truly Scrumptious.

Fleming in turn was inspired by “Chitty Bang Bang,” which “…was the informal name of a number of celebrated English racing cars, built and raced by Count Louis Zborowski and his engineer Clive Gallop in the 1920s...”.

I was also surprised to discover that one of the screenwriters was Roald Dahl (CHARLIE AND THE CHOCOLATE FACTORY).

The basic plotline is as follows: An eccentric professor invents wacky machinery, but can't seem to make ends meet. When he invents a revolutionary car, a foreign government becomes interested in it, and resorts to skullduggery to get their hands on it.

Despite such high pedigrees among the cast and crew behind CCBB, director Ken Hughes reportedly hated the finished film. Well, buddy, I feel your pain. This is a classic example of when a bad film happens to a good premise. Instead of Hollywood focusing on unnecessary remakes (THE DAY THE EARTH STOOD STILL, the upcoming MAD MAX redux), why not salvage a story that has proven its timeless potential despite the 1968 celluloid catastrophe?

It needs a complete overhaul. First, trash the godawful musical numbers. Trust me, you won’t miss them. The soundtrack needs to be much more somber. In fact, I recommend darkening the film’s overall tone.

I enjoyed the story’s prologue—that Chitty was a race car nearly destroyed in an accident. Let’s even retain the “found treasure” aspect that brings the car into Potts’ possession. That said, Chitty needs a lot more steampunk elements. She can still transform into a boat and also fly, but I want to see other infernal devices as well.

We need to ditch the storytelling sequences and give this film a more linear plot. Potts discovers Chitty and rebuilds her. Potts loses Chitty. Sexual tension develops between the hero and heroine. Potts, Truly Scrumptious, and Chitty overthrow villain. The End. Oh, and I suppose the kids can stay in the picture.

Did I mention how smokin’ hot Dick Van Dyke was in this film? I almost hate to mess with success in this regard. The newer version would call for an inventor that was a little less bumble and more angst. I’d also give him more sophisticated inventions. Does anyone really remember what his food-cooking machine made? Exactly.

Truly Scrumptious will no longer be relegated to simple love interest. Instead of being the daughter of the candy factory tycoon, she will be the tycoon. Throw in flirtatious bantering, a few smoldering looks, and a Big Misunderstanding to sweeten the pot.

I learned about this trivia from the Internet Movie Database: “Helpmann's character [The Child Catcher] has often been named as one of the scariest characters ever to be brought on screen.” Now, I wouldn’t go that far, but he was definitely solid villain material. I recommend expanding his role to make him the sole villain of the story. Drop the child catcher angle and keep it simple: he’s out to steal Chitty for his own nefarious plan of world domination. He commands a fleet of airships and other mad steampunk wonders.

More airships, more battles, more Chitty. I don’t care how it’s done, but at some point in the remake, CCBB should battle the villain’s fleet of airships. I must see this scene before I die.

Postus Scriptus: My intent with this post is to rethink how a good concept could be remade into something better—not offend any members of the Chitty Chitty Fan Club, who I assume must be out there.

However, having said that, if you're one of the people who immediately think, "Hey, I LOVE that movie," I have to ask: When was the last time you saw it? There are films I loved as an 8 or 9-year-old that I would have a hard time sitting through now. This, as I just discovered, was one of them. I was pretty excited when I first found the DVD.

What about you? Any films that rocked your cinematic world in second grade, but turned out to be less than great later...?