I came across The Grand List of Overused Science Fiction Cliches recently. It was so much fun I had to share. As I perused the list, I found myself laughing (at myself) because while I recognized so many of the clichés I don’t always question them. Sometimes it’s because when it comes to niche genres, beggars can’t be choosers. Other times I’m willing to suspend my disbelief beyond the call of duty.

But I could definitely question some of them more often. Many of the clichés listed are the result of lazy worldbuilding or poor execution. On the other hand, there are those that can be recycled and still deliver quality stories.

The following either had me chuckling with delight or made me go “Hmm….”: 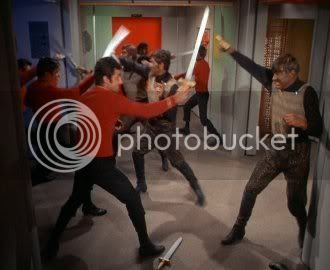 * The Good Guys are always human, while The Bad Guys are never anything but the most inhuman and / or disgusting species availible.[sic]

* Women who are small-breasted, uncurvy or otherwise "not feminine" are never important.

* An entire world of peaceniks and pacifists who have absolutely no military or planetary defenses of any kind.

* If the heroine and hero initially hate each other, they will become best of friends and lovers. Resistance is futile.

* Villainesses are either elderly battleaxes or promiscuous young temptresses.

* The main male character romances many different women before settling on the main female character, even though she has been available all along.

* Enitre[sic] planets are used as rubbish tips. Recycling has disappeared in the future.

* Even in the 50th century, after Faster Than Light Travel and A.I. have become common technology, it doesn't seem to be possible to get a radio to work on a spaceship : radio transmission is always filled with static, screeches and sound distorsions, especially if it's a SOS or a warning message.

* However far the into the future a story is set, and however advanced the civilizations are, all space vessels in the era lack simple circuit breakers. An energy beam attack or sudden energy surge therefore causes computers on the ship to explode, usually only on the bridge, killing or incapacitating at least one character.

Which ones made you laugh? Which ones annoyed you or caused you to reflect? Which ones do you still enjoy reading, or in the case of authors, using?