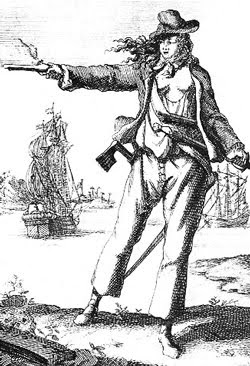 In RT BOOK REVIEWS’ October 2009 feature on science fiction romance, this quote by author Susan Grant made my jaw hit the floor so hard it woke up in China:

“For my space pirate book, I’m not allowed to use either ‘space’ or ‘pirate’ in the title…because marketers say books with those titles don’t sell.”

While attempting to rein in my abject horror over this outrageous state of affairs, I did a little Googling and came up with an interview AAR had with some Avon editors. This bit in particular caught my eye:

Staffer Lynn S. asked, “I know it varies from house to house, but is there a formula for titles that authors and publishers use? Secondly, how important is a title when it comes to book sales?”

Lynn notes that “…while I did not hear back from Ms. Macro on this one, I was informed by Avon that, ‘It's no secret that certain words in the title (or rather English "titles" in the title) will make an author sell more copies. I think readers like to read about dukes. And there are words that just never work in a romance title.’”

“Words that just never work in a romance title”? What kind of marketing conspiracy is this?

Women who love science fiction romance are legion. We cut your hair. We clean your teeth. We sell you insurance. We work at NASA. We teach in your schools. You can find us at hundreds of genre conventions a year across the United States, and probably abroad as well. We congregate online in countless SF and romance forums. We grew up on STAR TREK, STAR WARS, and all their incarnations.

We are exactly the type of readers who will pick up a book because it has “space” (or “cosmic whatever”) and/or “pirate” in the title. To me, at least, space pirates or some variation therof is inherently romantic. Why would a publisher want to throw all of those sales away? Yes, a romance publisher needs to target romance readers, but there’s a limit to which you can target a general audience with a niche product. When it comes to science fiction romance, I think they might be looking for readers in the wrong places.

Is the use of “space” or “pirates” in an SFR title the cause of poor sales or is it merely correlative? Big difference there. How can you measure such a thing? Even a poorly written book with an outlandish title can do well with the right marketing. Not usually, but it can happen. But even if a good book with “space pirates” in the title tanks, it’s not just because of the title. Maybe there wasn’t enough of a marketing strategy in place, or the publisher didn't print enough copies. Maybe the timing was off.

By the way, can someone please point me to the romance books that had “space pirate” in the title and the hard facts behind their reportedly poor sales? I don’t claim to know every SFR in existence, but I have yet to even come across one titled with those words.

Also, do historical romances with the word “pirate” in the title also do poorly? I wasn’t aware they did so badly. Seriously, if Ms. Grant wanted to name her book “Seducing The Space Pirate,” would marketing allow it?