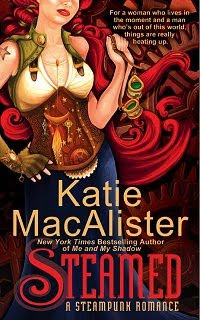 Is this a great time to be alive, or what? STEAMED (February 2010) is the first in a series of steampunk romances from bestselling author Katie MacAlister. Here’s a bit about the story:

…they wake up to see a woman with the reddest hair Jack has ever seen-and a gun. Octavia Pye is an Aerocorps captain with a whole lot of secrets, and she's not about to see her maiden voyage ruined by stowaways. But the sparks flying between her and Jack just may cause her airship to combust and ignite a passion that will forever change the world as she knows it...

I had the pleasure of interviewing Ms. MacAlister about STEAMED and the process of writing it. Read on to learn what super-heated aether, Nikola Tesla, and THE LEAGUE OF EXTRAORDINARY GENTLEMEN have in common.

The Galaxy Express: What inspired you to write a steampunk romance?

Katie MacAlister: Sometime early last year I had an itchy feeling that translated into a desire to write something new, something different, something that was going to knock readers’ collective socks off. I mulled over my choices, and wasn’t happy with any of them. One day I was talking with my editor about this itchy feeling, and a word suddenly glowed with blinding brilliance in what passes for my brain—steampunk. As a life-long history and science buff, I knew that steampunk would fit well with my character and voice, and to make it a romance? Oh, that was sheer bliss.

I took a look around, saw that there was little steampunk being published, and even less in romance, and knew I was onto something fresh and new that would hopefully excite readers as much as it did me.

KM: The heroine of this new series, Octavia Pye, is a captain of a somewhat small and outdated airship named Tesla (because what would steampunk be without a Tesla somewhere?). She wields a gun that shoots super-heated aether, rides in both normal horse-drawn carriages, and steam-powered carriages, and has been known to turn her hand to the automatic navigator, a clockwork device that keeps the Tesla on course.

TGE: Who wears the brass goggles in the relationship, Jack or Octavia?

KM: Jack, definitely Jack. Octavia doesn’t understand his fascination with them at all, because to her, they are a mundane item necessary when one is checking the boilers. Jack, however...well, Jack is from our reality, and a big fan of steampunk, so when he finds himself in Octavia’s world, it’s a dream come true. He’s like a kid in a clockwork candy shop.

TGE: What kind of challenges did you face integrating a romance with steampunk worldbuilding?

KM: Honest? Nothing special. It’s the same as writing a convincing romance in any world. The same sorts of concerns come up—are the characters meshing, does their romance seem reasonable based on their characters, do their emotions go on an emotional journey that ends up with them falling in love, etc. The steampunk aspect of the story just enhances the relationship, giving it a unique flavor, and lending the characters a realistic background, even if the world itself is an alternate view of reality.

TGE: What are some of your favorite steampunk books/films?

KM: I haven’t read much modern steampunk that I’m wild about, other than the League of Extraordinary Gentlemen graphic novels, which is one reason why I wanted to make my own version of it. Older works are another matter—I’m a huge fan of a lot of the late nineteenth century/early twentieth century “scientific romances” of Arthur Conan Doyle, H. G. Wells, and of course, the grand master of all things steampunk, Jules Verne.

Films...my favorite would have to be the screen version of League of Extraordinary Gentlemen. To me, that movie embodies all the tongue-in-cheek fun there is to be had in steampunk.

TGE: Can you share any details about your steampunk novella work-in-progress?

KM: Since the novella will be released a month before Steamed, I wrestled with just what I was going to write that wouldn’t spoil the story for readers. Eventually, I settled on telling the story of how Octavia’s foster parents met. It has bearing on both Steamed and subsequent books in the series, so I think it will be a good way for readers to dip their toes into my steampunk world.

TGE: Is there anything else you’d like readers to know about STEAMED?

KM: One of the questions I get with frequency is when I will be writing another contemporary book. Even though Steamed is a steampunk book, and obviously has historical elements into it, it also has a very contemporary feel in that the hero, Jack, is a very modern guy. Jack and Octavia share the narrating duties, so I hope that readers will feel like they experience both Octavia’s world, with all its steampunk fabulousness, and Jack’s modern take on that. It’s contemporary, it’s historical, and it’s steampunk—there’re just all sorts of layers to it that I had great fun writing. I’ve also got a major crush on Jack, but we won’t go into that...

Thanks, Ms. MacAlister! It was exciting to learn more about your book.

And, don’t forget to visit Dear Author as I guest blog about The Case For Steampunk Romance.

Next up, steampunk news, articles, and free reads!