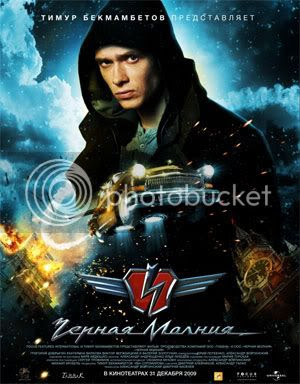 This is why I love, love, love to blog about science fiction romance no matter how tenuous the connection: There’s a forthcoming film on the horizon that’s a blend of superhero SF, romance, action, and a flying Volga that puts Chitty Chitty Bang Bang to eternal shame.

From the imaginative producer Timur Bekmambetov, who gave us NOCHNOY DOZOR (NIGHT WATCH), and its cinematic sequel to the Russian fantasy tetralogy, we will soon have CHERNAYA MOLNIYA, a.k.a. BLACK LIGHTNING.

The film site Twitch posted the image and the story premise:

This is a story of Moscow University's student who becomes the owner of ordinary from the first sight, been-used, but... able to fly "Volga" car. With this car he will be able to not only avoid Moscow traffic jams, but unexpectedly for himself turn to city's defender, mysterious fighter against Evil.

Here is the kickass trailer for this awesomesauce of a film:

Did you see the strong thread of romance woven throughout the trailer? It’s Peter Parker and Mary Jane all over again!

фантастический! What a great way to spend New Year’s Eve!