What Is Your Excitement Threshold? 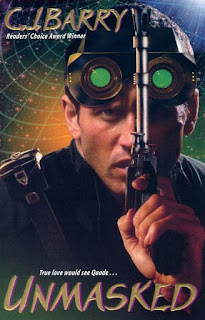 I’m a big believer in high stakes and lots of story tension. I enjoy action and adventure in my science fiction romance, but I can just as easily appreciate the high stakes and tension in an emotionally heated verbal exchange. Not only that, but I rejoice when authors torture their heroes and heroines. Yeah, give it to ‘em! You know they want it.

Reader taste is subjective, of course, and I’m the first to admit that for romance in general, we should have varying levels of story intensity to meet the needs of different readers. In the case of SFR, however, there’s a preponderance of elements that lend themselves to high-octane stories. For the audience seeking such tales (as well as those who would enjoy them but just don’t realize it yet), I wish authors would exploit these elements more than they currently do.

Unfortunately, there are science fiction romance stories wherein authors think they’ve put their characters through the wringer when in fact it’s more like a light rub with a soft sponge. Or a premise promises high stakes, but the execution doesn’t deliver.

Heartfelt romance and high stakes are not mutually exclusive. In fact, for me the romance provides solace and an amelioration of any suffering undergone by the hero and heroine. But I wonder if there’s a belief or unspoken rule that because a romance is involved, the other plot elements or the interpersonal dynamics of the h/h shouldn’t go beyond a certain level of intensity, which perplexes me as far as a hybrid genre such as SFR goes.

One shortcut device that undermines the development of high stakes is telling. More than I’d like, for example, I’m told how tough the heroine is without actually reading about her in action. The same goes for action/combat/gritty scenes. I’m not calling for gratuitous, NC-17 violence, but rather for less sugarcoating. As far as action scenes are concerned, I’d like to encounter more realism, less cutting away, less telling, and more showing. (And a few more buckets of blood might be nice).

Sometimes it’s a matter of word choices—like the difference between a character rising from a chair and leaping from a chair. Occasionally, I read passages thinking, why am I not feeling a visceral response here? Then there have been times when I read a sentence or even just a phrase and I get the strange sensation that the author thinks the scene in question is a lot more exciting than it actually is. Downright spooky, I tell you. And a real bummer, because I love it when it seems as though the author has read my mind and I are on the same wavelength.

Other times, the hero and heroine don’t seem to have to work very diligently to achieve their Happily Ever After. Usually this is a result of the story having little conflict to begin with (whether external or interpersonal, or both). Or maybe the conflict is there, but an author’s word choices have muted it. I try to avoid guessing plot twists because I like being surprised, but when I have no doubt the hero/heroine will escape unscathed from any given danger then for me, that’s a red flag. I should be experiencing all kinds of doubts and anxieties about the couple’s ability to succeed in the mission as well as the security of their HEA.

It’s important to note that not every book by these authors is high-octane, at least by my definition. Nor do they need to be. My goal was simply to point out examples of stories that don’t flinch from high stakes and high levels of tension when such entertainment is promised from the beginning. It doesn’t mean that stories outside of this mold are of less quality—far from it. But there are some that could have used a boost of octane given what the authors initially promised to deliver.

I understand why digital/small presses have more freedom to experiment with high-octane stories, but as the above examples demonstrate, it can be accomplished in the realm of mainstream print publishers as well. Perhaps it takes achieving the level of a Bujold or Asaro to gain such creative freedom, but still, it can be done.

Now to revisit my question: What’s your threshold? Do you think science fiction romance has sufficiently exploited its potential for high-octane stories, or is there room to expand?