Ladies and Gentlemen, I am thrilled to unveil the covers and story blurbs for IMPULSE POWER & MEN IN SPACE, Samhain Publishing’s forthcoming space opera anthologies! Thanks to anthology editor Sasha Knight, my esteemed passengers get the first exclusive peek (the information isn’t even listed on the publisher’s site yet).

The IMPULSE POWER anthology includes three m/f romances. MEN IN SPACE is the title for the collection of three m/m romances (hmm, remember when I expressed interest in more m/m SFR?). The covers for each trio of stories also combine to form two tapestries which I also have the pleasure of sharing with you. Cover artist Kanaxa designed them both. 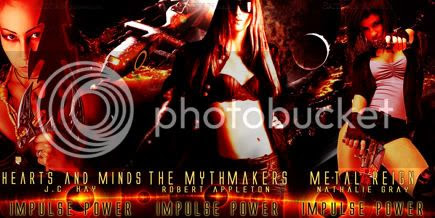 I’d like to extend a special congratulations to anthology author Nathalie Gray who’s a regular here at The Galaxy Express.

Now, on with the show! 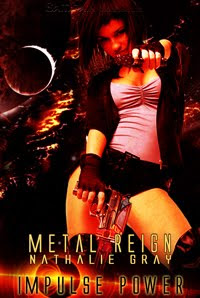 The invaders thought they had crushed humanity. They messed with the wrong species.

Francine Beaumont is tired. Tired of waiting for an armada of Imber ships to finish off what’s left of humanity. Tired of fear and privation. Tired of living like a rat, feeding off what scraps the cat lets her have.

When the chance comes to hit the Imbers where it really hurts—right at their fuel supply—she takes it. One stealth cruiser. One pilot. A cargo hold filled with explosives. A suicide mission for sure, but better that than doing nothing.
As the ship’s cook, John O’Shaughnessy knows everything that goes on aboard the warship. And something is definitely up with his Frankie. If she thinks he’s going to let her carry out this crazy plan of hers alone, that stubborn woman has another think coming.

Frankie thinks she’s gotten away clean…until her instincts tell her she’s not alone on her mission. Still, it’s a shock to find her peace-loving John standing there with eyes that spell murder. Now is a hell of a time to discover they’re more than friends. But there’s no turning back…

Warning: Space invaders were seriously harmed in the making of this story.

And here are the rest: 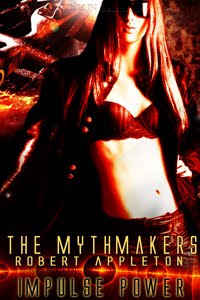 THE MYTHMAKERS by Robert Appleton

The last will and testament of a forgotten Earth…

For Captain Steffi Savannah and her crew of deep space smugglers, life has become little more than a dogged exercise in mere survival. Their latest disastrous heist ended with another dead crew member—and no place left to hide. She’s even finding it hard to dredge up any excitement over the giant, crippled ship that appears on their radar, even though it’s the salvage opportunity of a lifetime.

They find that it’s no ordinary alien vessel. It’s a ship of dreams, populated with the last remnants of Earth’s mythical creatures. Including the blond, built, mysterious Arne, one of a race blessed with extraordinary beauty—and few inhibitions. Though he won’t tell her exactly what he is, in his arms Steffi rediscovers something she thought she’d never feel again. Wonder, love…and hope.

It isn’t long, though, before the Royal guard tracks them down, and Steffi and her crew are faced with a terrible decision. Cut and run. Or risk everything to tow the ship and her precious cargo to safety. 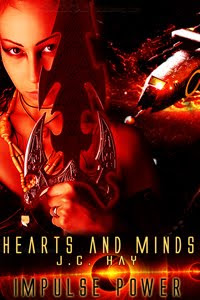 Working together is unavoidable. Falling in love…inevitable.

Syna Davout thought it was supposed to be a simple smash-and-grab job—smash onto a luxury yacht, grab the cash, and split the proceeds with the client. Unfortunately, the client failed to mention that she’s the diversion for an assassination attempt that destroys the yacht and leaves her with a passenger she never expected. A fugitive telepath caught in the middle of a revolution.

Galen Fash thought his days were numbered. The fledgling revolution on his homeworld needs him to buy them time, with his life if necessary. The last thing he needs is to get involved with a pirate captain-for-hire whose larger-than-life emotions draw him like a moth to a flame.

Inexorably, Syna is dragged into a war that isn’t hers, and they both discover—between knock-down-drag-outs—that their whole is far stronger than the sum of their parts. Dodging the enemies that want them both dead will be hard enough. First, they have to survive each other…

Warning: this book contains Space Vikings, gossipy AIs, boxing-as-foreplay, rogue telepaths and a demanding pirate captain who likes to be in charge. The author will not be held responsible for a desire to punch your partner in the jaw, or a sudden awareness of latent psionic ability. 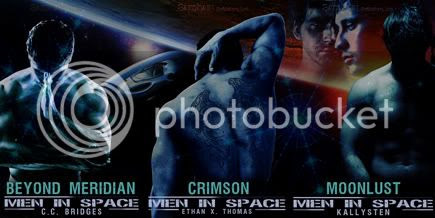 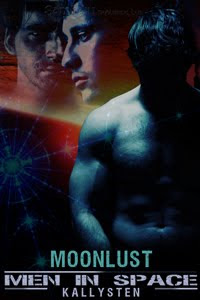 In space, no one will hear them moan.

The job was supposed to be an easy one for Captain Kar and his two-man crew: land the Danaus on the deserted moon, appropriate a few boxes of precious chromore, and jump out of the system before the Guardians could get to them. Even Will and Jay’s inability to keep their hands off each other for any length of time should not have been too much of a problem.

They discover too late it’s the laineards’ mating season. The resulting sexual pheromones begin to affect them as soon as they step off the ship. With Will and Jay losing their minds to lust, and Kar himself blinded by visions of the two men he has wanted for months, things suddenly get much harder than expected.

Their only hope for not ending up in jail is to get out of there before the Guardians find them. Except an open loading dock contaminated the air inside the Danaus. And Kar will have to resort to drastic measures to keep Jay and Will apart long enough to escape…

Warning: The Lodge does not endorse or otherwise approve of this sexually charged M/M/M rendition of one of its elite members cavorting with the crew of a thieving spaceship while under the influence of pheromones-induced, overwhelming and all-consuming lust. 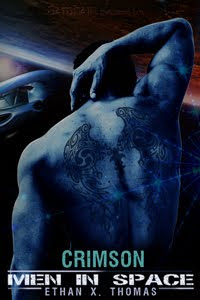 Humiliated by the betrayal of his former Master, Lieutenant Benjamin Kraft will do anything to bring the drug czar Tazu to justice—anything but kneel again. Forget passion too. He’d rather risk daily grow-op raids. Then, just when Tazu is finally within reach, an ambush wipes out Ben’s entire squad and threatens the life of his partner—a partner he never realized he cared about, much less loved.

As a member of a former slave race known as starlings, Adam’s speed and strength make him a valuable asset to the police force even as his blue skin inspires prejudice and derision from the other officers. Ben’s always been able to look past that, so what’s changed? Suddenly his partner is rude at every turn. Ben may try to get rid of him, but too bad; Adam won’t be scared off. He has his own reasons for wanting to bring Tazu in, and he’ll do it even if it means putting Ben in his place.

Even if it means acting as Ben’s Master on their next mission: an investigation on a planet where sex is everywhere, and where whips and chains are the norm... 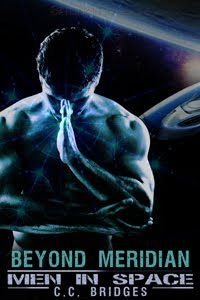 BEYOND MERIDIAN by C.C. Bridges

Two men. One passion. No choice.

Captain Rick Raine got more than he bargained for when he agreed to take on a brash young man as a crewmember along with contraband cargo. Karl’s spirit intrigues him, but he didn’t sign up for battling privateers, the United Planetary Alliance—or his traitorous body’s response. Especially to a naïve kid who cheats at holo poker and knows a whole lot more than he should.