Should Blond Heroes Have More Fun? 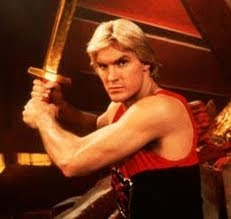 In romance, there seems to be a preponderance of ebony-haired heroes. My guess is that their prevalence cuts across all of the sub-genres about equally. Vampire heroes especially are mostly dark-haired (at least on the covers), which I’m assuming is a symbolization of their supernatural and dangerous qualities.

All of the above got me to wondering about blond heroes in science fiction romance. I don’t recall very many of them. The only blond science fiction romance hero I can currently recall with extreme clarity is Turner Pascal from SUNRISE ALLEY by Catherine Asaro. Thanks to a tip by Enduring Romance’s Kimber An during our recent discussions on branding SFR, we know that Susan Grant’s STAR PRINCESS has a blond hero (Prince Ché Vedla). And when I ran the feature on Samhain Publishing’s forthcoming space opera anthology, we learned that Robert Appleton’s story will feature a blond hero.

Okay…that’s three. Which makes the ratio of dark-haired heroes to blonds in SFR about 20 to 1. So, are blond heroes not alluring enough?

Does the trend toward dark-haired heroes represent a more progressive attitude toward depicting heroes in general—i.e., hair color isn’t a significant indicator of inherent goodness/ethical behavior as it often was in old skool pulp SF? What about a blond-haired hero as a worldbuilding detail? Should it be used judiciously to avoid falling back on descriptive shorthand? Or is the prevalence of dark-haired heroes its own shorthand, that of the mysterious hero with a dark past who exists to enthrall the heroine with his sexual prowess?

What about in other mediums? Here are some of the male film and television science fiction romance blond/dirty blond heroes (or more specifically, romantic SF heroes) that stood out to me:

What are your thoughts about blond heroes in science fiction romance? Want more of them, or is hair color inconsequential to you? Authors, do you tend to avoid using them because they’re not considered “dark” enough for the current market, or does it truly not matter?