An Oldie But A Goodie: JARAN by Kate Elliott 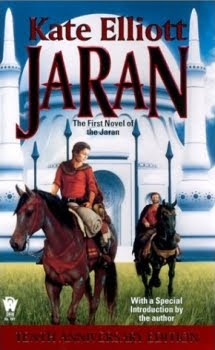 One aspect of science fiction romance that I find both enjoyable and challenging is that it has a tendency to take on a different form at times—you know, kind of like a Transformer (my favorite one is Soundwave if you must know. Remember the cadence of his computerized voice when he uttered the line, “Laserbeak, transform!”? Too cool for skool, that robot). Anyway, such permutations involve several factors such as the time period in which the book is written, the individual author’s style, and the sub-genre’s hybrid nature.

Some time ago, I’d learned that quite a few readers placed Kate Elliott’s JARAN under the science fiction romance umbrella. So when I had some birthday dinero burning a hole in my pocket, I bought JARAN to read and discover the adventures therein. Now that I’ve finished it, I’d like to highlight a few bits of the story’s personality so the fine passengers of this locomotive who haven’t read it can decide if it’s a book they’d like to try. Here’s a minimalist description of the story.

I will endeavor to keep this post spoiler free.

JARAN was originally published in 1992. According to the author’s introduction in the 2002 tenth anniversary edition (the version I read), she wrote the first draft of the story from 1980-81. In the decade that followed, the manuscript went through “seven major revisions.” While I knew nothing about the story going in (I even avoided the back cover copy), I’m glad I read the introduction because it helped shape my expectations for the story. After having read a slew of recently released books, I had to re-orient myself to both a new-to-me author as well as the style of an SF book written nearly thirty years ago.

The version I read is 494 pages long. It’s epic in length and pacing, but not so much in scope. The reason I conclude that is because the majority of the story is narrated from the heroine’s POV. To me, JARAN felt like a heroine-centric coming-of-age tale with a singular focus on the point in her life when she develops a relationship with the hero. In other words, the romance in this book does quite a bit of heavy lifting. The length allowed for nearly equal development of both the romance and the external plot—or rather subplots as it’s difficult to pinpoint any one of them as more important than the other.

Another aspect of the book I found interesting is that, stylistically, it read like a fantasy much of the time. This is because there’s a quest involved in a low tech setting, and the execution uses many fantasy tropes (not a bad thing unless you just don’t feel like fantasy at the moment). If you’re coming to SFR from a strictly fantasy reading background, then JARAN is a great place to start. Also, if you love fantasy romance, then you’ll probably enjoy it as well.

The high tech science fictional elements serve to bracket the coming-of-age story more than anything else. Let me put it this way: If you’ve always been fascinated by Star Trek’s Prime Directive, then JARAN explores that theme in an interesting way. I enjoyed learning how it significantly impacted the romance.

JARAN is a very character-driven story, almost to the exclusion of other elements at times. Even when the heroine, Tess Soerensen, wasn’t with the hero, she was often thinking about him or discussing him with other people. Speaking of the hero, Ilya Bakhtiian is an intriguing example of a non-jerk Alpha hero. He’s intelligent, a warrior, and driven to lead. He’s also arrogant and ruthless, but the author provides clear motivation and gives the reader a direct window to the forces that shaped his personality. The romance in this book is between two mature, deeply contemplative people. Incidentally, all of the lovemaking scenes occur behind closed doors.

Slight, non-major spoiler if you have certain expectations for a heroine’s physical relations: Prior to realizing her true feelings for Ilya, Tess has a few healthy sexual relations with two other men. This is, after all, the future, but it’s also a normal component of the culture in which she’s immersed at the time.

Also, JARAN is the first in a series. It works as a stand alone, especially as far as the romance is concerned (some might consider it a Happily For Now). However, if you’re a plot gal or guy, there is one thread left unfinished (a political one that’s a set up for the next book). I wasn’t frustrated by it, but your mileage may vary.

Overall, the mix of SF and romance in JARAN met my expectations for the sub-genre. It holds up very well, and I was intrigued by how Kate Elliott executed and merged the romance and science fictional elements. I definitely recommend it if you're in the mood for a science fiction romance classic.