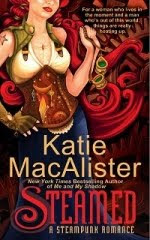 …they wake up to see a woman with the reddest hair Jack has ever seen-and a gun. Octavia Pye is an Aerocorps captain with a whole lot of secrets, and she's not about to see her maiden voyage ruined by stowaways. But the sparks flying between her and Jack just may cause her airship to combust and ignite a passion that will forever change the world as she knows it… 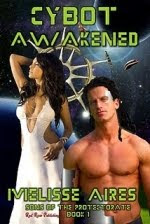 Sabralia lives a lonely but luxurious life in Emperor Sirn’s Harem, her only companion is her obedient servant, Qy, a cybot. Her life has largely been controlled by others, but when Sirn demands his Harem pleasure his Commanding Officers at a victory celebration, Sabralia makes a daring plan to hide to avoid rape by Sirn's men. The Palace is ambushed and her cybot gets her off world. The impossible has happened−Qy the gentle cybot becomes the man he once was, the warrior Kaistril. Pursued for valuable information, Sabralia is thrust into dangerous, unfamiliar situations where she must stand up to the challenges, or lose the man she loves.

Everything they knew is gone.
From the raging fires, five men emerge with extraordinary new powers. They must learn how to survive this dark, ravaged world ... but they cannot do it alone. 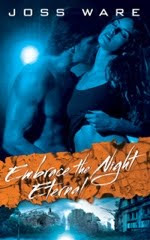 Simon Japp will never forget his violent past. But when civilization is all but destroyed, he sees his chance for redemption. Blessed with a strange "gift," he's determined to help the resistance against the Strangers, the mysterious force that stalks them at every turn. He can't afford to get distracted, even by the stunning, soft-spoken woman fighting by his side...

Sage Corrigan has learned to be careful where she places her trust. But she sees something good in Simon, even if he can't see it in himself. Posing as lovers to infiltrate a group key to their fight, they find that their staged affection soon develops into a desire that will leave them fighting for their lives in the night eternal...

Also out from Samhain this month, HIGH OCTANE by Kathleen Scott:

Two hearts are never more than one dimension apart. 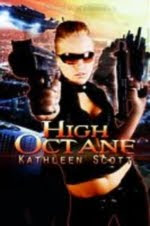 A routine fuel run through one of the planet’s dimensional portals explodes in violence when Major Geneieve Lockhart’s Jumper team is hammered with an unprovoked attack. With her ship disabled and contact to mission control limited, Genie faces her worst nightmare—losing her crew on the blood-soaked floor of a foreign desert.
Help comes from an unlicensed freelance mercenary ship, piloted by a man she never thought she’d see again. Her AWOL ex-lover, Lt. Col. Dante Bowen.

Bowen knows answering Genie’s distress call puts his undercover mission to expose a governmental conspiracy at risk. But after faking his death six years ago, he owes her something. Ending up chained in her cargo hold for transport to his own court martial wasn’t the thanks-for-the-rescue he expected.

The bridges between them may be in ashes, but their desire burns as hot as ever. Even as Genie wonders what happened to Bowen’s code of honor, her body betrays her heart at every turn. The hostile race that attacked her ship, though, is coming back to finish them off. The only way to ensure freedom—on both sides of the dimensional divide—is to put her trust in the one man who betrayed it…

Whew, and I'm just getting started!

Embrace the Shadows presents an interview with Robin D. Owens. 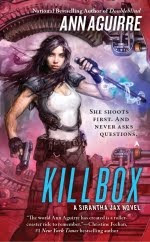 Sarah A. Hoyt (DARKSHIP THIEVES) guest blogs at SFSignal: The Death of Science Fiction: It Ain’t Over Til The Fat Droid Sings. She speculates on why young folks seem to be aversive to reading science fiction. Here’s an excerpt that I think has relevance for science fiction romance:

There will always be a place where science is utterly proven and can be extrapolated along safe, almost sure lines - and that's fine. But it doesn't leave much place where people can dream. And people need to dream… I'm not saying that space opera and "looser" (softer usually means message-oriented) sf don't exist - Kevin J. Anderson and Lois McMaster Bujold, David Weber and indeed any number of writers from Baen give this the lie. I'm saying it is neither as loose as in media, nor is there nearly as much of it as there should/could be. We're not only not going for all the market can bear, we're not touching the market out there.

Discover if SFR by authors Angela Knight, Gena Showalter, and Deirdre Knight are for you courtesy of two posts at Spacefreighters’ Lounge: In Search of New Reads, Part I & Part II

Stuck for a title for your steampunk romance? Lisa Paitz Spindler brings on the Steampunk Manifesto Title Generator

Two neat posts from Blog, Schmog: Linnea Sinclair: Romantic SF is not a contradiction in terms & The SciFi Military Paradigm (in which proprietor Bart addresses the question, “Why is the Navy the model for Science Fiction military, not the Air Force ?”).

In The Female Action Hero, Fantasy & SciFi Lovin’ News & Reviews asks, “But were these women really tough or merely ornamental?” (It’s an older post but totally worth visiting just for the smokin’ hot image of Sigourney Weaver from ALIEN)

Edited to add: So you can more easily look up information on new releases by year, I started a list on the right sidebar under "SFR Specials" for links to the new release roundup posts. Also, I added more authors to the left hand column under the "2010" heading, so check 'em out!