“What’s Magma?” & Avoiding Speaking Down to Your Audience The quote in the post title refers to a line from VOLCANO, a 1997 film about—you guessed it, a volcano. When the titular terror threatens the city of Los Angeles, Emergency Management Director Mike Roark (Tommy Lee Jones) teams up with geologist Dr. Amy Barnes (Anne Heche) to prevent a catastrophe of Epic! Proportions!

But it wasn’t the film’s cheesetastic plot that left an indelible impression on me. No, that honor goes to the line uttered by Roark shortly after he meets Dr. Barnes. While the good doctor is providing him a basic—and I do mean basic—overview of how volcanoes work, she uses the word “magma.”

To which I responded, WTF?

A little part of my bran died when I heard that line. Not only did Tommy Lee Jones appear painfully embarrassed and bored while reciting it, but clearly the screenwriters assumed audiences had an IQ about as low as, well, magma. They certainly defied credulity by indicating their protagonist had never heard of it. Wince-worthy, to say the least. I’ve remembered this line for so long and with such clarity because it made me realize that while it’s important to avoid losing a viewer or reader with complicated technobabble, artists occasionally take such a technique to extremes. 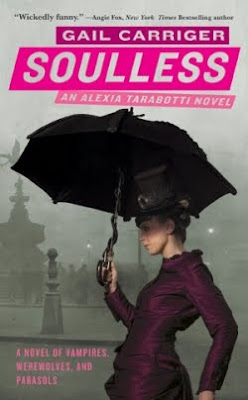 My longtime sordid affair with “What’s magma?” became relevant for me again after finishing Gail Carriger’s SOULLESS (which is straight up paranormal romance with steampunk elements). Her book prompted me to reflect about the learning curve issue when I encountered historical terms with which I was unfamiliar.

I had difficulty wrapping my mind around some of the clothing descriptions (even with historical romances under my belt). “What’s magma?” Tommy Lee Curtis asks. Well I’ll see your magma and raise you a “What the heck is a gaiter?”

But the steampunk and paranormal elements? A cinch.

[Slight Spoiler Alert!] I had no trouble envisioning the author’s automaton character. (As an aside, she merged elements of both golems* and automatons which made me go, hmm based on previous knowledge, but your mileage may vary.) [End Slight Spoiler Alert] And of course, I immediately grasped the “Babbage engine” reference pretty much with both mental hands tied behind my back. I even noticed elements of HELLBOY in the story (e.g., HELLBOY’s “Bureau for Paranormal Research and Defense (BPRD) compared to SOULLESS’ “Bureau of Unnatural Registry” (BUR)). This is not to say that I think Ms. Carriger intentionally swiped the idea; rather, that I brought to the book a certain subset of knowledge that considerably shortened my learning curve regarding the paranormal and steampunk elements.

That said, I appreciated that the author didn’t spell out all the clothing references via inane "As you know, Bob..." dialogue and I certainly didn’t expect her to do so. When reading, I believe that part of my job is to either look up an unfamiliar term and/or read more tales in the genre to increase my knowledge of such elements. For me, learning something new is one of the enjoyable aspects of reading.

What’s your perspective on the learning curve in science fiction romance, especially compared to other sub-genres of romance?

Postus Scriptus If you like golems and steampunk, I heartily recommend Alexander C. Irvine’s THE NARROWS.