Here aboard the Galaxy Express, we’ve discussed the issue of science fiction romances involving humanoid aliens, others involving non-humanoid aliens, and the pros and cons of zoomorphism in science fiction romance. All well and good, but many of these stories feature romances between Earthlings and heroes/heroines from other worlds—human heroes and heroines, that is. 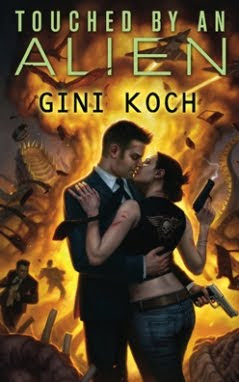 When I referred to the existence of fictional “aliens who share human DNA—sometimes as much as 100%” in my post on zoomorphism, author Jennifer Andersen (DEMONKEEPERS) encouraged me to develop a post on the subject. I thought, heck yeah, because I have a unique, academically stringent, and scientifically ironclad theory about the existence of aliens who resemble us down to the last atom.

Here it is in a nutshell: because we humans evolved here on planet Earth, it goes without saying, really, that they will also evolve elsewhere in the universe. Their location or whether we ever meet them is inconsequential. See, I just happen to know for a fact that the possibility of their evolution is 100%.

Okay, so my theory is about a hundred hypotheses short of a statistic. The truth is, I have a deep-seated fear that we are the only humans in the universe, past, present, or future. I don’t rightly recall when I first developed this fear (possibly sometime during my angst-filled, SF-obsessed adolescence), but I know I frequently resort to my special comfort theory whenever I encounter fictional aliens who are, for all intents and purposes, human like us. As a result, I feel less alone.

I feel immortal, even.

In truth, we would most likely experience extreme difficulty relating (linguistically, emotionally, psychologically, and physically) to genuinely alien aliens. So the widespread technique of creating human aliens nips that little bugger of realism right in the bud, especially where interspecies romances are concerned. In My You Look Lovely Tonight, Crystalline Entity, Syaffolee asks, “And if you’re trying to put some humanity into them, well, wouldn’t it just be easier to make them human?”

Stylistically, it is a whole lot easier. The choice to make the hero or heroine’s alien love interest simply a hot bod from another planet slashes worldbuilding efforts by over half. Language barrier? No problem: They could learn English, for example, by watching broadcasted signals from television series—like ALF! Plus, there’d be no need to worry about sexual compatibility. Easy peasy. The story then remains focused on the romance rather than on the heroine’s adjustments to the hero’s alien physiology. In other words, there’s no question about who’s doing what to whom.

On the other hand, I have difficulty engaging with alien heroes who are nothing more than exotic “I’m too sexy for my ray gun” studs whose sole purpose seems to be the awakening of a virginal heroine’s sexuality. I also question if a hero hails from a patriarchal culture. Not saying it couldn’t happen, but my hope is that when it applies, authors and readers are constantly re-evaluating the idea of patriarchy in a futuristic setting. Does it make creative sense to perpetuate such a trope?

My concern with human aliens is not so much the nigh-impossibility of their existence as how an author portrays them. When reading stories with heroes and heroines, I start evaluating how much trope (both romance and SF) is involved in their character development. I also assess the tone of the story as well as the level/sophistication of the worldbuilding. Some tales are more successful than others in creating believable, just-different-enough human-type aliens.

I’m happy to make the acquaintance of human aliens in science fiction romance. All I ask is that they prompt me to reflect on what it really means to be human, and to assure me that we're not alone.

What aspect do you enjoy about aliens who are basically human? Is there anything about such characters that you’d like to see explored, changed, or abandoned altogether?