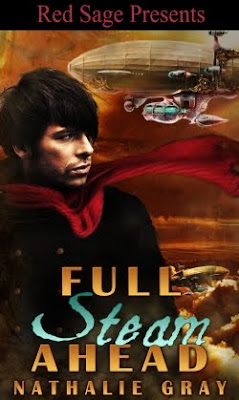 This cover is a super science fiction romance cover for a number of reasons. First, the airship is eye-catching and prominent. Sleek. It’s above the clouds so I’m anticipating the story will promise loads of adventure and airship battles. There’s not just one, either—two of them grace the cover. Those convey the science fictional aspects with aplomb. But what about the romance?

Answer: the color scheme. The cover spells out the romance with its deep reds, oranges, and hints of fiery yellow. The black clothing of the man in the foreground screams dark and dangerous hero. And it’s refreshing to see another cover with the hero’s face. (The more I reflect, the more I’m realizing that many science fiction romances feature the hero’s face. A possible mainstay for the subgenre, perhaps, to help distinguish it from paranormal romance?) I know it’s a stock photo, but I’m buying into his character already. I think it’s a safe bet that he’ll come close to matching the description of the hero in the story. I’m also wondering if the artist tinkered with the shadows around his face because his image looks hella sexy. Love the composition of the man and the airship at work here.

Contrasting nicely with the bold colors and block lettering is the sensuous curve of the word “steam.” That juxtaposition also conveys romance, as does the long red scarf. The billowing clouds contribute by lending the scene a bit of softness.

With steampunk romance currently making a mark for itself, well done, I say. As a science fiction romance fan, this is a cover I can believe in.

But wait a minute…since the hero of FULL STEAM AHEAD is featured on the cover, who is he, anyway?

In a recent comment at the Red Sage blog, Nathalie Gray offered this peek into her hero:

“…Captain Phineas "Finn" Hamilton is dark-haired, and even if I don't mention just how exultant his follicles are, they are there.

Finn is a privateer, one of the best, running dangerous routes along the borders with the enemy (steampunk equivalent of bikers crossed with Vikings...the ugly ones), so he wouldn't have time to mess with his hair. On his head (which is long), or on his chest.

Plus, he's a wounded hero, physically and mentally. He has an awful scar from his last run-in with the enemy (a battle that cost him much more than a nasty scar, too). So definitely no time for the wax jobs.”

Wow—airships and a hero with exultant chest hair follicles?! Color me sold.

FULL STEAM AHEAD by Nathalie Gray will be on sale by Red Sage Publishing on March 1, 2010.