Zoomorphism in Science Fiction—In or Out?

I’m at a point in my life as a reader where I’m starting to question the role of zoomorphism in science fiction, and by extension, science fiction romance. Despite the fact that I’m a fan of fare such as V and even THUNDERCATS once upon a time, I’m wondering if I’ve outgrown stories wherein alien characters possess an animal form.

To clarify, I don’t mean an alien animal form—I mean humanoid aliens that resemble Earth animals like reptiles, wolves, or pigs. To paraphrase Kevin Smith from his CLERKS screenplay, "JEDI was a bunch of Muppets." Talking pigs from the planet Pigsty in the Hoggerian Galaxy would be fine in a book if I were 10. But I'm not. I need some degree of verisimilitude to engage me.

I think my concern is when the alien is described solely in terms of his/her animalistic tendencies (e.g., an alien with tentacles that resembles is pretty much an Earth-based octopus). Assuming an author isn’t employing zoomorphism on an allegorical or metaphorical basis, there are times when its use strikes me as superficial worldbuilding. By now, science fiction has grown rather crowded with alien species that are some variation of lizards. I mean, honestly, are we that terrified of reptiles that we can’t stop projecting our fear onto imagined alien species? 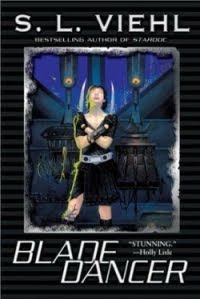 Science fiction has used a fair number of Earth species for aliens. Lizards are right up there with insect-based aliens/bug-eyed monsters. Ann Aguirre’s Sirantha Jax series features a prominent secondary character, Vel, whose appearance is reminiscent of your average Praying Mantis. S.L. Viehl’s BLADE DANCER includes characters that run the gamut of animalistic accessories: fangs, claws, fur, you name it. And when you delve into realms such as furry fandom, one discovers there are legions of consumers who enjoy zoomorphic characters.

Ultimately, it’s the story and/or writing that play a definitive role. Execution can make the difference between a pulpy, campy story and one much more sophisticated in tone. In other words, believability. When zoomorphism is in the house, it takes a high level of authorial skill for me to suspend my disbelief. Done well, the characters feel organic to the worldbuilding and/or they’re compelling enough that their boar-like appearance isn’t a deterrent. But even in the hands of a competent author, I find myself distracted by characters whose hooves, horns, and tails resemble the cast of Old McDonald’s farm.

In Adapting Earth Animals into Alien Lifeforms, S.L. Viehl suggests that authors “Give your reader that point of reference, and then use your artistic skills to build up to something they’ve never seen before – but won’t get lost trying to imagine.” Okay, can’t argue with the idea of constructing accessible aliens. But is it possible to create exotic aliens that don’t alienate readers? Perhaps without using Earth animals as reference?

Writing on the subject, How Alien Should Science Fiction Aliens Be? blogger Peggy notes, in paraphrasing author Daryl Gregory, “that when (or if) we meet another intelligent life form, it is unlikely to be bipedal, let alone humanoid. The problem is incorporating such an alien alien (for want of a better term) into an entertaining story.”

In response to Mr. Gregory’s post, author Kelly McCullough states, “…doesn’t this kind of ignore that the main point of aliens in an awful lot of science fiction isn’t to portray aliens at all, but rather to isolate and examine some specific parts of the human condition?”

Unfortunately, we don’t have the 411 on what true aliens look like. For all we know, some of them will look like lizards. Or prawns. Ultimately, what I question is the view that a hog based alien is as “Other” as it gets, especially without the worldbuilding details to back it up. (Of course, that doesn’t even touch the issue of aliens who share human DNA—sometimes as much as 100%! But that’s a post for another day…).

So now, given further reflection and perusal of various articles, I’ve completely reversed my position that I’ve outgrown zoomorphism. Maybe I haven’t. I do know that my standards have risen considerably for this particular trope. But as long as authors execute stories with considerable thought, I’m certainly game for romances involving any type of alien creatures—even if they are adapted from Earth animals.

What do you think about zoomorphism in science fiction/science fiction romance? What elements make such characters believable? Are there any zoomorphic traits you don’t want to read about anymore? Also, does it make a difference for you whether it appears in books or films?