Sometimes (or half of the time?) in romance, it’s all about the taming of the hero:

According to Berkley Books editor Cindy Hwang in We’re loving angels instead: Publishing craze goes celestial, "Angels appeal because they are larger than life, more beautiful, sexier and more sensual creations. Fallen angels have the same flaws that ordinary people have, which is attractive. If someone can tame such a powerful being and get them to fall in love with them, then that's very seductive." [Emphasis mine]

Upon reading that last sentence, I experienced a sinking feeling. Here’s why:

Is the lack of a “powerful being” holding SFR back from experiencing wider appeal? As a rule, and by its general nature, science fiction romance doesn’t have vampires, werewolves, angels, demons, or any other supernatural creature in need of a good taming by non-supernatural heroines. And “sensual” isn’t the first word that comes to mind regarding aliens. Especially if they have tentacles.

I’m assuming Ms. Hwang meant that a powerful being could refer to either a hero or a heroine. I certainly hope so, but I mostly get the feeling that she really prefers to consider stories in which the hero plays that juicy role.

And then it hit me—science fiction romance has exactly that type of powerful being who embodies that frequently sought after combination of vulnerability and danger in one sexy, sculpted package: 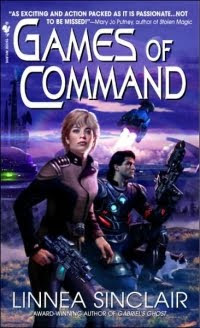 Part man, part machine, a cyborg’s physical capabilities easily supersede those of ordinary men. Tinker with their brains in just the right way and you can have heroes with enhanced intelligence as well. Plus, manipulation of their bodies doesn’t come easily (or cheaply), and that’s a surefire recipe for brooding, tortured heroes. Cyborgs put the “flaw” in “flawed.”

They are quintessentially larger than life characters by nature of their superhuman abilities. Witness the popularity of Linnea Sinclair’s Admiral Branden Kel-Paten from her novel GAMES OF COMMAND. Kel-Paten is an example of a romance hero that’s familiar, yet also fresh and inventive. And check out this exchange between the cyborg hero and the heroine in Melisse Aires’ CYBOT AWAKENED:

Kaistril pushed inside, just a little way. “You know you’ve uncaged the beast, don’t you?” he groaned.

Sabralia clutched him tight to her with legs and arms, and he slid deeper into her. “Maybe I’ll tame him,” she whispered….” (p. 70)

Does that not encapsulate the scenario Cindy Hwang described? I’m not alone, either. In Owoooo! Werewolf of…Vulcan?, Donna S. Frelick writes:

Love transforms what has the potential to be a destructive force into a positive one. Because she loves him, the creature, be he werewolf or vampire or whatever, can reveal his true self. She will accept him and help him “control” the beast. 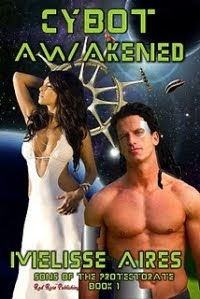 So maybe we are starting to pick up on something that our sisters in the paranormal world figured out a while ago: It’s kinda fun to bring the big bad wolf to heel. (In a mutually respectful, free and equal relationship, of course.) We just need to convince a few more readers that the beasts they love to read about also roam among the stars.

Perhaps the cyborg angle is something to consider when attempting to widen the appeal of SFR among paranormal romance lovers who gravitate toward stories of ordinary heroines taming powerful beings. Goodness knows we can use more cyborgs in the subgenre! There can be all sorts of variations of origin stories, and cyborg heroes (and heroines, of course!) easily lend themselves to the creation of leagues or brotherhoods or brigades. Or wounded loners.

You name it, cyborgs can deliver it.

Postus Scriptus: Although I had written this post prior to reading Donna S. Frelick’s piece, I have concluded that the fact that we came up with a similar idea unbeknownst to each other represents the awesome synchronicity of spirit that is science fiction romance.