Get Your Reading Groove On With Sharon Lee & Steve Miller’s “Expanding Universe Contest”! 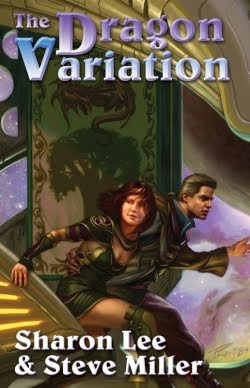 When I think of authors who should be required reading for science fiction romance fans, the names of Sharon Lee and Steve Miller come immediately to mind. This writing duo is the team behind the classic and ever-popular Liaden Universe®. This series of “adventurous romantic space opera” holds cross-over appeal for both romance and science fiction readers.

To celebrate the release of MOUSE AND DRAGON, Lee and Miller’s thirteenth Liaden novel, the authors are holding a cosmically cool contest. They're giving away 36 digital copies of THE DRAGON VARIATION omnibus, which includes CONFLICT OF HONORS, LOCAL CUSTOM, and SCOUT’S PROGRESS. This contest is open to anyone and everyone who has yet to sample the galactic gold (sorry, couldn’t resist) of a Liaden Universe® novel.

Not only that, but if you’re a blogger who wants to help spread the word about it, you’ll be entered for a chance to win a $36.00 gift card from Barnes and Noble! And if you’re a blogger new to the Liaden novels of Sharon Lee and Steve Miller, you can enter both tiers of the contest!

Here is an excerpt from the official announcement at Sharon Lee’s blog:

In celebration of the publication of Mouse and Dragon, the thirteenth novel set in their Liaden Universe®, authors Sharon Lee and Steve Miller are holding an Expanding Universe Contest! Yes! No less than thirty-six electronic copies of The Dragon Variation will be given away.

That's three complete novels under one cover. No prior knowledge of the Liaden Universe® required. Electronic! In Baen Books’ DRM-free, multiplatform style. This omnibus can be read on your Kindle, your phone, your iPad, your desktop, or other ereader.

How great is that? Environmentally friendly, too.

To enter the contest, visit the Expanding Universe Contest post at Sharon Lee’s blog and follow the instructions you see there (it’s easy). The contest ends at "midnight Eastern Daylight Time (4:00 a.m. GMT) Friday, July 16". Winners will be announced on Saturday, July 17, 2010.

Bloggers, I've created a post-ready announcement for your convenience. Simply cut and paste all of it from the window below: