Reflections On John B. Rosenman’s BEYOND THOSE DISTANT STARS 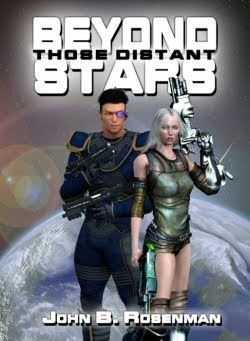 I recently read BEYOND THOSE DISTANT STARS by John B. Rosenman. Isn’t that a great title? He contacted me out of the blue, and it was a delight to learn about a possible science fiction romance. After finishing the story (the author was kind enough to supply me with a digital copy), I came to the conclusion that it’s romantic SF of the science fantasy variety, or more specifically, science fantasy with romantic entanglements. I thought it was a fun read for a few different reasons, but it also stymied my expectations as a science fiction romance reader. But before I get to all of that, here’s the set-up:

Alien invaders have all but destroyed humanity. Stella McMasters, a retired naval officer, yearns to get in the war but knows she’ll never get a chance. Then amazing things start to happen.

She saves a comrade’s life during a meltdown.

Physicians remove her radioactive flesh and turn her into a superhuman cyborg.

She’s given command of her first ship and falls in love with its charismatic pilot.

On their way to join the Empire’s last line of defense, Stella runs right into an enemy vessel. For the first time ever, the mysterious invaders invite humans aboard. Should Stella accept, or run? How can she avoid another crushing defeat?

The number one reason to read this book is Stella. One, she’s a cyborg. Two, she’s a starship captain. Three, she can kick ass. Four, she’s a sympathetic character. Five, Mr. Rosenman offered an interesting perspective on her cyborg experience. Some of the details he focused on regarding Stella’s transformation really made me think about the pros and cons of being a cyborg, and the physical and psychological impact that might have on a person. This is the first time I gave serious thought to the disconnect one might experience between one's human and cyborg components, and I attribute it to the author's unique take on such a character.

Another aspect that made this book fun was its pulp-adventure feel. By pulp, I don’t mean cheap/sensationalistic, but rather a storytelling style that harks back to the SF stories of yesteryear. The story contains lots of action, adventure, and larger than life characters. One example of the prose is the scene in which Stella and her crew are being briefed about the enemy they’re about to face:

Merely five years before, when the Empire of United Worlds was enjoying an unequalled period of conquest and expansion, the Scaleys had invaded this part of the galaxy. Where they’d come from, no one knew, nor whether they had any real culture, beliefs, or language as humans understood them. None of their ships had ever been captured, and the few Scaleys taken prisoner had somehow self-destructed or willed themselves to die, leaving only rapidly deteriorating corpses for analysis. (p.33)

I mention the pulp aspect because even while BEYOND THOSE DISTANT STARS holds strong appeal for female readers, the storytelling style might be an acquired taste. This is especially true if you’ve been on a steady diet of the current batch of science fiction romances. But it also meant that the science fictional elements were very accessible.

Now for the romance part. There is a romance in the story, but it doesn’t have a Happily Ever After. And there are a few scenes that might merit this book a wallbanger for many romance readers. But if you approach this as a science fiction story with romantic elements, then your expectations should come through the experience intact.

Here’s the most interesting part, and the reason the book made my expectations go haywire: BEYOND THOSE DISTANT STARS had so many moments of introspection on Stella’s part regarding her love life that it felt like an SFR even though I can’t recommend it as such (if you took out the romance, the story would still work). But because there are so few heroine cyborgs in the subgenre, I thought you might want to know about this book.

Cool trivia about BEYOND THOSE DISTANT STARS: The book was first published with NovelBooks, Inc., and was originally edited by some gal named Jody Wallace.

The last item I should mention is that it ends on a bit of a cliffhanger. After I inquired about future books, Mr. Rosenman assured me that

“…the series will go on. Someone wants Stella dead because of her great political power. Star Warrior is part detective/mystery, part space opera. Stella is the greatest star warrior in history, but she is driven into exile where she must return to her courageous role in Beyond Those Distant Stars to uncover the villain and reclaim her power as Regent-Protector. And I will bring back a few old friends such as the All-Mother and even General Gage briefly…”

Ultimately, BEYOND THOSE DISTANT STARS is for readers who want a splash of romance with their SF (you can buy it at Mundania Press). But boy girl, does the cover ever scream science fiction romance…!