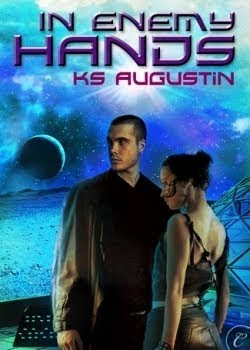 Did you know...Carina Press categorizes KS Augustin’s IN ENEMY HANDS as “Romance, Science Fiction?” However, that’s not the whole…story. In a guest blog post at Leah Braemel’s joint, the author notes that “IN ENEMY HANDS is classified as a hard s-f romance and there's quite a bit of science in there, but it's just another element of the story as a whole. I figure if you can cope with the romance, and the politicking, you can cope with anything!”

I recently had the pleasure of reading IN ENEMY HANDS, and as a result I feel that the story as has a good balance of hard science fiction, romance, and politics. It’s space opera, but feeds your need for intellectual stimulation rather than pulpy action-adventure.

Before I continue, here's the story blurb:

The Republic had taken everything from Moon—her research partner, her privacy, her illusions. They thought they had her under control. They were wrong.

Srin Flerovs, Moon’s new research partner, is a chemically enhanced maths genius whose memory is erased every two days. While he and Moon work on a method of bringing dead stars back to life, attraction between them flares, together with the realisation that they are nothing more than pawns in a much larger game.

When Moon discovers the lethal applications her research can be put to, she knows she must rescue Srin and escape the clutches of the Republic. But there are too many walls around them, too many eyes watching. They want to run, but they’re trapped on a military spaceship in the depths of space, and time is running out….

Overall, I thought the author did an effective job of blending hard SF, erotica, and romance. The science was plausible and accessible and I enjoyed learning new shtuff, as in this scene when Moon and Srin are starting a work session:

”Srin,” she said, laughter in her tone. “You’re just in time. I want to run some basic computations past you.” She knew she was rushing him, speaking in an enthused staccato, but couldn’t help herself. She was full of energy, and didn’t care if the universe knew it. “I have the feeling I need to modify LeCoeur’s Constant regarding the behaviour of gravity waves in compressed environments. Those are compressed stellar-based fusion environments, of course. We have to start formulating the influence of electromagnetism, radiation, and temperature, so we have a lot of work to start today.” (pg. 59)


I don’t know what any of that is, but I know I like it! Given that Moon is a scientist who specializes in "stellar mechanics," this is the type of detail that makes me want to glom books about the life and death of stars.

One aspect that I was glad to encounter was that the romance didn’t feel rushed, and neither did the first love scene. I think it had to do with the fact that I had a chance to meet and get to know both the heroine (who is a scientist, squee!) and the world before the hero made an appearance.

I felt that the heat level fit with the story, and it helped that Moon was presented as a scientist who also happened to be a sensual woman (although it had been a while since her last date). Just because she had to be clinical and calculated in the lab didn’t mean she had to be that way in her personal life, and the fact that Moon was in touch with her sexuality created a bridge to the erotic nature of the love scenes. If the love scenes had been really raunchy (as I define the term; your mileage may vary), then there would have been a serious disconnect with the other story elements. Fortunately, that’s not the case.

Surprisingly, there were two love scenes that didn’t work as well for me as I would have liked. The reason had nothing to do with the scenes in and of themselves, but more with the fact that KS Augustin did such an entertaining job with the skiffy elements and politics that I wouldn’t have missed the love scenes if some other element had been explored instead. One scene struck me as an erotic “extra.” As for the other one, I didn’t find it plausible that it would happen when it did, but keep in mind this is my personal preference and other readers may feel differently (especially if you are really into multiple love scenes).

I think it’s simply grand that authors have opportunities to write and publish stories that cater to the eclectic needs of science fiction romance readers. Are stories like these a risk? Certainly, because as the author pointed out in my interview with her, a few literary agents felt that the story had “too little sf” to be sold as sf, and “too little romance” to be sold as a romance." This despite the fact that I, the reader--the actual customer--wants exactly that type of hybrid story. We get it, and it's up to SFR fans to educate others if we are actually going to have our peanut butter cups and eat them, too.

The risks are many, but they are the types of risks authors, publishers, and readers need to take in order for science fiction romance to evolve to its fullest potential.