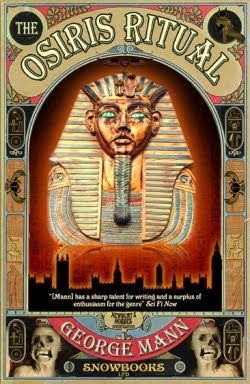 Shortly after I blogged about George Mann’s THE AFFINITY BRIDGE (A Newbury & Hobbes Investigation), a Tor/Forge publicist contacted me and asked if I’d be interested in a galley of the next book in the series, THE OSIRIS RITUAL. My response? “Where do I sign?!!” Upon receiving the book, I quickly devoured it. I was reading it for the steampunk, but I was also intensely curious about whether the author would continue the thread of romance he’d hinted at in the first book. I wasn’t disappointed on either count.

However, my purpose here isn’t to review THE OSIRIS RITUAL. For that, you can refer to John DeNardo’s review at SF Signal. Here’s an excerpt:

The three-pronged plot here involves mysterious murders surrounding an Egyptian mummy, a rogue agent who has been mechanically augmented, and a series of women gone missing from a magician's stage act. Each of these story lines hints at the desired mixture of flavors of The Osiris Ritual: the mummy providing the supernatural ingredient, the augmented agent representing steampunk, and the disappearances lending the air of mystery.

Rather, I’d like to make a few non-spoiler comments about the developing attraction I detected between the hero and heroine (your mileage may vary). A romance aspect is present throughout THE OSIRIS RITUAL, but again, as in THE AFFINITY BRIDGE, it’s understated. Newbury is a brilliant investigator, but also tortured man. Hobbes is presented as a progressive, capable woman who may or may not be able to tame him. That’s a recipe for a romance if I ever saw one.

My expectations were met as far as their personal relationship development. Newbury is attracted to Hobbes because she is smart and unflinching in the face of danger. Hobbes finds Newbury attractive because of his investigative skills as well as his expertise in the occult. Of course, he’s also quite the dashing fellow. Still, because of the barely-there romantic subplot, while reading the story and after finishing it, I found myself engaging in quite a few daydreams about how their romance might unfold. All it took was for the author to have Newbury make an observation about Hobbes’ physical appearance, and in my mind I fast-forwarded to the couple Doing It.

But it wasn’t just about physical attraction. Veronica Hobbes has a secret, which was revealed in the first book and has increasing prominence in THE OSIRIS RITUAL. The secret has Very Serious Implications for her relationship with Newbury. It’s a trust issue—one that factors into both their professional and personal relationships and threatens to throw a monkey wrench into the budding romance. The development was enough to make me sigh with pleasure because it foreshadows what could be very intense conflict. How totally righteous it would be if Mr. Mann decided to expand the romance in future books, or at least write a side story wholly devoted to it.

So that’s my take on the romantic angle. If you want a sense of the story’s overall tone, here’s what a review at SF Crowsnest had to say about THE OSIRIS RITUAL:

Equal parts light and dark, the book plays well with the light-hearted dialogue reminiscent of old literary serials whilst the darker aspects are harrowing and nasty. Nasty enough to cause a jolt and to make you think twice about whose safe but not enough to terrify you out of reading it for fear of harm to the characters.

Maurice Newbury, who will inevitably and unfairly be compared to Holmes, is a fantastic lead who meshes a keen intellect together with an addictive personality. His insecurities are human enough and the pressure he puts himself under makes him all the more believable. The writing style is clear and concise, not too over-detailed, not too scarce. It's a book that prides itself on its style and its light adventurous tone, sure it has dark undercurrents but a good novel never lacks that. It's a fantastical homage to a bygone era that changed the world, in both reality and fiction.

And check this out: George Mann has inked a deal for a Newbury & Hobbes graphic novel! Earlier this summer, he posted a sample image from THE OSIRIS RITUAL at his site. A film or television version of the series can’t be far off, can it? 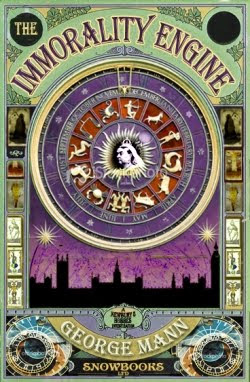 In the meantime, readers can look forward to the next book in the series, THE IMMORALITY ENGINE. Fingers crossed that the romance subplot thickens….