Sapphire and Steel: A Creepy Kind of Love

Yo, Passengers. Just got back from a mission in which terrible things happened to bad people and I made an awful lot of money to spend on books and DVDs and new outfits. I was exhausted when I got back to home base and it was time to enjoy some creature comforts. Yep, I updated my Netflix list!

There’s nothing that I love more than a good old-fashioned rupture in the space-time continuum (well, except for maybe laser guns and dark chocolate and polish vodka and loads of other things, but I really, really do love space-time continuum ruptures an awful lot.) From whence came this strange and awful love? Well, Brits of a certain age may recognize the names of Sapphire and Steel, the stars of an old TV sci-fi show that aired in the U.K. from 1979 – 1982.

Take a look at the trailer:

Sapphire and Steel were a couple of interdimensional operatives who would be called on to go fix the ruptures in the corridor of Time itself. Watching it as a kid was, well...scary. These shows were seriously creepy. And I never understood what the hell was going on. Watching them many years later: well, they were still really creepy and I STILL couldn’t understand what was going on. Heavy on atmosphere, low on explanation, this had to be one of the strangest programs ever to air in the UK (and that’s saying something.)

Despite having to watch the show from a safe place behind the couch, the two stars were compulsively watchable.

Joanna Lumley (Sapphire) had just done a stint on The New Avengers playing Purdey - one of the original kick ass heroines. Nowadays she’s better known as Patsy from Absolutely Fabulous. 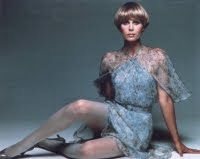 David McCallum (Steel) had once played Ilya Kuryakin, the mysterious Russian sidekick to The Man from U.N.C.L.E and he was also my first crush. He’s still going, too, playing Ducky Mallard on CSIS. 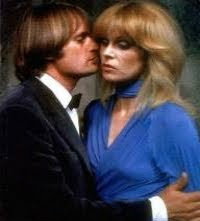 Sci-fi romance? In a weird Sapphire and Steel kind of way, I guess. They would stare at each other a lot, and they would stand very, very close gazing into each other’s eyes, rarely touching, but always looking like they wanted to. I, of course, was far too young to know anything about sexual tension. I just had the weird feeling I was looking at something I shouldn’t.

I can’t say it has stood the test of time too well. It was always too strange for television, but there are certain images from this show burned into my brain - a man without a face, a soldier who doesn’t know he’s dead, children orphaned by Time, and that enigmatic ending to the series, with Sapphire and Steele cast adrift in space forever as a punishment for who knows what.

If you’re interested, here’s a wee taste of the creepiness:

Did it ever show anywhere apart from the U.K? Does anyone know what the heck it was about? 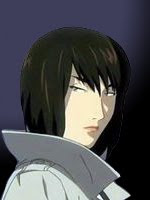