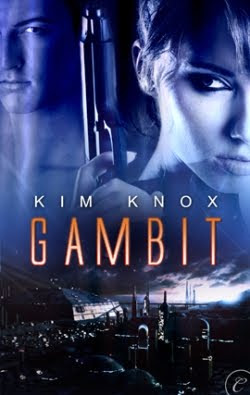 I must say, I got a thrill reading GAMBIT’S tags at Carina’s store, which are “Futuristic, Romance, Space Opera.” No “paranormal romance” anywhere in that equation, no siree! Sigh…I lurv me a good metadata. Readers know exactly what they’re getting, and with Kim Knox, they can expect high octane action, adventure, and hot romance.

The author graciously agreed to an interview so we could learn more about her body of work as well as her latest release. You’ll learn just how much she’s a customer herself of science fiction romance. But first, here’s the blurb for GAMBIT:

Daned Traern is a first-caste Ladaian bound by tradition and DNA to protect his race. He’s willing to align himself with the hot space captain if she’ll transport him home in time to ensure the right candidate is crowned—and thus prevent a bloody war.

Disguised as Chae’s sex toy, Daned is erotically bound to her through living gold, alien tech designed to increase pleasure. When he frees himself, their passion only increases…but succumbing to temptation will bind them together—permanently.

Gotta love those extraordinary heroines! Now for the main event, my interview with Kim Knox:

The Galaxy Express: Why do you write science fiction romance?

Kim Knox: I’ve always read science fiction, but I began to crave more, a greater depth to the characters, and I wanted an equal weight of romance and sex with my guns and spaceships. It was strange for me to allow myself –and my characters—to begin to care about each other as well as save the world and/or galaxy. But once I started, I couldn’t stop. Now I get to play with how all kinds of strange and wonderful scientific ideas impact on people’s relationships and generally give them hell. It’s fun  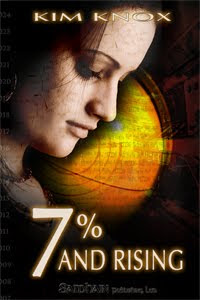 TGE: What was the path to publication like for your first SFR?

KK: I was first published in contemporaries under another name. The lack of external conflict, of murder and mayhem, in the contemporaries I wrote pushed me back to my first love of science fiction and fantasy. As I said, I was nervous about adding romantic relationships and especially sex to SF/F. It was something that I’d never found in the books I’d read. Not to the degree I wanted, anyway.

It started slow with Nimue’s Price, a science fantasy set in fifth century Britain. I allowed my characters to have a strong attraction as well as battle their enemies. Their ending is more HFN – happy for now – and I wasn’t sure about listing it under a romance tag, so I really consider my first real SFR to be 7% and Rising.

That story started its life as an exercise for my MA course. Again I’d hinted at a possible relationship between the characters, but had felt uncomfortable pushing it further at the time. Writing Nimue’s Price gave me the confidence to play out Cahn and Roen’s story as I’d always wanted to. Plus I got to seriously mess with time travel and fracturing realities, which is always an added plus for me. Samhain Publishing contracted 7% and Rising and gave me a fantastic cover. They also let me keep my title, which I’m also very happy about.

TGE: How many books have you published to date? What are a few of the common elements that readers can expect from your stories?

KK: I have 24 published to date, though three of those are contemporaries under my other name. There’s also a mix of fantasy and paranormal in with majority of SFR. I think what links them all is a hint of darkness, a fast pace and unexpected twists and turns. Also yummy heroes. But I may be biased on the last one. 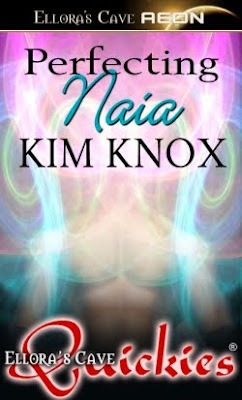 TGE: When you blogged about PERFECTING NAIA, you stated that “I wanted to play with my love of mythology – I’ve been reading a lot of Greek and Roman reference books lately – but making it SF too.” What are a few of your favorite mythology stories that have made it into your science fiction romance works?

KK: Some of the myths work into my not quite SFR stories. As in Emergence, a future set story that has mythological creatures, the mythoi, living with humans for two hundred years. Or Nimue’s Price, that has Merlin and Nimue in fifth century Britain having to deal with weapons of mass destruction.

When I blogged about Perfecting Naia, I was in the middle of splurge reading for another book. I rediscovered my fondness for the minotaur and his labyrinth, though I have to admit to seeing things from the minotaur’s point of view rather than Theseus’. I think that’s where the idea for Perfecting Naia originally came from…and it got increasingly more interesting from there.

Most other stories don’t have so obvious a start. I realised after I’d written it, that Flesh and Shadows, played with the idea of the Garden of Eden. It short of slapped me in the face and I didn’t know how I’d missed it with the snakes and the fruit and a heroine called Niamh… Sometimes I can’t see where an influence has come from until I’ve written the book. The way my brain works annoys me sometimes…

TGE: Please tell us about the inspiration for GAMBIT, your first release with Carina Press.

KK: My two boys love Star Wars. They can watch it ad nauseum. I can too, but I like to blame them! I was sitting through another airing of Return of the Jedi, with my brain half awake, when a thought hit me. What if Han Solo was Jabba the Hut’s pet wrapped in gold rather than Leia? I liked that thought a lot…though not necessarily Jabba as my heroine. So I kept the Han in his strips of now living, pleasure-giving gold and gave a woman the leash.

It changed and grew from there, but the idea of a hero, unashamed in little scraps of gold was the image that stayed with me.

TGE: You’ve created multiple worlds populated by a variety of characters. If you could have the career or job of any of your SFR characters, which one would you choose?

KK: Probably the safest would be Alena’s position in Unity. She’s an empress of an orbiting and shielded city. I think most of my heroines are in too dangerous a job for me to want to follow them. But I do envy them some of their heroes. Especially Jonathon Raegh from Warflesh… *cough *

KK: I’m a fan of Linnea Sinclair, as I’ve said before, she was the one who showed me there was such a thing as science fiction romance. I’m also a complete fangirl of Nathalie Gray. I discovered her through one of her free reads on Ellora’s Cave, then inhaled her backlist. My current reading is a mix of Steampunk and SF and I’ve found an author I love. I’ve just raced through Gail Carriger’s Parasol Protectorate trilogy…and now have to wait a year for the next book.

My TV favourites have to include Stargate -- in all its spin offs, Babylon 5 and especially Doctor Who. The programme probably started my obsession with time travel. One of my earliest memories is of being terrified by the spiders of Metebelis III. My imagination made up for the ropey special effects! And of course, I love the new series. The Master –especially when he’s blond – has a special place in my heart ;-) 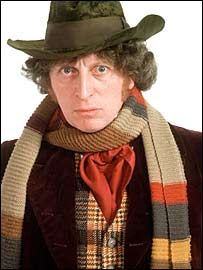 TGE: Do you have any advice for SFR authors looking to write for digital publishers?

KK: I don’t think my advice would differ between print or digital. It always has to be, write the best book you can. The bonus of digital publishers is that you can write a story of a much shorter length. That’s perfect for me, as I’m still learning to build my stamina to write more books over fifty thousand words.

And thank you for asking me for an interview, Heather.

Ms. Knox, thank you for your time, and for your art.

Kim Knox has been busy since GAMBIT’S release. She recently blogged at Carina Press:

Is Your Pleasure My Pleasure ;? A Gambit excerpt

In Please Captain, not in front of the Klingons ;, she blogs about her love of science fiction and SFR:

I love a fast paced SF story, be it a book, on television or in a film. Space guns and star ships and an awful lot of running up and down the corridors of orbiting space platforms… I think that may be Doctor Who again. What can I say? I watched it from a very young age.

To sample her work, check out her Free Reads page. And to cap it all off, here’s a 2009 interview the author did at Embrace The Shadows.

For further updates about Kim Knox and her books, visit her blog, and you can also follow her on Twitter (KimKnox).