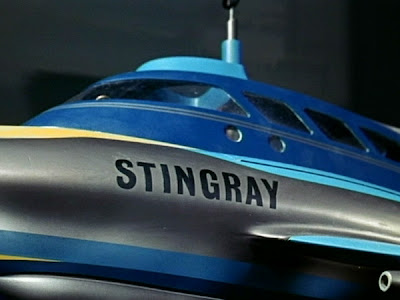 "Stand by for action! We are about to launch Stingray! Anything can happen in the next half hour!"

The above announcement kicked off each episode of STINGRAY, one of Gerry and Sylvia Anderson’s superlative Supermarionation masterpieces. This show has been on my mind ever since…well, since as long as I’ve been a fan, but especially so after reading the Parallel Universe guest post by Dirty Sexy Books’ Rebecca Baumann in which she wrote:

Space exploration captures our collective imagination, but I think we’re ignoring an equally cool frontier – the oceans. Movies like 20,000 Leagues Under the Sea and The Abyss do a fabulous job of showcasing how the ocean is every bit as strange, wondrous, and dangerous as space. I enjoy stories that touch on this idea that our future may not be up there, but down below.

Let me tell you—when I read that passage, everything I love about STINGRAY rose up from my memory and hit me with the force of a tidal wave. On its surface, STINGRAY is a children’s show about a pimped up submarine embarking on fantastic undersea adventures. But if you peel back the layers, the show reveals the nascent stages of a futuristic, ocean-based science fiction romance.

Stingray, a highly sophisticated combat submarine built for speed and manoeuvrability, is the flagship of the World Aquanaut Security Patrol (WASP), a 21st Century security organisation based at Marineville in the year 2065. She is capable of speeds of up to 600 knots and advanced pressure compensators allow her to submerge to depths of over 36,000 feet, which permits cruising to the bottom of any part of any ocean in the world. 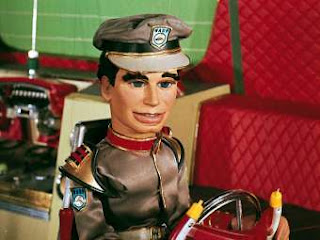 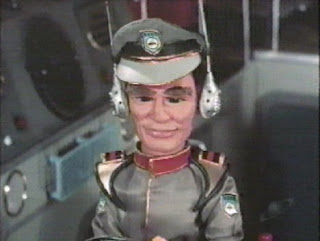 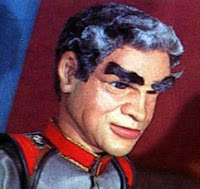 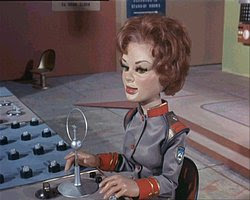 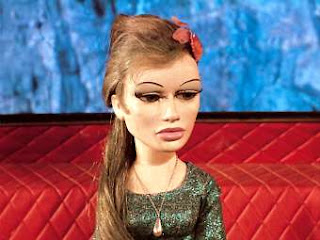 King Titan: Ruler of the Aquaphibians, a submarine warrior race that lives in the underwater city of Titanica. 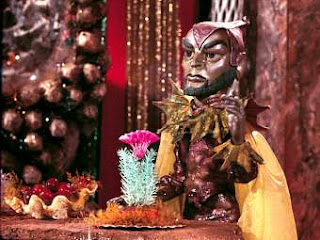 So how does all of that add up to science fiction romance? STINGRAY is about the adventures of Troy Tempest and his colleagues as they patrol the ocean depths in a futuristic submarine capable of like, totally amazing feats. They encounter a variety of undersea races, but their main nemesis is King Titan, an all around bad egg whose goal is to destroy Marineville and Stingray. Believe me, those Aquaphibians are downright creepy. You don't want them bugging their eyes at you.

And here’s the kicker: STINGRAY features a love triangle between Troy Tempest, Atlanta, and Marina. Marina has the hots for Troy, but after Marina rescues him from the clutches of King Titan, Troy finds himself smitten by the enigmatic beauty. Marina is mute, so Troy has no way of knowing how she truly feels about him. In truth, Troy’s kind of a player—an ass, really—because he leads both women on.

Oh, and I could go on about how surprised I was to discover not only a romantic thread in this series, but a little bit of sexual tension as well. Not overtly, mind you, but in the way the writers clearly wrote some of the scenes above the heads of children. This is most evident during the show’s “closing credits, where Troy sings "Aqua Marina" (a song reflecting his romantic feelings for Marina) whilst Atlanta gazes wistfully at Troy's photograph.”

Allow me to demonstrate:

Did you catch the line, “Marina/What are these strange enchantments that start whenever you’re near?” Whoa...sounds like a euphemism for Troy's arousal to me.

Don’t you just want to rush out and glom all 39 episodes of STINGRAY right this very second? I know I’m ready to relive the joys (and retro laughs) this series has to offer. But before you go, keep in mind that it doesn’t have to end with STINGRAY. I would love, love, LOVE to read or watch a science fiction romance with an ocean-based setting. Near-future, far future, submarines, underwater cities, badass steampunk kraken, you name it. Science fiction romance has loads of potential to branch off in that kind of direction. Perhaps I should clarify further: STINGRAY is one experience I’m looking to have again. And again.

In short, I’m standing by for the action.

Fireball XL5
Firefighters In Space? Bring It On!
All Your Beta Are Belong To Us