A Special Announcement for Kimber An's YA Novel SUGAR RUSH 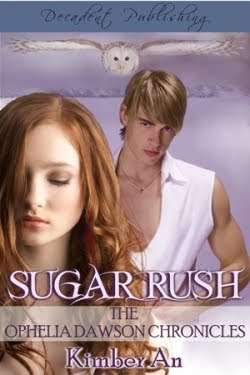 Longtime science fiction romance fan and advocate Kimber An is, after seemingly ten gazillion years of writing, is now a published author! Her debut is SUGAR RUSH (Decadent Publishing), a Young Adult novel. Congratulations, Kimber An!

To celebrate the release of her book, Kimber An is hosting a Cyber-Launch Party at Enduring Romance on Saturday, October 22, 2010 (that’s tomorrow!):

It will run from 6 a.m. until 6 p.m. Alaska Time. Feel free to pop in and out and you will be entered to win a free eBook of SUGAR RUSH and an Alaskan moose plush toy and maybe some other goodies.

In the meantime, I asked her to share a few details with us about her debut book:

The Galaxy Express: In three sentences, tell us three essential things about your debut YA novel SUGAR RUSH.

Kimber An: Ophelia, the heroine, is sixteen years old and has a reserved personality. She does not start the story kicking butt. Falling in love brings her subtle courage into sharp focus, however, enabling her to eventually win the day.

TGE: What kind of science fiction romance/paranormal elements can readers expect from the story?

TGE: Where can readers go to learn more about the book?

Sugar Rush is the only story there right now, but there are three more YA authors coming up and they will be co-blogging at Enduring Romance starting next Saturday. They are Rebecca Royce, Leslie Soule, and Vanessa Barger.

KA: I would like to thank you, Heather, and all the blog buddies here at the Galaxy Express for encouraging and inspiring me to achieve publication. I believe it was here that I first learned about Decadent Publishing, in fact! Sugar Rush is the first in the Ophelia Dawson Chronicles and I will work diligently to get the next story out soon.

Read an excerpt from SUGAR RUSH. And here’s the blurb:

Running and screaming will have to wait. A blood-sucking dead guy may be a vampire to you, but he’s an alien/human hybrid to Ophelia and she really must examine his olfactory nerve under a microscope first.

Ophelia longs to be free, free of Diabetes, free of her ex-boyfriend, free to live. Something transformed Martin and made her his drug. If he has his way, she’ll never achieve the freedom to learn his true nature and origin.

Adrian’s the new guy in school. He faked his identity to get close to Ophelia, knowing the monsters who took his Diabetic sister would try to take her, too. Then, he’d have them. But, he knew better than to get too close.

Many happy sales, Kimber An!