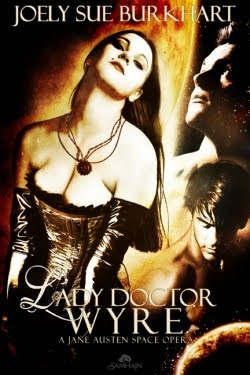 Thanks to the author, we at the Galaxy Express have an exclusive first look at the cover!

Here’s what the cover is telling me:

First, note the abundant cosmic backdrop. The cover for LADY DOCTOR WYRE shows we can haz skiffy elementz AND a romantic feel in one package. Nanotechnology is kewl, but I have doubts we could represent such a miniscule phenomenon in a decent way on a digital cover. :P And verily, those bodacious ta-tas are a sight to behold! Truthfully, I’d rather have that kind of imagery than man-titty. Given that the artist had only stock photos to work with, at least there’s a strong hint of the futuristic Regency setting.

Other thoughts: The two men on the cover seem to promise a bit of a love triangle in the story. The cover also has Samhain’s signature darker tone. That aspect could hinder the overall image standing out from the pack, but the publisher delivered a cover that is unabashedly SFR, so I’m not complaining.

As for the story, courtesy of the author I can also present the (unofficial) blurb:

In a universe where Jane Austen reigns supreme, Charlotte, Duchess of Wyre, earned the name Lady Doctor Wyre as the Queen’s Physician. Fearing the atrocities the Britannian Empire might commit with her research, she plotted her “death” and subsequent escape with the help of the galaxy’s most infamous assassin, Lord Regret.

Unfortunately, the colony where she’s hiding has declared independence, and the humble sheriff she’s been courting is actually an undercover marshal trying to win her confidence—and her technology—for the new government. Wearied of hiding, running, and worse, living without tea and silks, Lady Wyre decides the seven-year solstice eclipse is the perfect time for her to send a warning to Britannia’s Queen: cease hunting Lady Doctor Wyre…or lose the technological power Britannia holds so dear.

Starting in March, Joely Sue Burkhart will start featuring a free, serialized prequel to the series. How’s that for an SFR bargain?

LADY DOCTOR WYRE sounds like an intriguing story, and I’d like to thank Joely Sue Burkhart and Samhain for this wonderful exclusive.

So, my lucky passengers, what are your thoughts on this cover? Do you think it's trying to sell anything other than what I mentioned? Do you think the historical elements in the cover will intrigue fans of historical romance?