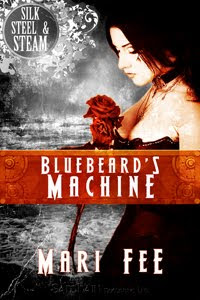 Love, science, death. She is all three.

Determined to discover what new experiment is stealing her husband’s attentions, Annette Parker ventures into forbidden territory—his study—only to discover a secret he would kill to keep. She is his fifth attempt to clone the original Annette and, according to his journal, he’s planning a sixth…after he dissects her dead body.

Unsure of who or what she is, she assumes a new identity and flees to the Orkney Islands and her last hope. The man she once rejected.

Isaac Ward’s first instinct is to get this mysterious “Miss Ada” out of his undersea laboratory—and out of his life—before he repeats the mistakes that drove him there in the first place. Her wild stories and stubborn insistence that they’re true wear his patience thin, but it doesn’t matter. She is as irresistible as the tide.

Then the truth appears right outside the portholes of his lab, stripping away her dubious disguise. Exposing a secret that could kill them both…unless Isaac abandons the science he knows for a second chance with the woman who broke his heart. Love lifted her heart to the skies. The rest of her needed a little more help.

When Flavia Winters enters the aerial carriage that will convey her across churning waters to the magnificent, isolated castle of Dr. Harland Gennaro, it’s not a polite social call. Nor does she hope to re-ignite their former passion. Oh, no. She’s convinced the renowned scientist stole something of value from her lab, and she plans to get it back by whatever means necessary.

Once Harland blinks away the temporary blindness caused by Flavia’s clever magnesium beads, he finds himself tied to a chair as she insists he return a vital ingredient for some impossibility called “Icarus”. Then she demonstrates with the last of her compound, and all he can think about is convincing her he’s not the guilty party—and getting into the lab with her to recreate her gravity-defying wonder.

Side by side, they burn the midnight oil making new discoveries, and re-learning old ones about each other. As an ocean storm rises with their desire, though, skullduggery is afoot. A thief watches and waits for the moment they make a discovery that could be their last.

Warning: Reading this book may stimulate an interest in the principles of physics, aerodynamics and the science of sexual arousal. The author is not responsible for any injury incurred while investigating all three topics simultaneously. 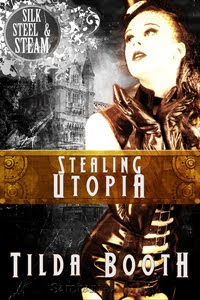 The plan: Kidnap H.G. Wells. Definitely not part of the plan: Falling in love.

The year is 1897, the place, a Britain that could have been, but never was. H. George Wells is helping lead Britain into a new Golden Age, driven by technological advances and discoveries of the human brain. Then one night a beautiful woman abducts him at gunpoint, and she seems to despise everything he’s worked for. Despite his outrage, he can’t help but be intrigued by this adventuress and her passion for her cause.

Jane Robbins, agent provocateur, has reason to fear her country’s march towards a new world order. Using her wits and her arsenal of spy gadgets to infiltrate Wells’ house, she delivers him to her employer, who plans to use him as leverage to halt the coming Utopia. But when Wells’ life is threatened, she must choose between saving him or sacrificing him to the cause.

Scientist and spy, they are irresistibly drawn to each other even as the future pushes them apart.

Warning: This book contains gadgets, guns, death rays, dirigibles, sexy scientists and a smoking hot Victorian spy who’s as much steam as she is punk. Don’t blame us if it makes you want to slip a pistol into your garter and abduct the man of your dreams.