Author Cindy Spencer Pape recently informed me about her two forthcoming 2011 steampunk fantasy romances, one of which will be a free download! Right now I’m prioritizing steampunk romances that fall closer to the SF side, but I do so enjoy steampunk-supernatural mixes (e.g., THE OSIRIS RITUAL by George Mann; THE NARROWS by Alexander Irvine), and have put her books on my TBR list. I also figured some of you might be interested in learning about these titles, so here are the shiny details: 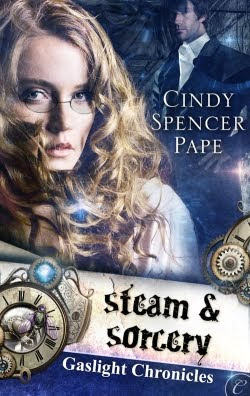 Sir Merrick Hadrian hunts monsters, both human and supernatural. A Knight of the Order of the Round Table, his use of magick and the technologies of steam power have made him both respected and feared. But his considerable skills are useless in the face of his greatest challenge, guardianship of five unusual children. At a loss, Merrick enlists the aid of a governess.

Miss Caroline Bristol is reluctant to work for a bachelor but she needs a position, and these former street children touch her heart. While she tends to break any mechanical device she touches, it never occurs to her that she might be something more than human. All she knows is that Merrick is the most dangerously attractive man she’s ever met—and out of reach for a mere governess.

When conspiracy threatens to blur the distinction between humans and monsters, Caroline and Merrick must join forces, and the fate of humanity hinges upon their combined skills of steam and sorcery…

April: PHOTOGRAPHS & PHANTOMS: a Gaslight Chronicles novella (this will be a free download) 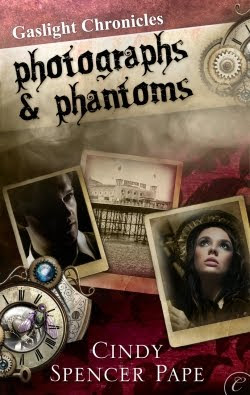 Both of Cindy Spencer Pape’s titles will be released by Carina Press. Learn more about the author by visiting her blog. You can also follow her on Twitter (CindySPape).