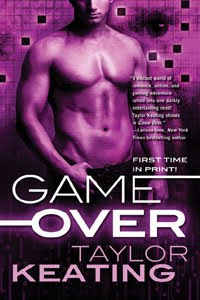 Recently, Tor/Forge publicist Cassandra Ammerman was kind enough to send me a copy of Taylor Keating’s paranormal romance, GAME OVER. It was a nice surprise since I hadn’t yet heard of the book. Now that I’ve read it (and FYI it’s officially labeled as a “paranormal romance”), I can say that the story contains both paranormal and science fiction romance elements, though neither genre seemed particularly dominant. They just seem to...co-exist. Not sure I’ve quite come across this kind of split before, and I’m trying to process my reaction to it.

To that end, let me take you back to when I first opened the package:

I read the press release, which starts with the tag line: “With the programming almost complete, the game has just begun…” Not bad, eh?

I look at the book. The title tells me it involves video games of some kind. Color me a fan of TRON, so whee! I was also intrigued by the first sentence of the story blurb:

Video game designer River Weston is ready to sell her soul to smooth out the glitches in her latest project.

Having read a couple of cyberpunk romances last year and wanting more, I was thinking, "Hey, maybe GAME OVER might have a little cyberpunk action." Then the first part of the second line drew me in even more:

When she unwittingly taps into a parallel dimension via cutting-edge technology,

Color me a fan of cutting-edge technology, too, so boo-yah! And I can totally dig parallel/alternate dimensions. Okay, but did you catch the phrase above that should have clued me in big time to a certain aspect of the story? If not, maybe this will clear it up:

a Dark Lord is quick to take her up on her inadvertent offer. Trapped in the world she thought she’d created for her game, River finds herself in a very real alternate dimension that she must escape from before her soul can be used to unleash evil–upon this dimension and many others.

“Sell her soul” is a huge tip off to the paranormal nature of this story. The weird thing is, GAME OVER also contains significant science fiction romance elements. There’s the immersive virtual reality game that River has created, a post-apocalyptic setting, whispers of a government conspiracy a la THE X-FILES, and even biogenetically engineered life forms that are referred to by some characters as “monsters.” You could also think of them in terms of mutant superhumans.

The thing is, the life forms are humanoids with—you guessed it—wolf-like characteristics. That detail in particular got me to thinking about how this story seemed like a 50-50 paranormal and science fiction romance hybrid. And how reading it became something of an experience in disassociation.

I suppose with the humanoid wolf “monsters” there’s some THE ISLAND OF DOCTOR MOREAU flavor, but the element still gave me pause: If scientists are able to genetically engineer superhumans in a futuristic setting, would wolf characteristics be the number one template of choice? Why not cyborgs, or humans with enhanced strength and/or senses? While reading the story, the SFR side of me wished for more skiffy elements along those lines—or at least ones that didn’t seem so blatantly drawn from paranormal romance.

A prisoner of the Dark Lord, Hawk is a man adrift—literally. His body safe at home under the watchful care of the Guardians’ scientists, his astral-traveling spirit has been enslaved by his people’s worst enemy, the Dark Lord.

To avoid spoilers, I’ll simply say that the story also involves “Fae” characters and magic. Yet most of the story takes place in River’s game (a fact which might hold appeal for you gamers out there). But then there’s the “Dark Lord,” who to my mind was basically a thinly veiled Satan. But then there are the Guardians, an alien-ish race that uses various forms of advanced technology.

The approach taken to the setting made me wonder if there was a deliberate attempt by the author (actually the writing team of Catherine Verge and Paula M. Fox) to create a certain type of hybrid tale. Mix humanoid wolves and Fae and magic off of the freshly baked paranormal romance subgenre and merge it with cyberpunk post-apocalyptic action-adventure and voila! Instant cross-over story. But if so, a cross-over to where?

Even if you haven’t read this book, what are your thoughts about the story blurb? Could a paranormal romance with SF elements draw in readers new to science fiction romance?