Can This Technically Flawed Cover Be Saved?

Given my tastes in niche entertainment, I’ve learned to overlook things like low budget special effects, grainy movie trailers, and poorly crafted book covers. Because if I hadn’t, I’d have missed some pretty awesome stories. However, sometimes I’m not as immune as I think I am.

Case in point: THE EMPIRE by Elizabeth Lang.

THE EMPIRE is published by IFWG Publishing, “a small press that specializes in speculative fiction.” Chief Editor Gerry Huntman alerted me about this title, sharing that the book contains both SF elements and romance. I thought, “Cool!” and clicked through the link to learn more about the book.

Upon seeing the cover, my reaction was along the lines of “Ah…ohh…uhhh…hoo boy…ehhh…ugh.” 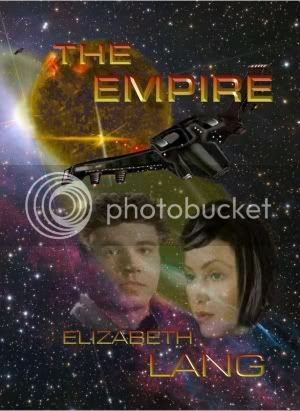 Allow me to translate that for you. At first, I was like, “Wow, they nagged Sean Astin as the cover model for the hero!” See, I’m a big Sean Astin fan (even before LORD OF THE RINGS—you Goonies knoweth of what I speaketh) and an even bigger fan of his actor mom, Patty Duke. In fact, I bow before the everlasting glory of THE PATTY DUKE SHOW.

Ahem. Anyway, my second thought was that the space ship featured on the cover resembled a video game controller. Not a good sign since the blurb didn’t indicate that a videogame system existed anywhere in the story. And did someone photoshop a wig on that poor woman?

Here was a cover that clearly conveys science fiction romance elements (Couple! Starry backdrop! Starships!), yet the technical flaws were testing my immunity in ways I hadn’t anticipated. The cover for THE EMPIRE made me question what I truly want in SFR covers. Is it better to accurately represent the story, even if the end result is of questionable quality? Or is a simple approach more effective when one doesn’t have the resources of a Big Six publisher? Either way, readers might be lost.

I can overlook technical flaws in a variety of mediums (meaning I’ll at least start a story despite fugly visuals), but regardless of my personal opinion, first impression visuals are important to many consumers. Never mind the fact that one has to pay for the entertainment, so it’s reasonable to have high or medium-high expectations about the packaging.

Despite my apprehension about the cover’s technical flaws, Mr. Huntman kindly sent me a copy of the book for my perusal. I wasn’t sure what to expect. The cover screams science fiction romance, but the blurb led me to expect more of a politically-driven saga.

Given all of these issues, I read THE EMPIRE with one goal in mind: to determine if the story delivers more than what the technical flaws of the cover indicate. In other words, is it unfair to judge this book by its cover?

Here's the premise: the story features an Empire that faces threats on two fronts: an invasion by the Andromedans, and a rebel faction from within its own territory. Caught in the middle is scientist Lt. Adrian Stannis, whose superiors try to force him to create an uber weapon that they want to unleash on both the alien invaders as well as the rebels. Adrian’s love interest is Kali, a telepath from a neighboring race that’s allied with the Empire. The core conflict arises from Adrian’s resistance to the Empire’s manipulations: Will he or won’t he succumb?

Elements that I felt were better than what the cover promised include:

* THE EMPIRE is definitely political in nature, but upon reading the book, I was pleasantly surprised to discover how character-driven it turned out to be.

* The prose. I was concerned it’d be a jumbled mess, but it was absolutely competent and had some nice description in places.

* The author has a good grasp of writing for the romance crowd when it came to scenes of emotional connection and intimacy.

* The setting was believable, if derivative in places.

* The sadistic tendencies of the Empire's powers-that-be surprised me, but in general I like surprises so I was able to roll with it. If you don’t like squickish torture scenes, you may want to steer clear.

* Two secondary characters stood out for me and they both had good dialogue.

* The author presented a multi-faceted villain. Villains like a “totalitarian society” can fall into the trap of two-dimensionality, but in this story, evil had a name, a face, and layered motives.

* There is a Happily For Now for the main couple. There’s also a secondary romance.

THE EMPIRE strikes me as romantic SF that’s heavy on the romantic elements. I would have liked for the romance between Adrian and Kali to have more of a set up, but it’s a flaw I’ve encountered in other stories as well. It’s not necessarily a deterrent, especially if you’re coming to this book from the SF side.

If I were to recommend this book to anyone, it’d be specifically to readers who are diehard Star Trek fans (e.g., Next Gen, DS9 more than the original series, actually) *and* fans of dystopian stories such as George Orwell’s NINETEEN EIGHTY-FOUR. And I do mean diehard Star Trek fans, because THE EMPIRE features an ensemble cast and the story structure is such that every major character—and a few secondary ones—gets about equal stage time.

The reason I cite Star Trek is because those series are also highly character-driven (as opposed to plot driven). THE EMPIRE takes its time spinning the tale and is quite “talkie.” There are also constant POV switches throughout (sometimes within a paragraph). When the scenes and/or POV would switch, the transitions reminded me of watching Star Trek episodes where the viewer would follow different characters at different times during episodes.

You might also like this book if you’re into political mind games, which the author depicts in great detail. Also, I hereby pronounce Adrian the King of All Angst.

Is THE EMPIRE worth the price of admission?

U.S. readers can purchase the print version through IFWG for $19.99 ($23.99 for Canadian readers; $33.99 worldwide). However, there’s a much more budget-friendly Kindle version available for $5.00. Frankly, that’s the price I’d recommend paying when one factors in the cover as well as the story.

In addition to Elizabeth Lang’s Web site, you can also find her on Facebook.

What are your thoughts on accurate, yet technically flawed science fiction romance covers? Assuming small press publishers must always contend with a limited marketing budget, should they keep producing them, or take a simpler approach?