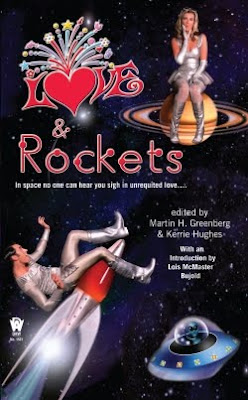 Lois McMaster Bujold recently posted her introduction to DAW’s LOVE AND ROCKETS anthology (*waves to Mike B. who tipped me off*). Since she always writes/speaks about blends of science fiction and romance with such eloquence, my post today will serve as a gateway for her incredibly insightful comments.

Her piece is titled "SFR -- Not Just Science Fiction Research Anymore." Here’s her take on the core definition of science fiction romance:

So to my way of thinking, the ideal SF-romance crossover story would not be to drop the same-old-pattern down in front of a futuristic backdrop that might as well be plywood for all the difference it makes, but to actually explore what striking changes new technologies or other aspects of the world could make to the entire sexual negotiation. What new patterns of relationships might result? Who wins what, and how? It shouldn’t be so hard; we’ve seen it in our own world, worked examples with the impact of birth control and other technologies that have partially liberated women, and with them, men, from the patterns of the past.

Splendid, I say! We’d be hard pressed to find a more accurate way to encapsulate the subgenre. SFR simply tells the story at a point where change intersects with a blossoming romance. Solidifying a definition is key because it helps authors ground the stories they’re telling as well as gives us a lens through which to interpret them. The definition is almost intuitive, yet not at the same time, especially given how noisy marketing labels and even reader expectations attempt to pigeonhole the subgenre into one thing or another.

Ms. Bujold’s definition invites readers to create a new expectation, one they’ll need in order to obtain the most satisfaction from an SFR tale. The other reaction I had is that the definition also validates the idea that romance can be about more than just a relationship, and that SF can be about more than just technology. Cross-genre tales can work well when their goals are clear.

After you’ve read her post, come on back and tell me what you think.