A Really Swell YA SFR: Toni LoTempio’s MY SUPERHERO SISTER

A long time ago, in a galaxy far, far away, I had an opportunity to read an early draft of Toni LoTempio’s MY SUPERHERO SISTER. Well okay, it wasn’t all that long ago or very far away, but it seems like I’ve been waiting forever for this book to hit the shelves. Eventually, it did hit the shelves, but not the kind I was expecting.

I’d met Toni online and (in the interest of full disclosure) we became friends. When I learned she was working on a story called MY SUPERHERO SISTER, I was immediately hooked. The catchy title alone tells you exactly what the story’s about without giving anything away. I was intrigued enough to read the manuscript when she asked if I could give her some feedback.

I had a lot of fun reading Toni’s story. While I wasn’t the target audience, the premise, tone and setting had a huge retro SF B-movie appeal for me. Plus, there’s a romantic subplot. Despite having read an early draft, I couldn’t get the story out of my mind. Here’s a book that deserves to be published, I thought.

As the months (and months, and months) passed, I kept waiting and hoping for MY SUPERHERO SISTER to get published. I’m sure Toni did, too, LOL! But Toni started shopping the manuscript around at a time when the publishing industry was entering dangerous waters. On the other hand, the rise of the digital market was just around the corner.

Long story short, Toni then revealed to me that after much effort and many obstacles, she decided to e-self-publish the book. Since the topic of YA science fiction romance occasionally crops up on this blog (and Beth Revis’ ACROSS THE UNIVERSE will probably make for an interesting discussion at some point ), I seized the chance to invite Toni LoTempio for an interview so we can learn more about her book. MY SUPERHERO SISTER may not sport the hippest cover ever, but it’s a great introduction to science fiction romance for young readers. Especially girls with penchants for comics and superheroes—boo-yah! 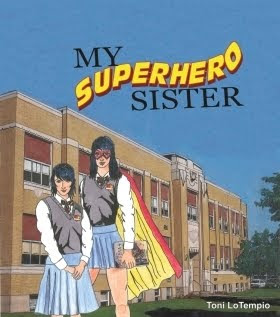 Following the interview is a giveaway of her book. But first, here’s the story blurb:

Holly Hamilton has always been jealous of the way everything—from good grades to boyfriends—seems to come easily to her older sister, Ellen. It's tough living in the shadow of her sister's cape, especially since Ellen’s a super heroine!

Ellen, a.k.a. Suprema, has assumed their retired father’s role as Century City's reigning superhero, balancing school and super-duties with remarkable ease. An ordinary human like their mother, Holly struggles to get through English class without mishap, not to mention those Cheer Squad tryouts.

The girls learn their father’s old nemesis, Anti-Hero, has escaped from his Space Prison. When teen superhero extraordinaire Magna Boy appears on the scene, Holly and Ellen start competing for his attention. But is he friend or foe? And does he have a connection to Anti-Hero?

Holly uncovers Anti-Hero’s dastardly plot, but before she can warn Suprema, Anti-Hero strikes and captures Suprema and Magna Boy. With Earth’s future at stake, what chance does ordinary Holly have against the most dangerous villain in the world?

Now for my interview with Toni LoTempio:

The Galaxy Express: What’s the basic premise of MY SUPERHERO SISTER?

TL: It’s a sweet coming of age story about a fifteen year old girl who’s a bit jealous of her sister, who’s perfect in every single way – and who’s also a superhero! Holly’s a normal girl, but it seems to her that supersis excels in everything – and just once, she’d like to come out on top.

TGE: Who is the audience for the story?

TGE: Where did you get the idea for this book?

TL: I’ve been a huge fan of superheroes since I was a little girl. I think I had one of the largest DC comics collections in New York (when we moved to Jersey my mother threw most of them out – that’s another sad, sad, tale) I loved Superman, Batman, and the like, and after I saw the movie, MY SUPER EX-GIRLFRIEND, I wanted to do a book about a superhero. I started out making it an adult read, but when the story started writing itself it seemed a better fit for the YA audience.

TGE: What sets MY SUPERHERO SISTER apart from other books in the genre?

TL: The underlying message of coming of age – and the sibling rivalry between Holly and Ellen, her super-sister. Most superhero books I’ve seen focus mainly on saving the world – this is about a girl realizing her own self-worth.

TGE: What superhero films would make good companion pieces for this book?

TGE: Why did you decide to self-publish this book?

TL: Three years ago I had an agent who helped me revise the ms, then promised to send it out, but – nothing. Eventually I fired the agent and shelved the book, but after a friend of mine had great success self-pubbing her fantasy paranormal, she talked me into putting some of my manuscripts up. My other indie, NO REST FOR THE WICCA, is an adult paranormal romance.

TGE: If you could be a superhero, what power would you choose?

“So far, you’ve managed to squeak by in my class with a C average,” Ms. Proctor smirked. “I know you can do work far above a C, Ms. Hamilton. I think you just don’t apply yourself. Perhaps receiving a failing grade and not being able to be a cheerleader will supply the push you need to get those grades of yours up.”

She leaned over, so close our noses almost touched. “You want to get into a good college, don’t you? Well, then, it’s time you started utilizing that brain of yours.” She flashed me an especially evil grin. “Like your sister.”

My tongue snaked out to moisten my lips. “I don’t mean to contradict you, Ms. Proctor, but I would like to set the record straight on one thing.”

Both eyebrows shot straight up to form a perfect V in the middle of her unusually high forehead. “Oh, really? What might that be?”

I cleared my throat. “I just want to state for the record that I’ve got my own personality—my sister has hers. I don’t think always being compared to her is fair.”

Ms. Proctor regarded me in silence for a few minutes, then the corners of her thin, colorless lips twitched. “No one said life was fair.” She held out her hand. “May I see that binder?”

I clutched it tightly against my chest. “Ah--can’t you just take my word for it?”

The set of her jaw was answer enough. “The binder, Ms. Hamilton, if you please.”

Reluctantly, I placed it in Proctor’s outstretched hand.

“Thank you. Now, let’s see if you had any original thoughts on your English reading assignment, or if you depended on Cliff Notes to do your work for you—goodness!”

A sharp wind gusted through the open window just behind Ms. Proctor’s left shoulder. The jet stream scattered papers helter-skelter, and blew with such force it pushed some kids standing against the far wall down to the floor. Faster than lightning, it plucked the binder from Proctor’s hand and in a whirling motion sent it spinning across the room. Backpacks, pencils, and one boy’s camera sailed up into the air from the force of the wind. Everyone started shouting at once, trying to be heard above its howling:

“Where did this come from?”

As the gale subsided, everyone crowded at the window. Indeed, the tip of a whirling dervish could be seen disappearing over the crest of the hill.

“Wow,” breathed one tall sophomore. “Never seen anything like that before.”

“No,” agreed another. “Cool and scary, all at the same time.”

As my eyes narrowed with sudden suspicion, Ms. Proctor leaned against the wall. “That was close,” she said. “We’re lucky there wasn’t more damage. Now, if you will excuse me—“

She lumbered across the room, presumably in search of my binder, and I heard a loud hiss come from under the windowsill. I glanced around and, seeing that no one paid any attention to me, I poked my head outside.

Ellen brushed some dirt and grass from her skirt. Clutched in one hand was my binder.

Ellen just smiled and pushed the binder into my hand.

“Give Miss Proctor this one, won’t you?” she said with a wink. “And from now on, do your assignments on time.”

Then she was gone, another blur.

I gave the binder a drop-kick into a far corner of the room, then shuffled back to my seat. I watched till Proctor found it, cradling it to her chest like it was gold or something precious over to one corner to read. I busied myself with the rest of my Algebra homework. A half-hour later when the bell rang for the next class, she hurried over to me, binder in hand. .

“I must apologize, Ms. Hamilton,” she said softly. “That was actually the best review of Silas Marner I’ve read in quite awhile. You must have really loved that book.”

“Oh,” I said as I slipped the binder back in my backpack, “I did. I really did. I can honestly say writing that piece was a—a moving experience.” Good old Ellen comes through again.

“Well…” Proctor paused, clearly floundering about for words. I was vastly amused. I’d never seen the teacher at a loss for words before. “Possibly I was wrong about you, Ms. Hamilton. We’ll just see what you do with the next report.”

I turned and hurried from the auditorium, hoping that the next report due wouldn’t be on Gone with the Wind.

TGE: Where can readers buy MY SUPERHERO SISTER?

TL: It’s available at Amazon, Barnes & Noble and Smashwords for $1.99.

TL: I love hearing from readers! They can email me at superherosister “at” yahoo.com, visit my website at www.freewebs.com/toni1953, or visit my cat’s blog at www.catsbooksmorecats.blogspot.com.

Toni, thanks for your time, and for your art.

Courtesy of the author, I’m giving away a digital copy of MY SUPERHERO SISTER to one lucky passenger! Edited to add: The winner will receive a Smashwords coupon to download the book in the desired format.

To enter, tell me the name of your favorite superhero in the comments.

More ways to win: If you blog and/or tweet about the contest, copy and paste the link from your announcement(s) in the comments and I’ll give you an extra chance to win for each one.

The deadline to enter is 6 pm on Sunday, February 6, 2011. I’ll announce the winner Sunday night.