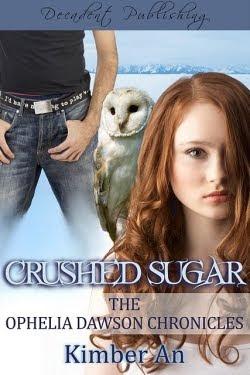 Today marks the release of CRUSHED SUGAR (Decadent Publishing) by YA author Kimber An. CRUSHED SUGAR is a prequel to her debut novel SUGAR RUSH. Perhaps Kimber an will get a science fiction romance published for me one day, but in the meantime, to celebrate the release she's here to give away an e-copy of CRUSHED SUGAR to a Galaxy Express passenger!

On her author site, Kimber An describes CRUSHED SUGAR thusly:

The most important thing to know about this story is that it is a PREQUEL to Sugar Rush, like Star Wars Attack of the Clones is a prequel to Star Wars A New Hope, the originally released movie of that franchise. I'm toe-jam compared to George Lucus, but I can tell you writing a prequel is scary. Crushed Sugar takes place over the course of two days in September *before* Sugar Rush, which is set in December and January. It's a much shorter tale of a faint heart, a fair maiden, and a blood-sucking dead guy.

Ophelia’s had a wicked crush on Martin since they were kids, but she was always just his geeky little friend. Then, on the first day of her junior year, he’s suddenly and wildly attracted to her. She can’t imagine what’s changed, but shocking her small school’s social order fills her with vindication for insults suffered.

Ophelia meets Adrian right after and true love extinguishes the wicked crush. In secret, he gives her courage against a specter threat.

Tristan is pale and hungry, and draws Martin’s immediate ire. He knows things about Ophelia which she assumes are delusions brought on by an aggravated illness like her own, diabetes. When battle breaks out between his ancient race and new blood, even the courage of her secret love might be crushed.

To enter for a chance to win an e-copy of CRUSHED SUGAR, simply leave a comment describing your favorite thing you like to do with sugar. Available formats: PDF, HTML, LIT, PRC and EPub. The deadline to enter is midnight EST on Tuesday, March 29.