No Time Like The Present For J.L. Langley's MY FAIR CAPTAIN 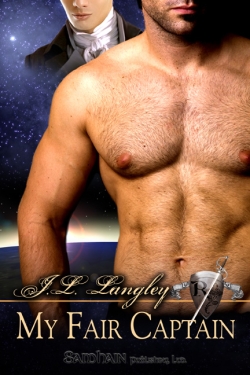 I’ve known about J.L. Langley’s MY FAIR CAPTAIN (Samhain Publishing) for some time. Given the 2007 publication date, I should have read it a lot earlier. However, better late than never: An improved personal budget, owning a Kindle, and this recent post at The Naughty Bits prompted me to go ahead and finally purchase it.

More specifically, it was the following comment by Teddy Pig that propelled me to order it immediately:

I also think My Fair Captain should be reviewed since it is going Japanese soon which for that book is like going full circle in it’s own Jane Austin meets Star Blazers in a dark alley way.

Well! Given my love affair with STAR BLAZERS, how could I possibly resist? I’d heard good things about MY FAIR CAPTAIN, but hadn’t heard the story described in quite that way before. (Click here to read the author’s brief announcement about selling the Japanese rights.)

Having finished the story, I didn’t detect any overt STAR BLAZERS homages or references, but was glad to have finally experienced it. If you’re unfamiliar with the story, here’s the blurb courtesy of Samhain:

Talk about a compromising situation!

A storm of political intrigue, murderous mayhem and sexual hungers is brewing on planet Regelence.

Swarthy Intergalactic Navy Captain Nathaniel Hawkins ran from a past he had no intention of ever reliving. But when his Admiral asks him to use his peerage, as an earl and the heir to a dukedom, to investigate a missing weapons stash, he’s forced to do just that. As if being undercover on a Regency planet where the young men are supposed to remain pure until marriage isn’t bad enough, Nate finds himself attracted to the king’s unmarried son.

All Prince Aiden Townsend has ever wanted was to be an artist. He has no interest in a marriage of political fortune or becoming a societal paragon. Until he lands in the arms of the mysterious Earl of Deverell. One look at Nate’s handsome face has Aiden reconsidering his future. Not only does Nate make a virile subject for Aiden’s art, but the great war hero awakens feelings in Aiden he has never felt, feelings he can’t ignore.

After a momentous dance at a season ball, Aiden and Nate find themselves exchanging important information and working closely together. They have to fight their growing attraction long enough to find out who stole the weapons and keep themselves from a compromising situation and certain scandal.

MY FAIR CAPTAIN, as part of the author's “Sci-Regency” series, is based on a high concept premise that you either buy into or you don’t: an entire planet with a Regency England based setting—along with an m/m twist. I thought the author made the clever premise plausible, but your mileage may vary. As I was reading, a few interesting elements popped out at me. In addition to tagging them, I wanted to share a few of my thoughts about the setting.

* Planet Regelence, where most of the story occurs, struck me as cosplay writ large in terms of its social, culture, and political evolution. The worldbuilding goes beyond cosplay, of course, but the characters seemed to be having so much fun dressing like the people of Regency England simply because they could.

* Future tech is woven into the fabric of Regelence society (e.g., an interactive “castle computer”, mobile devices like a “sketchscreen”). It was a lot of fun seeing where the tech would show up.

* Genetic engineering plays a core role in the worldbuilding. In Regelence’s patriarchal culture, women as childbearers are off the hook irrelevant. Offspring are genetically engineered to be both male and gay. As explained by one of the characters in the text, this aspect is rooted in the principal that “lovers would fight better together than non-lovers because they would be less willing to disgrace themselves in battle.”

* The story features an “Intergalactic Navy” (no space battles to speak of, though)

* This series will appeal to readers seeking a story that’s light in tone—or maybe for one of those times when you can’t decide if you want to read a historical or sci-fi romance!

Ultimately, MY FAIR CAPTAIN is more of a character-driven SFR than a plot-driven one. Except for being m/m and featuring graphic love scenes, the romance felt very traditional. In the context of Regelence society, Aiden is the equivalent of an “ordinary” heroine: virginal, naïve, innocent. Captain Hawkins is the strong, valorous warrior who rescues him. In terms of the romance, no new ground is broken in MY FAIR CAPTAIN, but I’m sure this story has appealed to many readers for just that reason. The m/m and Sci-Regency setting delivers the exotic while the respective roles of the heroes deliver a sense of the familiar.

J.L. Langley also wrote THE ENGLOR AFFAIR, another book in her Sci-Regency universe. I intend to read it, but I’m also wishing for potential future stories to take a path that’s more serious in tone. Not because I disagree with the tone of MY FAIR CAPTAIN, but because the basic premise and worldbuilding promise so much more.

I’m envisioning a re-booted saga that reveals all the different sides of a Regelence-type culture in a futuristic setting. Lots of subtext would be A-OK. For example, I would be interested in reading tales that show how Regelence fits within the context of the greater galactic community (e.g., how much political power it wields, what it offers in terms of trade or knowledge, culture clashes with neighboring planets, and/or how its society adapts to increasingly progressive technology). I’m thinking a series of standalone romances with linked characters and an overarching plot. With space battles, Sci-Regency style! The seeds are there, at any rate.

However, maybe that’s just me—because I do like SFR that’s on the darker side. Still, that won’t stop me from speculating about the possibility of J.L. Langley—or perhaps another author entirely—to plant the same seeds yet grow a different type of flower (like a Venus Flytrap instead of a rose, heh). That way, readers who are interested in this type of setting can enjoy a variety of species.(In the meantime, the author has three free stories available on her site.)

If you’ve read MY FAIR CAPTAIN, I’d love to know what you thought about it.