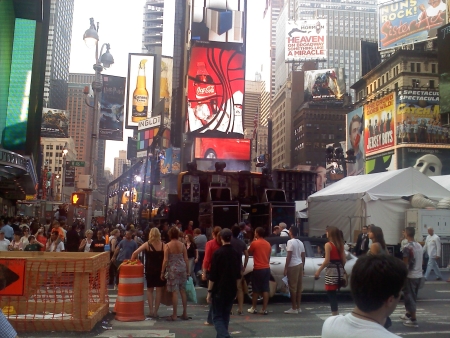 The 2011 RWA conference is in full swing in New York City. Golden Heart nominee Laurie A. Green contacted me with some SFR-related news:
The SFR Brigaders in attendance kicked things off Tuesday evening with a gathering at The View hotel—in a revolving lounge, no less! The soiree included RITA-nominee Marcella Burnard, Laurel Wanrow, Darcy Drake, Sarah Shade, Jennifer L. Hart, Jenna McCormick, Donna S. Frelick, Laurie A. Green, and new draftee Theresa.
And if you’re thinking of pitching your science fiction romance manuscript to agents, Laurie reported that about nine agents taking pitches at the conference listed SFR as an area of interest. This number is a huge increase from last year, when there were…*crickets chirping.*
Also, Lisa Paitz Spindler (THE SPIRAL PATH) has been busy with conference reports on Twitter. Here’s the first of two tweets about the Carina Press Spotlight:

Nice!
And the second: