[Note: This post contains very minor spoilers about one of the secondary characters in PJ Schnyder’s HUNTING KAT]

Normally, I’m of the opinion that secondary characters should remain that way—secondary. In other words, once they occupy a certain role in a story, the boundaries are set and I would prefer that they not be crossed. In that sense, I view the role of a secondary character to be quite sacrosanct.

No matter how much I think I want more of them in the original story or would like to see them headline in a spin-off story of their own, I realize that’s more about me and my subjective reaction than the organic needs of the story. In fact, I rather enjoy the tension that comes with discovering a great secondary character whose further development is essentially forbidden. When an author (or filmmaker) limits the exposure of such a character, he/she becomes all the more exciting for me.

I’m aware that many romance authors, and by extension many sci-fi romance ones, routinely spin-off secondary characters into the heroes and heroines of future books. When it comes to this practice, I can take it or leave it. If the series involves an external plot arc that is told across several books, it makes sense to bring a few secondary characters to the fore; but sometimes I still wish for an entirely new set of characters with each book.

Now, forget everything I just said.

While reading HUNTING KAT by PJ Schnyder, I developed a serious attachment to one of the secondary characters in this author’s space opera romance novella (click here for the story blurb). So serious, in fact, that my challenge to you, Ms. Schnyder, is this:

Make Boggle the hero of a future story in your Triton Experiment series.

What’s got me all hot and bothered about Boggle? Well, dear passengers, I’ll tell you. 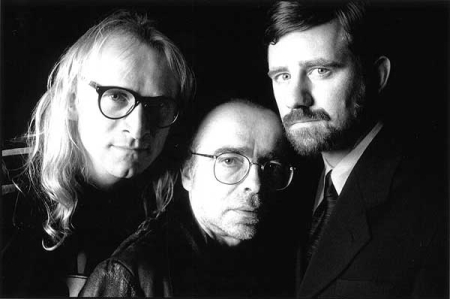 Boggle is a “Lone Gunmen” style computer whiz and a hacker by trade. His presence brings a wee bit o’ cyberpunk flair to the story. If that’s not hot enough for you, he’s an invaluable asset to the heroine, Kat Darah. His dialogue is sharp, funny, and endearing. Boggle also makes a mean cup of joe (that about clinched it for me).

There’s more to Boggle than meets the eye, and he sure is an eyeful. Here’s a snippet of the scene wherein Kat first makes his acquaintance:

A heavyset man rotated on a motorized chair to face her, pushing magnification goggles away from beady, close-set eyes. He blinked twice, leaning his not-so-impressive bulk forward to study her.

Kat—who has heightened senses because of her condition—assesses Boggle further:

He was harmless. Okay, maybe a little creepy, but harmless.

Also, he was a damned heavy nerd-boy. 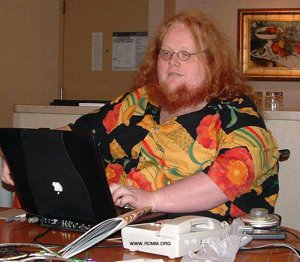 I feel that the author walks a fine line between creating a sympathetic geek character and inviting readers to laugh at Boggle’s slob king routine in all his Harry Knowles-esque glory. The latter is illustrated in Kat’s reaction when it’s clear that Boggle is attracted to her:

“A rush of arousal filled the air. Gross. She hadn’t scared the piss out of him, she’d pushed him into a money shot. Oh, ewww.”

There’s also a scene describing how Boggle spits out food while speaking.

Despite the overabundance of geek clichés (what, no living in his mother’s basement?! ;)), Boggle’s sympathetic side won out for this reader and made me hungry (!) to experience him in a science fiction romance of his own.

I am dead serious.

In my totally unsolicited opinion, Ms. Schnyder, you created a character with more than enough personality and intrigue to carry his own story. It’s a testament to your mad writer skillz that I see this potential. Boggle possesses talents that hint at a very powerful character, power that’s just as exciting (if not more so) as a hero with chiseled features and a sculpted bod. Given the political overtones in HUNTING KAT, I for one would like to see Boggle’s potential fully explored.

To up the ante even further, I would love to read an SFR about Boggle as he’s depicted in HUNTING KAT. As it stands, Boggle would be very easy to root for, so I don’t see the need for him to enter a weight-loss program, upload himself into a Westernized, 21st century “socially acceptable” body type, or become a virtual superhero with a six-pack (unless it’s a six-pack of soda). Frankly, Boggle is his own class of sexy.

And the love of his life doesn’t have to be his kick-butt fantasy woman, either. In my possibly-crossing-the-line opinion, Boggle only thinks he’s attracted to someone like Kat. I suspect his true love is someone very different, both physically and emotionally (she doesn’t have to be overweight, either).

I fully realize what I’m asking for here. It’d be a huge challenge not only to write a convincing SFR featuring a massively overweight, physically disabled, and geeky-to-the gills hero, but also to make enough sales for it to be worth your while (and your publisher’s, should you go that route). I mean, geez, how many obstacles to success are we talking about here?

Quite a few, but not as many as we might think.

Encountering Boggle only reinforced my belief that science fiction romance is the place for such cutting-edge stories—especially ones that subvert the norm, make us think, and take SF-romance blends in new directions. Heroes like Boggle have typically been deemed unworthy or unmarketable, even though the truth is they can be just as compelling and are as deserving of stories as any other.

Are authors and readers up for this type of challenge? What do you think?