Parallel Universe: Love At The Speed Of Light by Lisa Paitz Spindler

Faster than light travel. Other dimensions. Aliens and cyborgs. Science Fiction can make your head spin with its high-minded concepts. Recently, though, character-driven stories have become popular without sacrificing all of those nifty scientific details. This quantum leap has opened the door to Science Fiction Romance and a whole new audience.

Some readers are intimidated by science fiction, including even those who regularly read forensic crime analysis or epic Medieval fantasy. These same readers are perfectly comfortable following the minutiae of bullet trajectories or learning U’namish, but are stumped that we can’t travel faster than the speed of light.

That’s where romance comes in. It’s not the nitty-gritty detail of science fiction that readers balk at, it’s an inability to relate to those details. Police procedurals revolve around the concept of justice and epic fantasy speaks to a need for escapism. Science fiction offers its own “sense of wonder,” but that zero-G feeling that so many SF fans love is the very thing that freaks out others. They need another way to relate to the story. For instance, new quantum physics theories claim there are ten dimensions in space-time. What could this mean for me, right now, in my living room on planet Earth?

Picture this: The man you love is from one of those dimensions. His very existence is in more danger with each passing minute he spends in your presence. What if you could solve that problem and have him by your side until you’re both old and gray? 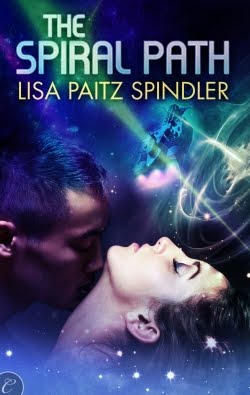 In my debut novella THE SPIRAL PATH, scientists have discovered a way to inflate wormholes and travel to another dimension. They soon realized that people and objects didn’t fare so well in the opposite dimension. In fact, after a short time, objects and even people fell apart. Turns out, at the Big Bang every dimension vibrated at its own frequency and never the twain shall meet. In the meantime, some travelers had developed relationships and others had even conceived children. And now those families were being ripped apart.

This is the world Lara and Raphael Soto were born into, rare live births and even rarer twins. Children like them, called Chimerans, could live in both dimensions, but not their parents. So they grew up in fractured families, something many of us today — in our living rooms right here on planet Earth — can relate to.

Lara grew up and fell in love not with another Chimeran, but with a Star Union officer named Mitch Yoshida. Neither dimension knows just what to make of the Chimerans, but both also want to use them to their own advantage. The situation turned sour enough to force a mass Chimeran defection with Lara at the helm, but she had to leave Mitch behind. Not all Chimerans defected, however, and Raphael stayed on to serve with Mitch in the Star Union. When he goes missing on a dangerous mission, Lara and Mitch must team up to find him and dredge up their feelings for one another all over again.

The Romance genre excels at meshing with just about any other genre out there because it focuses concepts through relationships. We all want to be loved, whether you live on a mid-western farm at the turn of the century, solve crimes in a giant metropolis, or travel faster than light to Gliese 581d – or even in another dimension. SFR can show us how science affects our daily lives and relationships and how scientific developments in a lab can have real effects on our world.

Lisa Paitz Spindler’s debut space opera novella THE SPIRAL PATH is available from Carina Press. An SFSignal.com contributor, Lisa also maintains the Danger Gal Blog hosted by her alter ego, Danger Gal, whose stiletto heels are licensed weapons and whose ninja stars travel faster than light. Lisa, however, gets through each day on caffeine and science blogs, but can also be found on Twitter and Facebook.
Posted by Heather Massey at 9:00 AM
Newer Post Older Post Home