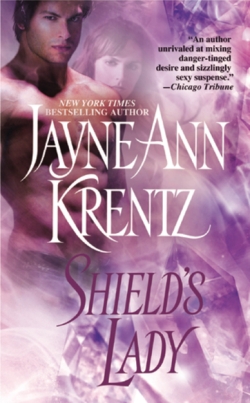 I recently finished SHIELD’S LADY by Jayne Ann Krentz (thanks to a little birdie who sent me the book). While it’s a whopper of an old skool sci-fi romance and probably deserves a post of its own, I’m actually going to touch upon one of the elements that made me go “Hmm...I need to blog about this.”

Without going into spoilers, I’ll simply say that SHIELD’S LADY featured the development of a psychic link between the hero and heroine. More specifically, it kicked off as some kind of sexual mind meld. When Gryph and Sariana made love, the mind link amplified and reflected their feelings and physical sensations to one another. In essence, their psychic connection made the sex extra hot and pleasurable.

You know how it is in these types of stories.

For what it’s worth, Gryph’s psychic ability came from science (plausible? Not really, but believable for the story).

Yet, at the same time, the psychic link made the love scenes feel awfully porn-ish, mainly because it seemed like the device was present only to titillate.

During the story, Gryph even acknowledges to Sariana that the mind link affects/accentuates the physical/ sexual relationship first, and then other types of telepathic abilities follow as the couple's relationship grows.

Boy, that sure is convenient. And compared to the power of the sexual mind meld between Gryph and Sariana, the other telepathic abilities were far more scarce and underutilized IMHO.

I couldn’t figure out the reason for Gryph’s explanation. Speculation ran amok in my mind. Was it a veiled message or commentary from the author about some kind of relationship issue? Did she even intend to supply such commentary? Was it meant as a justification of some sort for using a psychic link to titillate, rather than explore what such a link would mean in non-sexual contexts? I found the whole experience perplexing, fascinating, and kind of weird.

I'll give Krentz props for the whole psychic love link concept, even though it feels overdone now what with the plethora of paranormal romances and some sci-fi romances featuring that trope. Does anyone know if she was one of the first to feature it in a futuristic/paranormal romance? To put the question another way, was she among the first to popularize it?

Here’s the thing: I have mixed feelings about these types of sexual mind melds (meaning the ones rooted in science). On the one hand, the fantasy of an enhanced sexual encounter via a mind link is quite fun. If science ever found a way to deliver that for real, I can’t say I wouldn’t be interested. There’s also the romantic idea of a mind link symbolizing the special bond between two people.

But then I got to wondering: Must the telepathic link between a hero and heroine only involve titillation? It seems to be associated quite strongly with it in sci-fi romances these days (at least, it has been in my reading experience).

I’m trying to remember stories both past and present wherein the mind link between a hero and heroine was used largely for external plot purposes as opposed to lovemaking, and I’m coming up short.

Are there any (non-paranormal) sci-fi romances that feature the psychic link concept for political/action-adventure purposes? For example, the hero and heroine are psychically linked, and use their abilities to navigate politically charged environments; or they use their mind reading powers to extract information and rescue people; or they communicate secretly with each other during combat and thus gain an advantage. Maybe the stories are out there and I just haven’t read/discovered them yet.

The ramification issue plays a crucial role, come to think of it. I have a difficult time suspending disbelief for a telepathic link that only seems to be active in the bedroom. In essence, it’s not the psychic love link itself that’s a problem. It’s how it’s used—or not used—throughout the story.