I’m attempting to re-boot my feelings about comic sci-fi romance. There don’t seem to be too many of them around, but all of a sudden it seemed as though a few started piling up on my Kindle. I’d read a scant couple of books in the past two years, but given the emergence of some new titles, I thought I’d take the plunge and read the new ones I acquired back-to-back.
I decided to approach the books from the comic angle. In other words, I went in with the expectation to be entertained by the comedic aspects first. While I expected at least a modicum of decent SF and romance elements, I decided not to anticipate them as the main draw. Instead, my funny bone led the way.
Below, I touch upon some of my experiences reading the first two books that were in the queue. I included some tags so you can decide if these books are up your alley: 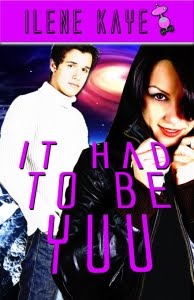 Only space survey pilot Audra Marin's childhood playmate could manage to get himself kidnapped on a planet experiencing its worst winter ever and not even know it . When she gets him home alive, she’ll make him pay.

Only corporate heir-apparent Yuu Ra-Dezan's old playmate could stumble into the middle of his embezzlement investigation and complicate matters with her sharp tongue and hot kisses. “She’s my fiancée” seems like a harmless cover story at the time…

While his host’s artificially intelligent robots hold them at blaster-point, Yuu and Audra trip over each other to foil a plot to steal the fastest ship in the galaxy. The only piracy these two will accept is stealing each others’ hearts.
**
When Ilene Kaye described the hero and heroine as tripping over each other, she wasn’t kidding! This story is loaded with pratfalls. IT HAD TO BE YUU is a very light-hearted story. I would interpret the humor as broad and full of slapstick—almost vaudevillian in nature (if the characters had broken out in song, I wouldn’t have been surprised!).
The skiffy elements are pretty standard, and the space opera setting is of the general humans-have-colonized-the-galaxy kind. The romance is sweet (and also sweet as far as heat level) and is of the friends-to-lovers variety. Neither is breaking new ground here, but I suspect that was rather beside the point.
The breakout character for me was a robot assistant by the name of Barbra. She has a speech quirk that I’m guessing is a parody of Barbara Walters, for example:
“You supwized.” Barbra tilted her square head. “That swuch an old mwodel wowks for Mwiswer Wowgal.”
Barbra has an axe to grind in the story, and provided a good part of the story’s forward momentum. She had some clever lines, a few of which even made me chuckle, and easily stole every scene she was in. So I was glad to have “met” her.
IT HAD TO BE YUU offers quick, solid escapism, good for those times when you’re waiting at the doctor’s office or need something light before bedtime.
TOUCHED BY AN ALIEN (DAW) by Gini Koch
Marketing manager Katherine "Kitty" Katt joins forces with gorgeous aliens from Alpha Centauri to protect the Earth, kick evil alien butt, and save the day with hairspray and rock and roll - not necessarily in that order.
ALIEN TANGO (DAW) by Gini Koch
For Katherine "Kitty" Katt, Alien Super-Being Exterminator, anti-alien conspiracies, threats from outer space, and a couple of killer alligators are all in a day's work, but internal alien conspiracies bring a new meaning to the terms chaos and confusion.
***
I had actually read TOUCHED BY AN ALIEN shortly after it came out, but it was only this past month that I caught up with ALIEN TANGO. Part of the reason I waited so long between books is that I tend to author hop, even if I like a series. The other is that I was still working through my ambivalent feelings towards comic sci-fi romance. In no way was my hesitancy related to the books themselves.
This series is a blend of comedy, SF, romance, and action-adventure. The author has created a sexy spin on the Men in Black trope. In fact, the romance aspect involves the same couple. Kitty and Jeff are giving J.D. Robb’s Eve and Roarke a run for their money. We don’t often rarely get a sci-fi romance series featuring the relationship development of a single couple over multiple books, so get it while the going’s good.
The first book sets up the world and the romance (of the sizzling, but non-erotic, kind). The plot is fairly straightforward: evil beings threaten Earth and our heroes unite to defeat them. But on the way, the author delivers all kinds of humorous scenes. The alien invader framework is something on which to hang her unique brand of humor, one that’s loaded with pop culture references and witty banter. In fact, if you read these books for the dialogue alone, I don’t think you’ll be disappointed.
The second book features a new group of villains. However, it also focuses much more strongly on the romance development. And also, alligators. I really enjoyed the alligators in this story, which is interesting—ironic?—since they are the least skiffy thing about it. One of them was a breakout character for me, but that’s all I’ll say in order to prevent spoilers.
(Say, if we’re lucky, maybe Kaye and Koch will collaborate on a comic sci-fi romance starring Barbra and the alligator…!).
Gini Koch’s Alien series should be read in order for maximum impact. The first two books, at least, feature sizable ensemble casts, so they’re best read after your morning cup of space java.
So, what did I learn from my most recent foray into comic sci-fi romance territory? It definitely helped to approach them in terms of their comedic sides. I was never really worried about the fate of any of the characters (not necessarily a negative when one is seeking lighthearted entertainment), but all three books did offer some social commentary. Finally, I was entertained enough to keep reading, so I’ll be back soon with another recap of my next adventure.
Joyfully yours,
Heather
Posted by Heather Massey at 8:04 PM
Newer Post Older Post Home