Read SPARKS IN COSMIC DUST, or Watch THE TREASURE OF THE SIERRA MADRE? 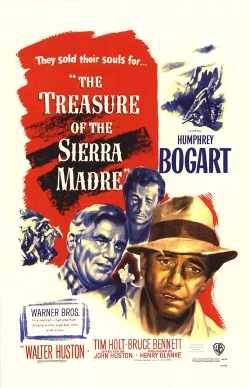 I’ve known about John Huston’s THE TREASURE OF THE SIERRA MADRE for a long time, but didn’t feel particularly compelled to prioritize it over other films. I mean, classic or no, it’s so gosh darn old, as films go. And I have plenty of other stuff I’ve been meaning to watch as well.

Why? Well, here’s what the author had to say on his book’s Acknowledgments page:

Special mention must go to John Huston’s classic 1948 Western, The Treasure of the Sierra Madre, probably the definitive story about prospecting for gold and the insidious nature of greet. It inspired Sparks in many ways, and though I’ve seen it countless times, I find its characters and themes endlessly fascinating. 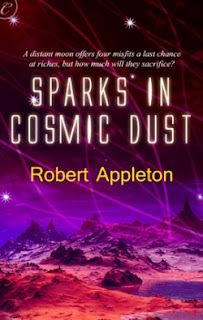 That statement intrigued me for a few reasons. One, I came to Westerns by way of Japanese animation shows, some of which drew heavily on classic Westerns by the likes of Sergio Leone (A FISTFUL OF DOLLARS).

And may I just say that Westerns rock the cinematic range!

Two, THE TREASURE OF THE SIERRA MADRE stars Humphrey Bogart. I’ve been periodically catching up with some of his films, and this represented a chance to get another one under my belt. Three, I knew I’d get to blog about both stories if I both read the book and watched the movie—boo-yah!!

So, I read SPARKS IN COSMIC DUST and right after finishing it, I borrowed THE TREASURE OF THE SIERRA MADRE from my local library (libraries rock, too!!!). I’m going to share a few observations about my experience, but first, I need to set all this up with a little background information about my movie viewing habits.

If at all possible, I prefer to watch the original film (or read the original book) before moving on to stories that were inspired by the original source material. However, that is frequently not the case owing to practical considerations like access, my mood, and/or budget.

For example, I saw BATTLE BEYOND THE STARS as a teen simply because it was on television, and therefore free. Then a number of years later, when I had an adult-sized income, I bought & watched the DVD of SEVEN SAMURAI, which inspired BATTLE BEYOND THE STARS. I enjoyed SEVEN SAMURAI so much that I wanted more. Hello, Pixar’s A BUG’S LIFE. But that still wasn’t enough. Several years later, I bought and watched the DVD of THE MAGNIFICENT SEVEN, a film that was also inspired by SEVEN SAMURAI.

A couple of other examples:

I saw STAR WARS before Akira Kurosawa’s THE HIDDEN FORTRESS.

I watched Leiji Matsumoto’s SPACE PIRATE CAPTAIN HARLOCK: ARCADIA OF MY YOUTH before I ever saw a single Western (even a casual viewing of Captain Harlock will tell you that Matsumoto was a big fan of Westerns at the time).

Most recently, I watched Tarantino's INGLORIOUS BASTARDS before THE DIRTY DOZEN.

You get the idea. So yes, some of my viewing habits run contrary to my intentions, but on the other hand, there’s a certain kind of delight in watching the remakes/reincarnations/“inspired by” films before seeing the original ones. Usually, viewing a more current incarnation can generate excitement for what came before.

The second I read Mr. Appleton’s acknowledgment, I knew I’d have to watch SIERRA MADRE. Westerns and sci-fi romance share many common elements, so I looked forward to expanding my entertainment horizons.

However, I realize that not everyone does this sort of thing. And when two versions of a story are separated by not only genre, but also medium and a lengthy amount of time and cultural changes, readers/viewers may not be inclined to consume both. They may, however, be interested in consuming one or the other. Hence, this post. 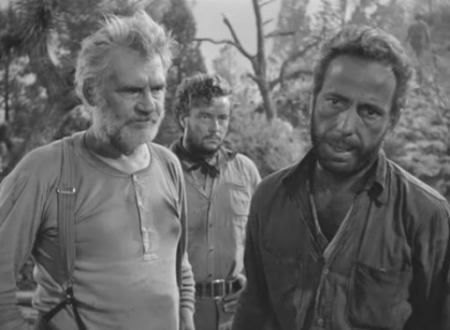 For some folks, THE TREASURE OF THE SIERRA MADRE (1948) might be too much of an older film to watch. It’s in black & white, fer gosh’s sake! Even Bogey’s appeal may not be enough of a draw to those steeped in “modern” films of the past twenty or thirty years. Given the vast changes in filmmaking technology, a certain mind set is often required when one watches vintage/classic films. 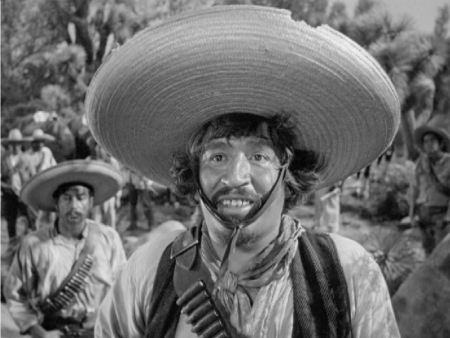 In truth, it’s not necessarily an either/or question. Some of you may indeed be curious to try both. But if not, I decided to explore some of the similarities and differences between the two stories.

THE TREASURE OF THE SIERRA MADRE is basically about two American prospectors, Fred C. Dobbs (Humphrey Bogart) and Bob Curtin (Tim Holt) hunting for gold in Mexico’s Sierre Madre mountains. Dobbs and Curtin are introduced to the joys and travails of prospecting by a grizzly old-timer named Howard (Walter Huston). The Dobbs-Curtin-Howard triumvirate sets up a tightly focused dynamic that’s effective in its simplicity. 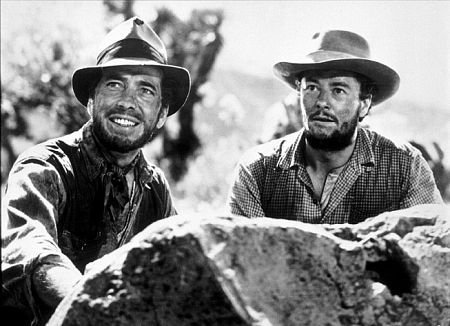 For a while, there’s a bit of a bromance happening between Dobbs and Curtin, but that’s it as far as any romance goes.

Dobbs is an increasingly unsympathetic character—actually, he’s a complete ass—and even though Curtin takes the moral high road in this film, it’s still a bit difficult to know whom to root for. But I suppose that’s to be expected given that the story’s focus is the darker side of human nature.

Okay, so they’re searching for gold. It’s not a spoiler to reveal that they find some. The main part of the story is about both what they do with the gold and how the nature of their relationships changes as a result. Howard plays a key role in educating Dobbs and Curtin (and the viewer) about gold’s dangerous influences. In fact, just about all of his dialogue is like an entertaining textbook on the subject, e.g., “The Psychology of Prospecting.”

Don’t expect a happy ending, although by film’s end one is left with a feeling of hope for at least part of humanity.

So we have four “green” prospectors in SPARKS as opposed to MADRE’s two. One nice difference from the testosterone-charged MADRE is that two of the prospectors in SPARKS are women. Yes, Grace is female, too, but fundamentally, she’s fairly interchangeable with MADRE’s Howard. I found both of them equally appealing.

Again, it’s not a spoiler to reveal that the team finds a mine rich in pyrofluvium on a distant planet. The story deals with the aftermath of that discovery.

Romances develop between the prospectors, or should I say “hook ups” since the (m/f) bonds serve more to reflect the nature of prospecting and the negative impact they can have on relationships. As with MADRE, the characters aren’t always sympathetic and it’s difficult to know whom to root for at times.

In a very general sense, the plot structure of SPARKS is similar to MADRE. In fact, having read SPARKS first, it spoiled a few scenes in MADRE for me. Not in a bad way, but looking back, I think I would have preferred to see MADRE first, if for no other reason than it was first. Another reason I’d recommend seeing MADRE before SPARKS (if you’re game to try both) is because of the time period. One can witness human behavior in terms of the historical gold rush and then explore and reflect on the same behavior in a futuristic context.

Other similarities include some settings (e.g., a rundown hotel looks pretty much the same anywhere) and secondary characters. In both stories, something tragic happens to a key main character. While the dialogue in the two stories is completely different, MADRE and SPARKS share similar content and messages as delivered by the characters. Also, MADRE’s Dobbs and SPARKS’ Clayton share a quirky personal habit, but only in SPARKS does this habit lead to anything (yet another reason to watch MADRE first).

Overall, we’re talking serious homage action here. Watching MADRE after SPARKS was interesting in that I was able to see how the author re-imagined various elements. I also got a sense that the author was intensely curious about one particular unsolved "mystery" in MADRE, a mystery that he re-invented for his book and subsequently “solved.”

Where the two stories differ dramatically are the subplots and HEA. The space opera setting of SPARKS simply demanded a different direction at times. These differences are what would make consuming both stories worthwhile, because each has their own unique flavors. 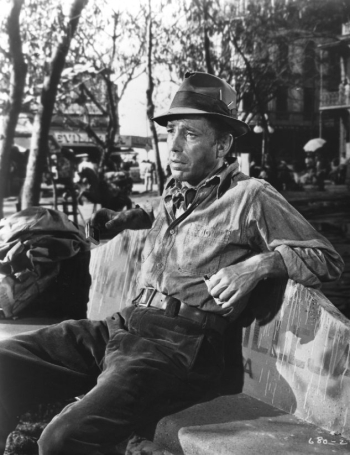 SPARKS has an HEA, and in that sense offers an alternative to MADRE’s dreary ending. As I mentioned earlier, MADRE’s ending does have a slice of hopefulness/happiness, and I wish the director had shot one extra brief scene to show that hopefulness (rather than just tell about it). I’d venture to say that budget limitations might have been a factor, because otherwise this one bit of hope just screamed to be told visually.

So here’s my basic conclusion about John Huston’s THE TREASURE OF THE SIERRA MADRE and Robert Appleton’s SPARKS IN COSMIC DUST. If you want to consume both stories, it’s worth it; however, I recommend watching the film first. You can then have fun spotting the homages in the book.

If you don’t care for older films and/or a romantic element is important to you, you can get a strong flavor of the film from the book. You will, however, miss some great performances.

Er, now, see what happens when a science fiction romance has something in common with a Western? I go all out!

To learn more about the development of SPARKS IN COSMIC DUST, you can check out Creating a SF Novel: Part I, Robert Appleton’s ongoing five part series at CONTACT – Infinite Futures. While there, you can enter for a chance to win one of his backlist SF titles while you’re at it, so get going while the prospecting’s good!

Postus Scriptus: Did you know…THE TREASURE OF THE SIERRA MADRE was based on…a book by author B. Traven? Happy reading!
Posted by Heather Massey at 9:43 AM
Newer Post Older Post Home