Will Sci-Fi Romance Escape The Brink of Extinction? Plus, an RT Book Reviews Giveaway 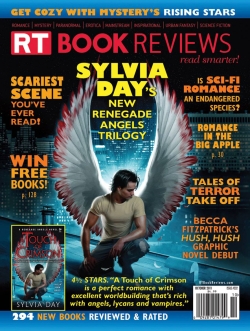 Check out this awesome coverage for science fiction romance, folks: The cover of the October 2011 RT Book Reviews poses the following question:

“Is Sci-Fi Romance An Endangered Species?”

Quelle horreur! Yes, my heart was pounding as I cracked the cover of the magazine and went straight to the featured article.

I must admit, though, that even before learning the title of the article within—“Whither the Sci-fi Romance?: For Fans, Finding This Genre Combo Means Hitting The ‘Net,” I’d been pondering the absolute dearth of sci-fi romance being released by the Big Six publishers (and Harlequin). Except for releases by Gini Koch, Marcella Burnard, Susan Grant, and Sara Creasy, it’s been slim pickings in the past year.

RT’s latest article on science fiction romance (by Faygie Levy and Elissa Petruzzi) tackles the Great Question Of Our Time, namely, “…why don’t we know about them?” Meaning, of course, sci-fi romances. What about this scary statistic disclosed in the article: among the magazine’s 2,700 books reviewed since January 2011, only 15 were labeled as “futuristic”?

Naturally, RT or any other review venue can’t help it if science fiction romance is still experiencing growing pains. The article raises a number of contributing factors regarding SFR’s low profile, many of which we’ve discussed here and elsewhere in the online SFR community. Still, the article points to the fact that if readers barely know the subgenre exists, how can they get excited about it? And to get them excited about it, the stories have to do something extra special. PLUS, the subgenre has to overcome ridiculous hurdles such as the struggling U.S. economy and competition from the paranormal romance juggernaut. As mighty as the Big Six publishers are, that’s a puzzle they have yet to solve.

On the other hand, perhaps they’re not meant to solve it at all.

So being the forward thinking publication that it is, RT Book Reviews explores in the article the role of digital publishing in sci-fi romance’s evolution. Read “Whither the Sci-fi Romance?” to find out which industry insiders are quoted and what they have to say about the topic.

The highlight of the article for me was the last paragraph, which addresses a key component of why mainstream print publishers seem to have a difficult time positioning science fiction romance. Want to see if you can guess what that is? I’ll give you a hint: it’s a vast, untapped audience.

But if you’ve read the article—the issue is on newsstands now—go ahead and share your thoughts anyway!

Now for the giveaway! RT Book Reviews’ Morgan Doremus has kindly provided copies of the October 2011 issue to give away to five passengers of The Galaxy Express!

Just think: you can have your very own copy of this issue, one that’s bound to become a collector’s item when science fiction romance hits the big time. You can then look back upon this moment while passionately clutching the magazine to your chest and say “I was there.”

To enter the giveaway, leave a comment with your answer to the question “Is Sci-Fi Romance An Endangered Species?” Or, if you’re feeling stumped, share the recipe for your favorite dessert (or the longitude and latitude of your favorite desert).

The winners will be picked by El Randomizer. The deadline to enter is 6 p.m. EST on Sunday, September 4, 2011. Contest is limited to U.S. residents.