Tagged! THE ADVENTURES OF MISS UPTON AND THE SKY PIRATE by C.J. Archer 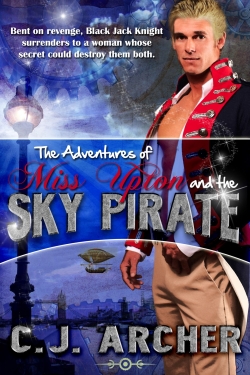 I learned about C.J. Archer's THE ADVENTURES OF MISS UPTON AND THE SKY PIRATE from a reader who posted a review of the book at Posterus.com. This is a case where reliable word-of-mouth can help a self-published book find new readers. Since the reviewer had already vetted this steampunk romance, I felt it was worth checking out.
Still, since this is a self-published title, I read the review first to make sure there wasn’t anything about it that might frustrate me. I can forgive plot/character flaws, but if the writing doesn’t live up to the premise, then I’m more hesitant to take the plunge. Normally I avoid reviews, but not knowing if the story had been vetted by an editor made me more cautious.
The review didn’t turn up any red flags, so I went ahead and bought the book. Frankly, I enjoyed it more than some other steampunk romances I had obtained from established digital publishers. THE ADVENTURES OF MISS UPTON AND THE SKY PIRATE isn’t without flaws, and I could see places where it could have used a good editor, but I found it entertaining enough to finish.
Here’s the story blurb:

Tilda Upton's talent at finding things with the aid of a talisman puts her on the edge of the dangerous hellhag category. Rather inexperienced in using her magic, she's prone to mistakes. It is one such mistake that lands her in debt to the Chief Royal Inventor who blackmails her into retrieving an Oriental and his machine. But to find the Oriental she needs to intercept an airship and the best way to do that is through piracy.

Tilda turns to the notorious Black Jack Knight, a sky pirate known for his cruelty and cleverness who dislikes passengers, particularly of the female variety. Fortunately for Tilda he accepts a currency she can provide—the location of a man who witnessed his brother's murder, a murder which Jack was falsely accused of committing. Together they fight corsairs, a mad inventor and their growing attraction to each other in order to retrieve the man Tilda has been forced to find, only to learn his machine could destroy her.

Just because the story is a steampunk romance, however, doesn’t mean it’s for every reader. Therefore, I would like to tag it for you (without spoilers).
Genre-wise, THE ADVENTURES OF MISS UPTON AND THE SKY PIRATE is action-adventure steampunk romance in an alternate Victorian England setting. It seemed about a 60:40 romance to steampunk ratio.
Tone: Light-hearted—so much so that it read like a young adult story at times. There was a clear delineation between good and evil, sometimes at the cost of nuance. The conflict is on the mild side, and there’s also quite a few comedic moments. But if you like a “feel good” story that does the work for you, then the above aspects may be a plus.
The story features a few fights/bar brawls, some of which seemed straight out of an Errol Flynn film.
Tech:
* Airships and (brief) airship battles. Airships and their functions are mostly described in terms of ocean navy vessels.
* Infernal devices: There are several and some of them are integral to the plot; however they don’t get a significant amount of stage time (mainly because of the action-adventure and romance elements).
* A wee bit o’ Steampunk weaponry
As noted in the blurb, the setting is a mix of magic (telekinesis/divination/healing magic) and science-based steampunk. This is a go-along-for-the-ride setting since I can’t recall a clear explanation for why magic and steampunk co-exist at that particular time.
Heroine: Tilda is plucky, bold, and headstrong. She’s pretty much what you’d expect from a progressive heroine in an action-adventure steampunk tale. This story is very much about her coming-of-age.
The hero is a pirate, but in terms of badass quotient Jack reminded me most of Westley (Cary Elwes) from THE PRINCESS BRIDE film. Remember how Westley was also the Dread Pirate Roberts? Yeah, it was kind of like that. A pirate with a heart of gold. He’s threatening without being a threat, if you know what I mean.
Romance/heat level: Despite the story’s YA tone at times, this is definitely for adult readers. Not erotic, though. There’s sexual tension throughout and it’s effective. I thought that Tilda and Jack had some nice, although somewhat predictable, chemistry.
The standard romance relies on many traditional tropes, but if you go in with the expectation of an escapist read then that could be a positive.
Social commentary? Yes, kind of a magic vs. science debate, although with limited reach.
Queen Victoria cameo: The queen makes an appearance and has an interesting scene, but her treatment is fairly mundane when compared to her steampunk’d character in George Mann’s THE AFFINITY BRIDGE. Mann’s take pretty much spoiled Victoria’s character for me when it comes to steampunk (creating an almost impossibly high standard), but your mileage may vary.
The above covers the major elements. All in all, I mostly felt as though I got my money’s worth. It really helped that the title does a great job of setting up reader expectation.
I hope this helped you decide if THE ADVENTURES OF MISS UPTON AND THE SKY PIRATE is right for you.
If you want to sample C.J. Archer’s work for free, check out her “Triton’s Tavern,” a piece of flash fiction featured on vvb32 Reads. The story is set in the same universe as the book. Also, I searched the author’s blog for tidbits about the book, so if you’re interested in learning about the book’s evolution as well as an excerpt, click here (scroll down).
Joyfully yours,
Heather
Posted by Heather Massey at 7:57 PM
Newer Post Older Post Home