Interview With Ophidia Cox, Author of THE CYBERKINK SIDESHOW 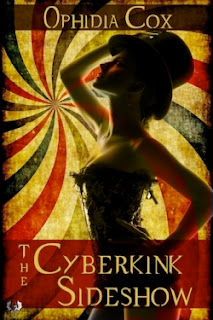 I’ll give it to you straight up:
THE CYBERKINK SIDESHOW is a weird, kinky story coupled with a rather sweet coming-out-of-the-closet story for Sylvia. There’s also lots of dry, understated humor and gateway protagonist action that tempers the strangeness.

While the story does feature a strong attraction between Sylvia and hero Victor—along with a courtship of sorts and a Happily For Now—the focus is more on their sexual journey together and Sylvia’s sexual awakenings.
THE CYBERKINK SIDESHOW is my first foray into BDSM territory, which I’ve been meaning to try for a while. Let me tell ya—I sure learned a lot about the BDSM lifestyle I didn’t know before! For me, the extraordinary nature of the futuristic sideshow circus setting made the BDSM element more interesting than might otherwise have been the case. I’m sure the story is meant to titillate, but I was heavily tapping into the social commentary and enjoyed that aspect most of all.
The story has a few cyberpunk elements, one of which is integral to solving the mystery. I also enjoyed reading about how certain technology was adapted for entertainment purposes in the story’s “Cyberkink Sideshow.” When it comes to plots in science fiction romance, I don’t often think about the role of futuristic tech in the entertainment (outside of throwaway passages referring to a character watching a “vid”), so it made for interesting reading. Come to think of it, I wouldn’t mind reading more SFR stories that feature entertainment-related plots.
Because THE CYBERKINK SIDESHOW goes to some pretty edgy places, I invited Ophidia Cox aboard for an interview so I could pick her brain about the story behind the story.
Here is what she had to say:
The Galaxy Express: The idea of circus “freaks” lends itself to any number and type of stories, past, present, or future. What in particular inspired you to write THE CYBERKINK SIDESHOW?
Ophidia Cox: Two main things. The first was a Victorian photograph that appeared on a blog called ‘Men in Full’. This picture was part of a series taken by Charles Eisenmann of nude sideshow freaks, and showed circus fat man Chauncey Morlan. Although the photographer claimed the photographs were for purposes of scientific curiosity, the way the people were depicted to me had a sense of voyeuristic sensuality.
The second was a memory I have. In the story, the Cyberkink Sideshow is one of many attractions at something called the National Garden Festival. The original National Garden Festivals were a series of events meant to regenerate old industrial sites in England, where huge areas were converted into beautiful parks full of sculptures and flower displays and exhibits and fairground rides.
I went to one of these festivals when I was nine years old and I thought it was the most amazing and weird thing ever. There was a rollercoaster and a Ferris wheel and a monorail that looked like a caterpillar, and there were all these places you could go into that were creepy, a bit like ‘haunted houses’, but educational at the same time. For example, there was an electricity hut where you would go through dark corridors and there would be forked lightning effects and thunder noises, and a room full of plasma globes you could touch.

And there was a ‘healthy lifestyle’ hut where you had to choose doors to go through ― kind of patronising really, but bizarre and a lot of fun: the ‘smoking’ choice was a smelly room was full of punchbag-like foam cigarettes hanging from the ceiling that you had to fight your way through, with recordings of people coughing playing in the background.
So from this I had the idea of a new National Garden Festival, rather more high-tech than the original ones. The sideshow would be a highly controversial adult-only attraction, featuring all the same sorts of freaks as would be in its Victorian counterpart, with one difference — in this sideshow, the exhibits would be uninhibited. The rude personal questions the public might think to ask, such as ‘how do they have sex?’ would be part of the display. And all this would be completely consensual, with the show being owned and run by the performers.
TGE: To me, the sideshow acts featured in the story have a strong sense of authenticity. I wouldn’t be surprised to learn that they have real-life counterparts. What, if any, type of research did you do for this story?
OC: When I had the idea for the story, I was reluctant to write a vanilla erotic romance book that was purely about a woman and a sideshow fat man as I suspected that would be too niche and a lot of the traditional audience for this genre would be turned off by it. I had the idea of the police detective looking for futuristic contraband as a subplot as something that would hopefully add a bit of pacing and tension.
The publisher of The Cyberkink Sideshow, Lyrical Press, was at the time specifically looking for BDSM erotica. I’ve read BDSM magazines before, and something I found particularly interesting is that often in the personals you see in these magazines, people are asking for a partner with a particular fetish and actually specifying that the sex, age, and appearance of that partner are unimportant. Someone I know who enjoys BDSM porn says he prefers the women in it because they don’t have monstrous breasts like in ordinary porn. From this I get the impression that with a lot of BDSM people, the fetish or the act is so much more important to them than simple ideas of what’s conventionally attractive. I hope that by catering for the BDSM market, the book will be enjoyed by fetishists who are more flexible about the characters’ appearances as well as with people who like fat men.
Vaughn the dungeonmaster, a secondary character who appears in the ménage scenes, is outwardly very much a sub’s generic fantasy. He plays the visual aspect of his role well, with leather clothing and a pierced nipple, but he also has a rather disconcerting sense of humour and salt-of-the-earth character, and he designs his own torture equipment and runs a business.
One thing I did research a lot was the urethral sounding and p-spot stuff. Looking on the Internet, this sort of penetration enjoyment seems to be discreetly popular amongst quite a lot of men. I think it’s quite an interesting fetish and that it would be nice to include it in the book. The electrosex sounds kind of futuristic, but electrosex actually already exists and you can buy equipment for it very similar to that described in the book.
TGE: Where did you get the idea for the cybernetic link Sylvia has with her dog, Max?
OC: Someone was telling me about a scientist who had spent millions of pounds designing and making a machine that could detect drugs and illnesses on people’s breath. I thought, rather than doing all this, why not just train a dog to identify smells? After all, the sense of smell of a dog is extremely sensitive, and dogs are smart and cuddly and machines aren't. I put in the idea of having the police officer be able to interface to the dog and identify what he was smelling because it was a fun futuristic idea that made the crime detection side of the story that bit more immersive.
TGE: I enjoyed reading about plump hero Victor Maynard. And he’s really plump, namely a Sumo-wrestler-style of plump. However, even in his case, beauty is only skin deep. What appeals to you about heroes like Victor? How are they different from the more traditional types of romance heroes?
OC: I like fat bodies because they are voluptuous and sexy and tactile and extravagant, and, well, big and imposing in the case of men. Victor is a very confident person who accepts and celebrates his own body. Frequently in the book he takes on the role of ‘sub’ ― being tied up in potentially very humiliating positions and handing over total control to other characters such as Sylvia and the dungeonmaster. But he also takes on the role of dom sometimes, and in this position he can be assertive and exude sexual power.
I find a lot of romance heroes unsatisfying, firstly because I don’t care for the stringy/muscly bodybuilder look and find either more filled-out or svelte male bodies more attractive, and secondly in that they simply go way too far down the assertive side of trying to be hard men. You get the impression that these men would squirm and feel embarrassed and emasculated if someone tied them up. They don’t have that confidence. There’s this popular idea of ‘Alpha Hero’ the psychology of which can be traced back to men in prisons fighting to set up a brutal hierarchy amongst themselves, never showing any vulnerability. To willingly show vulnerability takes a lot of self-acceptance and trust. There are other ways to be manly or heroic apart from pumping iron and looking lumpy.

TGE: What do you think readers have to look forward to in niche erotica/ romance along the same lines as The Cyberkink Sideshow?
OC: I think the way publishing is at the moment is an exciting time for niche fiction of all kinds. On one hand, traditional publishing is contracting and editors are taking on fewer and fewer books, and the books they do buy, if they buy anything at all from new writers, need to be in genres that are easy to market and sell. That’s bad news for anything alternative or niche or otherwise off the beaten path, unless the author is already firmly established and selling well.
On the other hand, electronic publishers are really starting to get a foothold in the market and several have been making a tidy profit for a number of years. Lyrical Press, the publisher of The Cyberkink Sideshow, includes the slogan ‘If you dare to write it, we dare to consider it’ on its submission guidelines page. It even seems to make exceptions for standard guidelines of good taste where a taboo topic is justified in terms of a story or setting, for example, one of Lyrical’s books is about an incestuous relationship set in ancient Egypt, a culture where incestuous marriage is historically justified. A small publisher that concentrates on electronic doesn’t have to rely on selling huge numbers of books in order to make a profit. It can choose to publish quality fiction in less prominent areas and sell it to the small market that’s interested in it. I hope small publishers will continue to make available niche fiction for people with non-mainstream tastes.
TGE: Where can readers find you and your books?
OC: As is traditional for BDSM writers, I’m kind of ‘underground’ lol. Or perhaps it’s more because I’ve not got round to sorting out a website yet. I do write other books under various pseudonyms, but they’re intended for different (tamer!) audiences. However, I do currently have one other piece of fiction out: a dystopian tragic romance called ‘Slaves of our Servants’. It’s a short story available in electronic format on Amazon and Smashwords.

Ms. Cox, thanks for your time, and for your art.