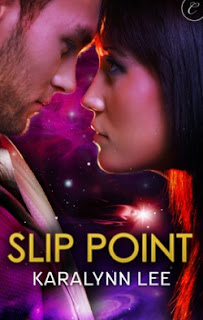 Yes, can you believe how lucky we are? A new science fiction romance release, Karalynn Lee’s SLIP POINT (Carina Press), features a heroine who’s a space pirate. Seems like it was only a year ago that I blogged about my love of space pirates—oh, wait a minute, it was a year ago. But I have a particular soft spot for heroine space pirates, and so I was excited to learn about SLIP POINT, which releases November 7!
Author Karalynn Lee kindly agreed to an interview so we could learn more about her book. Plus, one lucky passenger will be picked at random to receive a free digital copy of her book! Details follow the interview.
First, here’s the story blurb:

From childhood, Shay had one dream--to join the Space Corps with her best friend and sweetheart, Jayce. When the Space Corps reveals that the father she thought was dead is actually an infamous pirate and rejects her application, the dream dies and she leaves the planet without saying a word to Jayce.

Ten years later, Shay is a pirate herself. She captains her own ship and has earned a reputation as one of the slipperiest pilots around. That's why she's recruited for a dangerous secret government mission. But the cargo she's assigned to smuggle turns out to be a woman with a government bodyguard--Jayce.
Jayce never thought he'd see Shay again, and when the mission forces them together on her ship, he isn't sure he can forgive her for deserting him; but their desire for each other is stronger than ever. Jayce knows he wants to be with Shay, but how can he trust a woman who's both a pirate and the girl who broke his heart?

Now, on to the space swashbuckling interview!
The Galaxy Express: Tell us about SLIP POINT in the form of one or two-word tags.
Karalynn Lee: Space pirates, reunited lovers, infiltration, diplomacy.
TGE: You’re an author of two fantasy romances, DEMON’S FALL and SUMMER-SET. What inspired you to write a science fiction romance this time around?
KL: I suspect that most writers write what they'd like to read more of, and I'm no exception -- I grew up reading both fantasy and science fiction and excavating whatever romantic elements I could find in them. What scared me about writing science fiction was the need to actually integrate science fact (or at least convincing science fakery), and with an astrophysicist brother-in-law, I don't get a lot of slack. I finally got around it by taking a hard look at a lot of space operas I enjoy and realizing that they contain just as much hand-waving and fantastical elements as fantasy.

TGE: Okay, so you had me at “Shay is a pirate.” Who are your favorite space pirates from either books, films, or television shows?
KL: I'm a big fan of the crew in Firefly, flitting as they do around the edges of the Alliance and somehow building a family out of it. I love that they undertake scurrilous tasks and yet you can't help but root for them. And they fit right into the grittiness of their world; I was won over by the way Mal dealt with Crow in "The Train Job."
TGE: What makes Shay different from her predecessors?
The problem with most space pirates is that, quite realistically, they tend to be the bad guys -- pretty nasty bad guys, at that. You get to see Shay before she becomes one, which I think softens her in the reader's perception. She's practical enough to make it as a pirate, but she loves the freedom of having her own ship more than anything, and she eventually realizes that she doesn't have to terrorize other people in order to have that. She has principles and sticks to them, leaving the more distasteful runs to her father, but it's implied that she had to exhibit her share of ruthlessness in order to win that privilege.
TGE: I’m traveling to Shay and Jayce’s universe next week. Do you have any travel tips for me?
KL: Want to visit a bustling space station? Stick to the Hub worlds, where nearby slip points mean there's a constant influx of travelers and technology. You're only limited to what your credits can buy.
If you want something quieter or maybe out from under the eye of the law, head on out to the Rim colonies, where people are roughing it and a spaceship sighting might be the big event of the year. (Tourists are responsible for ensuring they re-board ships before departure time.)
TGE: What can readers expect from the heat level in SLIP POINT?
KL: You'll find a couple of sex scenes in moderate detail, but nothing unfamiliar to a regular romance reader. After all, if you throw together two ex's and a strong dash of adrenaline, what else is going to happen?
TGE: What can readers look forward to from you?
KL: My next big project is actually a story told in Choose-Your-Own-Adventure-style -- fairytale-based fantasy, I'm afraid. But I do occasionally post some shortpieces on my website, and I'm planning to add more science fiction stories there. And someday I'd love to tackle a post-apocalyptic or cyberpunk setting.
Ms. Lee, thank you for your time, and for your art.
Here are the giveaway details, as promised. Leave a comment and be entered for a chance to win a digital copy of Karalynn Lee’s sci-fi romance SLIP POINT. Available formats: PDF; ePub.
Aye, the deadline to enter is 12 midnight, EST, on Friday, November 11, 2011.
Joyfully yours,
Heather
Posted by Heather Massey at 5:00 PM
Newer Post Older Post Home