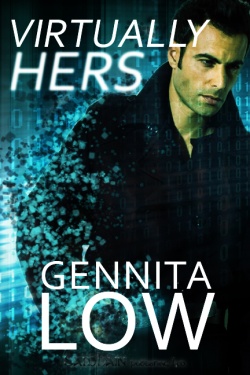 A few weeks ago, a little birdie kindly sent me a print copy of Gennita Low’s VIRTUALLY HERS (2009) to recycle the book. (I lurv going with the green, baby!) I noticed the story had a cyberpunk-military SF combo for the win, so I decided to check it out even though this is the second in a series that begins with VIRTUALLY HIS (2007).
Samhain Publishing describes VIRTUALLY HERS as “Romantic Suspense,” but there are very strong erotic elements as well. Surprisingly, the story begins with lots of worldbuilding and military acronyms. I mean, like wall-to-wall. Okay, so that’s taking a risk and I love a good risk in sci-fi romance, cool beans.
But then…but then…one particular scene of forced seduction came along and I had to put the book down for some serious reflection on what I had just experienced.
Please note that I fully support readers who enjoy a forced seduction fantasy in romance. I've enjoyed a few myself. Ultimately, this post isn't about VIRTUALLY HERS. Rather, my experience with the part of the book I read is a jumping point for me to share my thoughts on the topic of forced seduction in a futuristic/alternate tech-based setting. This story took the forced seduction trope in directions I never anticipated and really made me think about some of the ingredients that go into a successful erotic sci-fi romance.
[Mature content advisory—adults only] [Beware spoilers]
First, the setup:

The heroine, Helen “Hell” Roston, is part of a covert remote viewing experiment run by the military. As “an agent trained to spy remote targets with the mind” (p. 24), she was tapped to fill the position because her telepathic abilities and psychological profile were the strongest of all the candidates.
The hero, COS Commander Jed McNeil, is “an expert in mind-manipulation games” (per the jacket copy) and also Helen's monitor. His job is to enter the virtual world and interpret what she sees. From what I could gather, remote viewing isn’t an exact science. They are both part of “the experiment of synchronizing brainwaves for deep immersive virtual realty.” (p. 32)
The hero decides to initiate virtual sex with Helen in order to help channel her telepathic powers. (I wasn’t clear on whether or not this course of action was officially sanctioned by his superiors.). And to accomplish that, Jed needs to deceive her:

He knew he’d need to prep her mind for his access and to do that, he’d have to gain her trust through trickery. Once couldn’t be direct about it because if she’d known, Helen would have mentally fought against it.(p. 28)

I think that’s a big assumption to make, especially in light of the following knowledge that Jed has about how to leverage the most benefit from remote viewing:

He’d accepted the assignment to create a binding mental awareness between Helen and him, so that it could be the bridge for them as she remote viewed in virtual reality. The easiest and fastest way—seduction. The need for, and the sharing of, sexual release created an emotional bond between couples. Add that with the need for someone specific, and there was now a powerful mental focus. Perfect for remote viewing. Perfect for virtual reality. (p. 45)

If sexual release creates an emotional bond between couples, then why, on page 28, was Jed thinking this: “Seduction of mind and body. He’d done it before without getting too emotionally involved.”? [emphasis mine]
Basically, Jed is given permission to justify the forced seduction (and borderline virtual rape) because it's all done in the name of the mission.
The “hero” does not obtain Helen’s informed consent for the sex. He feels it’s in her best interest to keep her ignorant about his real-life identity because “A strong woman like Helen would have her guard up once she found out his identity.”(p. 34)
Helen does become suspicious and goes looking for her monitor, i.e., Jed using virtual reality (Admittedly, I'm not clear on the motivations of the characters at this point). Jed anticipates her search and during a virtual reality session starts imagining Helen in a swimming pool (underwater) on her hands and knees and secured by chains. The heroine then picks up on this imagery and finds herself in a virtual pool. Soon after, she assumes the position imagined by the hero and experiences the chains. Then she feels someone “straddling” her:

She opened her eyes. She couldn’t move her hands. Or feet. She was chained to the bottom of the pool now, on all fours. She pulled at the iron clasps. A shadow at the periphery of her vision. She tried to turn her head to see but he was already straddling her from behind…
…And Hades [Jed’s avatar] was straddling her, pushing his erection inside her…Trapped on the tiled floor, she couldn’t move… (p. 50)

If I didn't know this was from a romance, I would have thought it was a straight-up rape scene from a thriller. According to Jed, “The sexual fantasy had to be the imprinter in control of the imprintee’s pleasure.” (p.50)
My interpretation of the text is that Jed—a military soldier—had no qualms about deceiving the heroine in this way. I didn’t pick up on any feelings of guilt or regret. It was for the mission, and he received sexual gratification in the process, so as a reader are we supposed to think, yay him? That’s not my understanding of ethical behavior for a military soldier, nor am I convinced that his forced seduction is an effective strategy for the remote viewing program.
I’m not clear on why non-consensual sex is in either Helen's best interest or the mission’s. Plausibility issues aside, if a “powerful mental focus” generated by an “emotional bond” was ideal, why couldn’t Helen and Jed have worked consensually on developing a bond that would lead to them being a great team? In other words, why couldn’t the sexual energy used to fuel the remote viewing have been generated by consensual sex?
I can see the why there's interest in the forced seduction fantasy in a historical romance. In those stories, at least much of the time, religious/political forces exist that suppress a heroine’s sexual freedom. It's a fantasy that some readers enjoy as a way of escaping or processing their own real-life constraints.
However, what VIRTUALLY HERS reinforced for me is that I have doubts about the forced seduction trope being successfully translated to a futuristic/tech based setting *unless* the author specifically creates a world to justify its presence.
To summarize, my personal experience with VIRTUALLY HERS was this:
a) I didn't want and certainly didn’t expect the forced seduction fantasy, especially in an SFR (nothing in the story blurb alerted me to it, unless you count this line: “And the very real sexual chemistry that sizzles between Hell and her trainer is messing with her head even more.”). In that sense, this was a case of reader-story mismatch. Your mileage may vary.
b) Regardless of the hero’s theories, I didn't buy that the heroine was the type to need forced seduction given the near-future feel of the setting. Nothing in the setting informed me that this heroine was sexually repressed and needed "permission" to have and enjoy sex.
c) The setting/plot didn't justify the use of forced seduction for me. The text didn’t offer a compelling reason (to me) why mind manipulation and “seduction of mind and body” were the *only* ways Jed could help Helen boost her remote viewing abilities. Jed used forced seduction for the mission, which in effect invites both the heroine and the reader to condone his behavior.

d) I realized I’m not keen on technology being used as a tool for forced seduction, especially when said technology is being used for the greater good. I questioned the ethics of both Jed’s behavior and the type of military that would condone, even if indirectly, forced seduction during the course of a mission.
VIRTUALLY HERS may offer some readers a desired forced seduction fantasy if you're not too worried about how it meshes with the setting. But for readers who want more than just the fantasy, my hope is that science fiction romance can also be known as a subgenre that offers stories with plausible forced seduction fantasies if authors choose to write them.
We can have it all in science fiction romance, and be smart about it too, y’know?

What are your thoughts about forced seduction in sci-fi romance?
Joyfully yours,
Heather