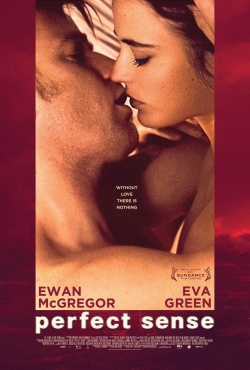 I was fooling around at apple.com/trailers yesterday and discovered the trailer for PERFECT SENSE, a film that blends SF and romance. I love stumbling upon sci-fi romances like this!

The film’s tagline is “Without love, there is nothing” and stars Eva Green and Ewan McGregor. It debuted at the 2011 Sundance Film Festival and will release in US theaters in February 2012.
Here’s the set up courtesy of a review of the film at DIY:

It is a bizarre mixture of science fiction and romance, set in a near future where a rapidly moving and mysterious plague is gradually robbing the world's population of each of their senses. Epidemiologist Susan (Eva Green) and chef Michael (Ewan McGregor), who both consider themselves immune to love, meet amid the slow disintegration of the world this causes, and despite their cynicism eventually fall in love.

And here’s the official trailer:

I also found a Q&A with the director. Here's a snippet:


Q: Were there any films that inspired Perfect Sense?

David MacKenzie: There were three I had in mind when I was trying to work out how to approach the film. One’s a British cult film called Radio On, which is a road movie from the early 80s. It has lot of music in it and was done in a minimalist style. Another was Jean-Luc Godard’s Alphaville, which is futuristic but has a minimal palette. And the third was a movie by Chris Marker called La Jetée, which maybe more of you have seen. The idea of telling big stories on a small palette was what I was looking for, and ultimately what I was trying to do.

As far as the film's ending, I figure there probably won’t be a traditional kind of HEA—or maybe no HEA at all. Still, my interest is definitely piqued.
Do you have any interest in seeing PERFECT SENSE? If so, will you go to the theater or wait for the DVD/Blu-ray release?
Joyfully yours,
Heather
Posted by Heather Massey at 6:00 PM
Newer Post Older Post Home