JOHN CARTER is from Mars, And Women Are Nowhere In Sight 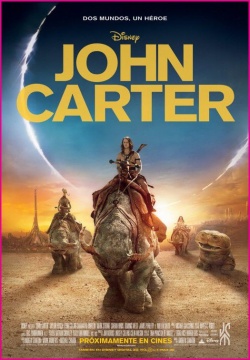 Via SF Signal I recently read 5 Reasons Disney’s John Carter Failed At The Box Office at Giant Freakin Robot. I'm excited about JOHN CARTER, but the film's very existence still surprises me. (I’ve not seen it yet, but plan to watch it on DVD.)
Frankly, JOHN CARTER is pretty hardcore vintage SF/F for mainstream audiences. I’m delighted it was made, but have my doubts regarding packaging it as a mainstream, PG-13 blockbuster-style film.
To confound the lukewarm reception of JOHN CARTER, both the film and its trailers demonstrate an obstacle that continues to plague science fiction romance in the cinematic realm. One part of the GFR post in particular caught my attention:

What you wouldn’t know just from watching the trailers is that John Carter is kind of romantic. Part of the reason Avatar was such a huge success is that it appealed to women as much or more than it appealed to men. That movie’s trailers weren’t shy about playing up the romance angle, crafting Cameron’s film as a tale of forbidden love. John Carter’s trailers act as though the film was constructed primarily to create pictures which might look good on a little boy’s lunchbox. There’s very little romance in them and worse, very little of the film’s strong, take charge female character Dejah Thoris. Dejah Thoris is a warrior scientist, and arguably the movie’s most important character. She’s the kind of strong woman every parent wants their daughter to turn into. That’s not in the trailer. If she was shown at all in the trailer, it was only to ask John Carter for help and then stand behind him while he defended her. Young girls should probably look up to a character like Dejah Thoris, but from the movie’s marketing, those girls probably didn’t even realize she was an important part of the movie’s story.

Kind of depressing, isn’t it? The marketing campaign for JOHN CARTER either didn’t know how to target female viewers—and viewers who enjoy sci-fi romance—for a science fiction film or, more likely, didn’t see the need to. They’ll market the film to 12 year old boys, but not to adult women who will actually pay money to see it? Okaaaayyy.
Actually, I find this example of Hollywood’s blind eye very depressing. I noticed from the beginning that Dejah lacked a significant presence in the trailers as well as the fact that when she was shown, she wasn’t doing a gosh darn thing.
Luckily, we have Lisa Paitz Spindler, who profiled Dejah Thoris in her Danger Gal series. Ms. Spindler saw JOHN CARTER and gave us the lowdown on how the story approached the female characters. Here’s an intriguing excerpt from her article:

Also, we’re not just told that Thoris is a great warrior and super-smart, we’re shown it. As I said above, I would have loved to have seen Thoris’ laboratory, but at least we are shown her not only demonstrating her Ninth Ray device, but also solving the story’s problems. We also get to see Thoris in battle including some cheeky flirty dialogue with Carter about whom should stand behind whom doing the protecting. Collins also bulked up for the role on top of her already considerable martial arts skills, something that always lends an aura of credibility to female and male action heroes alike.

JOHN CARTER seems to have issues besides the failure of marketing to play up the sci-fi romance angle, but in light of Ms. Spindler’s insights, I can’t help but believe that ramping up the romance element would have spun the film as about characters rather than just SF spectacle. If the studio had tweaked the trailers so that Dejah had a stronger role, they might have had a stronger domestic box office take as a result.
But no, they had to underestimate yet again the female film audience, as well as males who enjoy character-driven SF. *Deep sigh*
Okay, I know what you’re thinking—Disney probably designed JOHN CARTER and its trailers with more of the international audience in mind. Still, I hardly think that the foreign box office profits would have suffered by showcasing both Dejah and the romance in at least one of the trailers.
If I had known from the JOHN CARTER trailers that Dejah played a significant role, I might have rushed out to see it in the theater. And who knows—at that point I might have gone online to share the news with as many people as I could….
Perhaps next time Disney or any other studio won’t be so quick to dismiss viewers of the female persuasion.
Joyfully yours,
Heather
Posted by Heather Massey at 9:06 PM
Newer Post Older Post Home