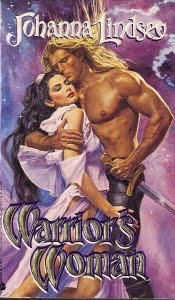 Back in January 2010, I blogged about how I struggled to read Johanna Lindsey’s WARRIOR’S WOMAN (1990). I had difficulty engaging with the prose style more than the content itself. A few months ago, a little birdie who follows this blog urged me to give it another try. She’s convincing like that. :P
So, I skimmed finished it. My goal this time around was to study the subtext more than the story. I am always interested in discovering where science fiction romance has gone before because I often gain insights about its evolution as well as a strong appreciation of where this subgenre is today. I still struggled with the prose in WARRIOR’S WOMAN (some of the stuff just didn’t make sense to me), but I persisted.
One dynamic in particular caused a bit of head-scratching. As a highly trained security agent, heroine Tedra De Arr is a warrior. She feels that she can only find true love with a lover/hero who can defeat her in combat. I could understand if she had wanted to find her warrior equal in a soul mate. But that wasn’t the case. She needed a man who was superior to her in that regard.
I’m not sure what I’m supposed to take away from that element, unless one strips away the story, the characterization, the worldbuilding, and the romance. That, of course, leaves the love scenes. If I approach this story as a veiled message to women that they are allowed to enjoy sex, well, okay…I guess. But the plot and other mechanisms went about it in such a strange and convoluted way that I feared the message became lost in translation.
Anyway, the main element I wanted to point out was that an underlying message of WARRIOR’S WOMAN, whether intended or not, was that a man is not a real man if he isn’t superior to a woman, at least where combat is concerned. Or maybe the story was trying to say that if a man can’t beat you in combat, then he’s not good enough for you. Either way, something about it didn’t gel for me. 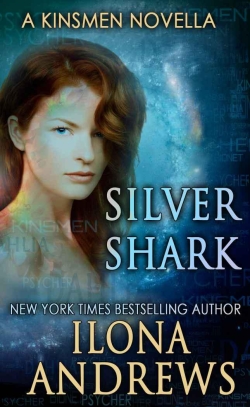 Therefore, when I read SILVER SHARK (Kinsmen Series #2), a self-published sci-fi romance e-novella by Ilona Andrews, Lindsey’s book was fairly fresh in my mind. I will endeavor to avoid spoilers as much as possible, but a slight one is dead ahead.
The least you need to know is that SILVER SHARK features a hero and heroine who are both warriors. They meet on a futuristic version of the Web known as a “bionet.” At one point in the story, their conflicting goals lead to them battling each other in a virtual combat scene while in the bionet.
What happens at the end of the combat scene represents the polar opposite of the dynamic I encountered in WARRIOR’S WOMAN. And this was a very good thing because I expected an old-school trope but instead received a new-school trope. I’m afraid to say more because I don’t want to spoil the moment for anyone who intends to read it. Suffice it to say that Venturo, among other SFR heroes I’ve read about in recent years, is a hero with a refreshing attitude toward his warrior woman (pun intended!). He appreciates and admires what the heroine brings to the table rather than viewing her as a woman to be tamed or a lover whose talents he tolerates with affectionate condescension.
The underlying message of SILVER SHARK is about more than simply validating women’s rights to sexual pleasure. This story, and others like it (see: SYNTHETIC DREAMS by Kim Knox), takes a more holistic and feminist approach to romance. These are stories where a woman’s skill set is just as much of a turn on for the hero as her looks. And that kind of approach is a big turn on for this reader.
Joyfully yours,
Heather
Posted by Heather Massey at 7:35 PM
Newer Post Older Post Home