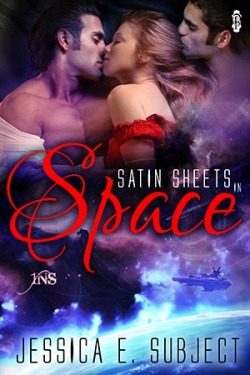 To help celebrate these new additions to the SFR universe, the author came aboard for an interview. She’s also giving away an Amazon.com e-gift card to one lucky passenger (details follow the interview).

TGE: What’s the Hollywood elevator pitch for AN UNEXPECTED RETURN?

TGE: In general, what types of science fiction elements do you like to explore in your stories?


JES: Most include varies types of aliens who travel through space using many different techniques. They are generally more romance than science fiction, and deal with interracial (interspecies) relationships.

TGE: What kind of heat level can readers expect from these releases?

TGE: AN UNEXPECTED RETURN features a blue-skinned hero on the cover. Given that the depiction of alien characters is pretty rare on romance ebook covers, why did you and Decadent decide to go that route?

JES: In this case, it was simply being true to the character. Aris comes from Tyto, where everyone has blue skin. I have other blue aliens in some of my stories, but they travel to Earth and are able to blend in rather than stick out. In An Unexpected Return, the planet Elatia is a tourist destination for the various systems surrounding it. Having aliens there who are blue or gold, extremely tall or short, even covered in scales is not something that would make the Elatians pause like here on Earth.

TGE: Describe your last science fiction romance sighting (e.g., a film you watched, a book or article you read).

JES: I’m actually reading Forever Across the Stars by Azura Ice, which is the first story to be released in the Elatia line. There are many more science fiction romance stories on my bookshelf and ereader, waiting to be read. As for films, I don’t get to watch them as often as I’d like. But I am looking forward to seeing Men In Black III.
TGE: What else can readers look forward to from you?

JES: Sudden Breakaway (May to December/Interracial/Science Fiction Romance) is coming soon to Decadent’s 1Night Stand line, and The Power of Three (Paranormal Erotica) will release soon as part of The Edge line.


I plan to continue the multiple series that I’ve started, work on some more super short stories, and write a new series and some individual stories.

Ms. Subject, thanks for your time, and for your art.

In addition to the author’s blog, you can connect with her on Twitter, Facebook, Backward Momentum (sci-fi romance blog) Google +, and Goodreads.

Now for the giveaway! Leave a comment for this post—including your email address—and you’ll be entered for a chance to win a $5 Amazon.com e-gift card!

You tell me: Who is your favorite interspecies couples in books, film, and/or television?