An Interview With Author D.G. Novak, Plus Giveaway 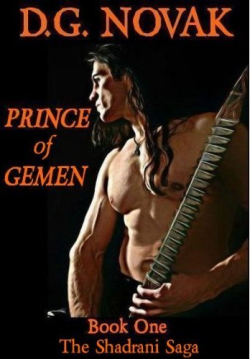 Author D.G. Novak has been busy, busy, busy at work on a science fiction romance universe she’s named the Shadrani Series. Here’s the introduction from her site:

Imagine a people so attractive, so vital, so sexually enticing that they have been hunted, enslaved, and persecuted for over five hundred years. Imagine that there are creatures from all over the universe who would kill to own them. These are the Shadrani.

The author has written and re-released/self-published four of a planned multi-book series. She goes on to explain that she “…created a world that is a challenge to long held beliefs about sexual stereotypes, gender roles and sexuality in general...”

That’s a curiosity-building statement if there ever was one, especially since sci-fi romance is well-suited to embracing diversity and challenging our assumptions about exactly those things.

The Shadrani Series launched with PRINCE OF GEMEN. Book four, STE. CLAIRE, releases July 30. I invited D.G. Novak aboard so she could tell us about her series. Following the interview are the details of the giveaway, so read on!

The Galaxy Express: What inspired you to write the Shadrani series?


D.G. Novak: That’s a tough question to answer --so many things inspired me.  I got the idea for the story thirty years ago, and then it just started to grow and change as I did. A great deal of it grew out of my passion to discover what love, sexuality and gender really mean – maybe it would be more clear to say what they should really mean.

TGE: If you were a travel agent, how would you describe your Shadrani universe to first-time visitors?

DGN: Get ready for something different. This world will challenge what you believe about gender, love and sexuality.  It will take you to places that will bring you to laughter and tears. At times, it will also make you extremely uncomfortable and cause you to question what you know about the very fabric of morality.

TGE: How would you categorize the stories? Are they strictly sci-fi romance or are there fantasy/paranormal elements in them as well?

DGN: All of the above, I would say.  I try to write books that I would like to read myself, so I have incorporated all of the genres that I love throughout the series. 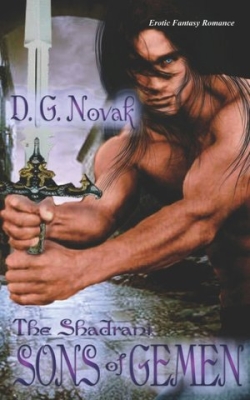 TGE: In a general way, what kinds of heroes and heroines can readers expect from the stories?

DGN: Dark, complicated, and unpredictable, but also lots of humour there.

TGE: Do the books stand alone or should they be read in order?

DGN: I tried, I really did, but they just have to be read in order.  It’s a long and complicated story and if you picked a book up in the middle, you’d probably pitch it across the room.

TGE: How would you describe the heat level/erotic elements in this series?

DGN: Depends on the book.  Book One is a love story, plain and simple, and has some very steamy scenes.  Book Two is a story about war and subjugation – totally different.  There is a love story there too, but a very different kind.

TGE: Can you share a brief excerpt from PRINCE OF GEMEN?

DGN: Here is a scene between the two main characters, Erone and Calli:

“Ow!” Danae cried. “Erone, it hurts!”
The Prince of Gemen bent to quickly gather his young nephew into his arms. “Where do you hurt, little fox?”
Danae pointed to his ankle. “Take me to Calli! Please!”
Erone grimaced as he strode toward the chambers where Calli had set up her new practice and her new home.
This was the last thing he needed.
He’d increased his chira to two hours a day and almost exhausted himself every night with Gadrel, but he couldn’t banish the devouring hunger that Calli had awakened in him. As a last resort, he used distance, both emotional and physical, to keep up the walls between them. But now the physical boundaries, at least, were about to be crossed.
When Calli opened to his knock, her eyes widened in surprise. They stood for a moment before Erone remembered why he had come.
“Danae has hurt himself.”
Calli stepped back quickly and ushered them in, then indicated to Erone to put Danae on the table in the center of the room. This done, the prince moved as far away from her as he could, into the corner where he crossed his arms and leaned back against the wall. Still, his eyes devoured the sight of her as she stroked a hand through Danae’s thick black hair and smiled into his eyes.
“Now, where does it hurt?”
He pointed at his ankle. Calli lifted it gently and began to probe delicately.
“Does this hurt?” she asked.
The little one shook his head.
“How about this?”
Again the shake.
“This?”
“Uh-uh,” he said.
Calli frowned, then cast a glance at the prince. Even in the dark shadows, she saw the glow of desire in his eyes and she drew in her breath sharply at the rush of heat that swept her senses.
“What happened to him?” she managed.
“I don’t know,” he replied, his voice husky. “He was on the ground when I found him.”
She tore her eyes away from Erone and tried to focus on Danae.
“Did you fall?”
He nodded.
She lifted him and set him on the floor.
“Can you walk at all, Danae?”
He took a step and then lifted his foot and cried out again. But, Calli noticed, it seemed to be the other foot that hurt this time. She picked him up, set him on the table and looked to Erone.
“May I speak with him alone for a moment?”
The prince looked mildly surprised, but then turned and left without comment. When he was gone, Calli leaned on the table, her face close to Danae’s.
“Now, what’s this about? There is nothing wrong with your ankle.”
Danae looked sheepish and studied his fingers.
“Danae?” she pressed.
“I...just want you and Erone to like each other.”
Calli stood back and drew a deep breath as she placed her hands on her hips. Great Tsandis! How to explain this to a little boy?
“We do like each other,” she attempted. “It’s just that we...well, we have to sort out some things, that’s all.”
He looked up. “What things?”
She ran a hand through his hair. “Grownup things, darling,” she finished. “I’m going to take you back to your uncle, and I don’t want any more of these pretend accidents, okay?”
He nodded. She lifted him into her arms and carried him to the door.
When Erone went to take him, Danae wriggled away and jumped down.
“Calli fixed me!” he called out and took off down the path.
Erone stared after him. “That was quite a cure.”
Calli laughed and when he turned back to her, their eyes locked for an intense moment. Calli looked away first, studying the ground, her shoes, anything but the man standing before her, sending her body into traitorous torrents of want.
Erone knew he should leave, intended to leave, but his heart somehow managed to overrule his mind and he remained rooted to the spot, fumbling with the braiding on his belt and searching for something to say.
He felt like a twelve-year-old.
“Are you...enjoying this new position?” he said finally.
She nodded, wishing that he’d go, wanting desperately for him to stay. His nearness was suffocating.
“Tell me, where did you learn this...art of medicine?”
She swallowed. “There’s a Healer named Jala in the city. He...found it in his heart to teach me.”
When he could think of nothing more to say, Erone still stood there, studying her, causing the intensity between them to build until Calli could no longer avert her eyes. She looked up at him and saw her own feelings reflected painfully in his face. She knew he was going to reach up and touch her cheek, knew it and knew she had to stop it, for the moment he touched her, she was lost...they were both lost.
“My lord,” she said quickly. “Isn’t there something to which you must attend?”
He shook himself as if coming back from a distance, cleared his throat and nodded.
Then he turned and was gone.
When he had left, Calli leaned against the doorpost and let out a long breath.

DGN: I love The Terminator Series (yes-it is a romance as far as I’m concerned), Fifth Element, Avatar, all the Star Trek stuff (there are always love stories running through those). One of my favorite love stories of all time is that of Aragorn and Arwen from Lord of the Rings, and I read that when I was about eleven.

DGN: There should be seven or eight books in the Shadrani series.  Then there is a character, Sentelian, who shows up later in the story, and he has so captivated me that I’ve decided to write a continuing spin-off series for him.  I also have lots of other ideas for single books that I am looking forward to getting to once my Shadrani Saga is finished. Lots of ideas zipping around in my head.

***
Ms. Novak, thanks for your time, and for your art. To learn more about D.G. Novak and her work, visit her Web site and Facebook page.

Now for the giveaway! D.G. Novak is giving away a digital PDF copy of PRINCE OF GEMEN to *two* lucky passengers! Entering is easy peasy—simply leave a comment for this post. To make it more fun, name your favorite film/television sci-fi romance couple.

You have until midnight on Friday, July 27 (EST) to enter.