To Host A Blog Tour Post Or Not To Host? 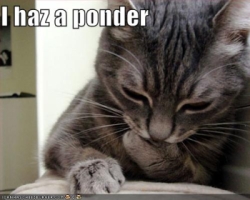 Increasingly this past year, I’ve been approached by authors of sci-fi romance for blog tour spots. That’s been one indicator that more science fiction romances are being published, which is great. However, I haven’t fully committed to including blog tour posts on a regular basis for the simple reason that I don’t want to overextend myself.

In general, I still only blog about three times a week because I like to put as much effort as possible into my posts. And while a guest post doesn’t require that much extra time, they could quickly add up. I’m also not sure that I want to risk supplanting my regular blogging days (Sunday-Tuesday-Thursday) with too many guest posts.

Therefore, as a rule, I’ve been declining author requests for guest posts. I’ve done interviews, of course, since that’s a feature I’ve been doing from the beginning. Little bit of a loophole, there. ;)

Another reason I’ve been reluctant to go the blog tour route is because I’ve seen too many posts that are obvious rush-jobs or scant in nature. Sometimes they are little more than a paragraph about some topic and then the rest is blatant promotion. I tend to feel cheated if that’s the case, especially when a particular post title caught my interest.

On the other hand, I don’t want you to miss out on content that you’re interested in receiving. The opportunity for author guest posts/more interviews definitely exists. And more exposure benefits science fiction romance as a whole.

Certainly there is something to be said for having basic posting guidelines, which would alleviate concerns about sub-par content to an extent.

Your feedback would be helpful because if there’s a big call for blog tour content, then I need to consider opening up TGE for that. I could manage my schedule by posting extra content over the weekend as much as possible.

Any input you have would be great, but I also have some general questions to help streamline the process:

* Would you be interested in seeing blog tour features here?

* If so, would you prefer author interviews, guest posts, or a mix? Or something else altogether, say, a simple posting of the blurb and cover so you can learn about new titles. Another idea is that I could make the content strictly informational, like posting blog tour schedules/dates if authors can make them available.

*Would you be more interested in guest posts/interviews if there was a giveaway attached (most would probably be digital)?

Thanks for your time!