Boogaloo, boogaloo, boogaloo! It’s a fun word to say *and* write! Now that I’ve got that out of my system, I’m here to share that romantic comedy author Lucy Woodhull has released RAGNAR AND JULIET 2: CONCUBINE BOOGALOO (2012, Liquid Silver Books), the sequel to her 2011 comedic sci-fi romance (see my post about the first book here.)

The cover for RAGNAR AND JULIET is one of my favorites and it was a treat to see the theme continued for book two: 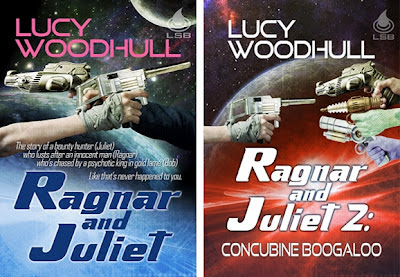 Cue the LOL!  Not only that, but CONCUBINE BOOGALOO features the same couple, a rarity in SFR. So if you like that kind of continuity in your science fiction romance, along with tails, epic wacky in-law drama, and manageable hair, then this is the two-book special for you.

Sometimes the biggest risk a lady can take is not battling an evil planetary emperor with questionable taste in muttonchops, but baring her heart to the alien she loves.  And his tail.

If you’re a bounty-hunting floozy with a stellar rack, what do you do when an evil despot is hell-bent on your destruction?

Stage a coup of his planet, of course.

Juliet Lawrence’s plans for defeating King Bob the Nefarious are going better than her relationship with hunky alien ship captain, Ragnar Manscape.  Oh, the sex is great.  His pecs and their laughs are top notch.  The meeting with his parents goes … somewhat worse.  It’s always a bad sign when your boyfriend’s folks choose the family spider over you.

The secret Juliet’s been keeping from Ragnar doesn’t help—uncomfortable conversations about “feelings” are not her forte. Fortunately, Juliet has lots of time to plot the downfall of King Bob’s intergalactic concubine slave trade once Ragnar unceremoniously dumps her.


I invited Lucy Woodhull aboard to tell us about the making of this book. Following my interview with her is a giveaway. Enjoy!

The Galaxy Express: Congratulations on the release of RAGNAR AND JULIET 2: CONCUBINE BOOGALOO! Please tag the story in six words.

Lucy Woodhull: freedom, feminist, sci-fi (it is so one word!), tail, love, acceptance

TGE: Did you envision the Ragnar and Juliet adventures as a series from the beginning?

LW: Not from the very beginning -- I'm a pantser, not a plotter, so it's all a question mark to me when I first dive in.  By the time I got to the end of the first book, I knew I wanted to write the next one; the story wasn't finished.

TGE: Sci-fi romances that feature the same couple over the course of a series are extremely rare. Was there any resistance to your decision to follow the same couple in book 2?

LW: Nope.  Ha!  That was a boring answer.  But no -- I wrote the sequel, sent it to my publisher, they accepted it.  Yay!  I never really think about what is rare in my genre.  I write to serve the characters and the story, and to make people laugh.

TGE: Your stories fall under the comedic SF umbrella. Even the blurbs are stuffed full of humor. Comedy-wise, who/what are your influences?

LW: Mel Brooks is my number one hero.  One time, I got to see him introduce a double feature (Young Frankenstein and The Producers) and he spoke for five minutes, telling stories and whatnot.  I sobbed the whole time.  Literally sobbed.  I embarrassed the hell out of my husband, but he's used to that.  Seeing my idol in person, being funny and charming, I was just overwhelmed at the genius in front of me, at the man who'd brought me so many hours of brilliant laughs.  Of course, I cry at the drop of an anything, so what are you gonna do?  I love Monty Python, naturally.  I also admire tons of amazing, funny women -- Tina Fey, Amy Poehler, Kristen Wiig, Melissa McCarthy.  The ladies are hilarious -- who knew?!

TGE: If Juliet were to tell a knock-knock joke to distract one of King Bob’s goons, what would it be?

The goon scratches his most-oozey scab.  "Knock what?"

Goon swivels his head from side to side.  "Someone's there?  I don't see nobody."

Juliet couldn't quite roll her eyes, seeing as he was trying to choke her to death.  "You know who's there?" she croaks.  "Boobs!"  She tears open her blouse.  Buttons bounce off his sweaty forehead, and he drops his hold on her neck, which she considers real progress.

She kicks him in the nuts and runs.  He wasn't any good at this whole "knock, knock" thing, anyhow.

LW: I'd rate Ragnar and Juliet at about a 6 out of 10, considering 10 to be lots of group sex involving whipped topping.  Ragnar and Juliet 2: Concubine Boogaloo is more like an 7.  There are more sexy times in the sequel -- I know what my depraved readers like, God love 'em.

1.  Before he became a trader, Ragnar dreamed of playing Tail Ball professionally.  However, he refused to use appendage-enhancing drugs, so couldn't make the cut.
2.  He once won a "Best Buns" contest, beating even the entrant from Gluteus 4.
3.  His favorite non-Alutian author is Judy Blume.

TGE: I need to stock up on holiday gifts. Where can I purchase some flying toilets?

LW: They're not on sale anywhere per se, but I can point you to some reputable dealers for both toilets and jet packs.  A couple of bungee cords later, you've got yourself a super unsafe john.  Only give them to relatives you don't like very much.

TGE: What’s next for Ragnar and Juliet?

LW: Concubine Boogaloo was the second and final title in the series -- (spoiler) our star-crossed lovers get their happily-ever-after, which they deserve after all the crap I put them through!

TGE: What are you thinking about right now?

LW: My husband is making some end tables for us (he's a gifted carpenter) and is running back and forth getting tools and such.  I was just thinking how damn cute he is when he's being all woodworkey.  Really sweaty, but cute.  Harrison Ford was a carpenter, too, so basically I'm married to Han Solo.

Ms. Woodhull, thanks so much for your time, and for your art.

Now for the giveaway! Lucy Woodhull has generously provided a copy of RAGNAR AND JULIET and RAGNAR AND JULIET: CONCUBINE BOOGALOO to give away to one lucky passenger! Winner’s choice ePub or PDF.

The deadline to enter is Sunday, 12 midnight PST.

To enter, create a word (or make up a word and tell me what it means) from “Boogaloo” in the comment section!